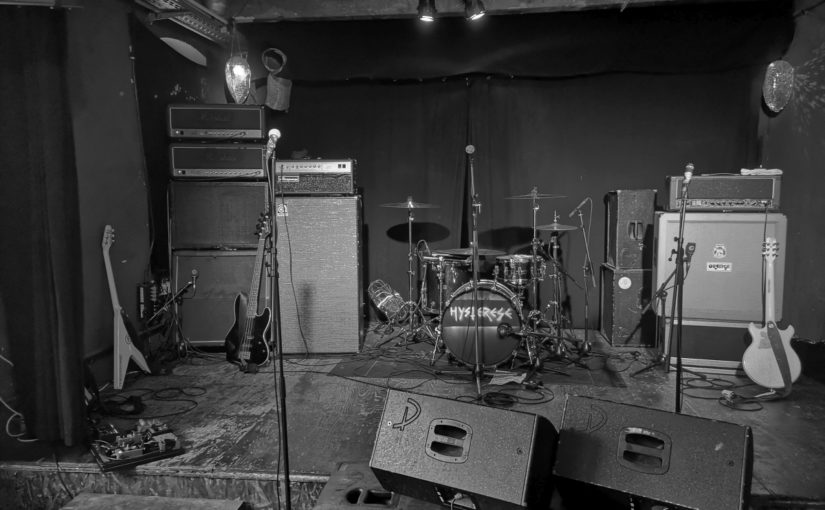 On this hot Hamburg evening it was the return of Hysterese, who are around since 2011 but have not been back to Hamburg since 2016. And i saw them only once in 2014 but was forever glued onto their sound. And given the sunny weather, that fact that the Hafenklang is just a short stroll down the street and given that i faced two weeks off from work it was sure a booked show. And a big surprise that actually plenty of folks made way to see them: It wasn’t packed but it was well attended, so hopefully a good share for the band.

Over the years they got their sound perfected and also put a unique visual identity onto the stage: Guitar left & right, Bass center and with the back to the audience. And – as a professional musican in the audience noted – driven by a precision drummer. That topped with large amps provided the perfect setup for a good bulldozing and that is what Hysterese did:

Burst of high energy punk with both feet down into both H/C, Punk and scents of pop. And sure thing the added bonus of dual guitars and dual male/female vocals, that is such a positive addition to sound that i’d wish more bands would dare to try that (no, i won’t stop preaching the added value of the female contingent on stage).

They barraged through a short set (i’d recon 12 songs) with most songs clocking in above 2 minutes and well below 3 minutes, so in the range of the perfect pop song. They did not interact with the audience a lot, they concentrated on the sweaty task of pushing our chord after chord.

I am fixed in my brain on certain songs, they trigger a little spark that goes off and tells me „…listen up mate, this is a perfect song!„. Hysterese are one of the few German bands that have set that spark off, it is their – at least to my account – top hit from their first album:

And sure thing that little beauty came right down from the stage, full power and with brilliant guitar play. Listen up youth and sing-a-long:

Done, sold, just fucking great. As ever, i wonder how they would grace if they are paired with something bigger on a bigger stage. They got the capability, they got the chords and they got the beauty to assemble it all well.

The internet (damn internet, never forgets) praises their new record just like this:

And to that extend here is one beauty from said record, recorded at Rama Studio – no overdubs – 100% Live one take! Get it on!

Did i note i am sold on them? And because i nowadays tend to buy records only at shows and ideally from the band i took the „all three LP’s for 35€“ offer and threw away the download code – these beauties are to be put under the needle rather!

And next time round? Next time round i expect me mate Thomas to donate more (he was noted down in the big book of generous moods) and i expect even more people to show up – Hysterese are worth it.