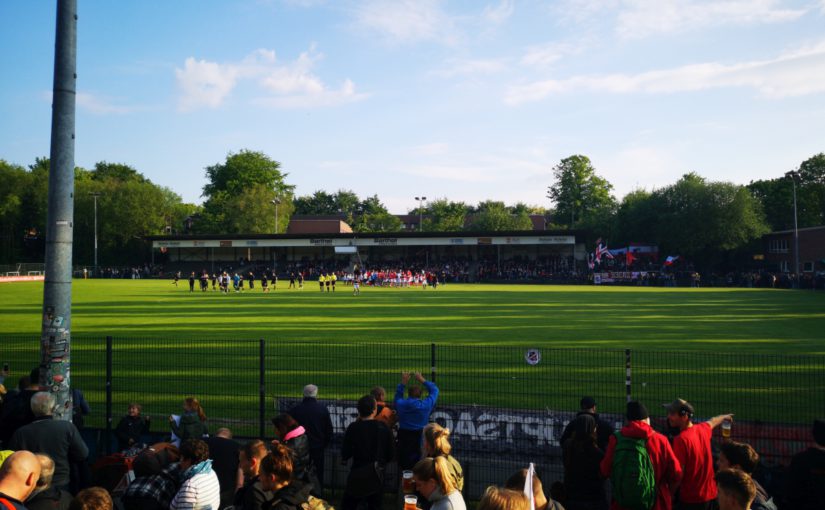 Knock Off have coined the “Football, Beer and Punk Rock” theme and on this Friday me and 3 mates took it on full steam. First on the most local Derby possible in the Danish part of Hamburg (and the top match to conclude the season in the Oberliga Hamburg): Altonaer FC von 1893 vs. FC Teutonia 1905. The Altona clash. Followed by Wonk Unit at the Monkeys – what a great May evening!

The AFC has it’s own contingent of “Football, Beer and Punk Rock” fans for years, many of them locals and some of them disgruntled FCSP Fans (and some of them even more disgruntled HSV fans).  But this season both Altona teams were top of the League and AFC did win the season right prior to this last game. As such it was a boring game were only Teutonia put an effort in and rightfully did win.

Nevermind future risks, the rather packed stands provided great amateur football feeling (paired with incompetent Beer supply) and gave the team a great cheer when they came around after the final whistle with a large”Hamburger Meister 2019” flag. Kings of the city indeed.

Vomit started in 1977 and disbanded in 1980, without a career. They phrase it nowadays as “Very lively punk rock band that play classic 70’s style punk songs. BEST SEEN LIVE!!! OR BEST SEEN WHILST STILL ALIVE!!!” and indeed i would not buy a record (but maybe a T-Shirt, they had some cool ones).

And they have structured their set to allow for interludes, this time round it was the constant joke and repetition of “Cyclists”. All sorts of variations where put forward and when there was a choice of next song to be made Alex did check back with the audience if not “Cyclists” would make the audience happy.

Last time the Pointed Sticks Europe Tour was dropped short notice, as such many of the lot in Hamburg where quite happy that in 2019 a fresh attempt was made to get us to savior that Canadian Power Pop that has sustained the test of time.

Timing of that show though turned out to be more of a nightmare, first there was footie (18:30 Kick off) and then there was also a conflicting show at the Monkeys (with TV Smith & Duncan Reid). On top of that the Molotow (for whatever reason) demoted the show upstairs to the Skybar and to an early start (18:00 doors, 19:00 Support and 20:00 them Sticks). Conflict all over.

Me and two mates choose one half of footie and thus dropping the majority of the support, others choose to drop footie at all.

Those who dropped footie at all where the clear winners, another goalless performance by the Boys in Brown and thus continued questions around the ability of the coach to drive consistent performance and improvements (and he indeed is the reason why i don’t cover footie currently in my blog).

So with an urge to get out we scooted from the stadium to the Molotow and got the last bit of Sheep On A Tree. Hake, the singer, is most likely the most knowledgeable person when it comes to Power Pop with a Punk background as such he was very eager to have them Sheeps supporting them Sticks.

For the short bit i saw Sheep On A Tree sounded just great, despite Hake having been moaning on social media recently that the band was hiding from him (and practices). Tight, hard and fast and Hake getting the message across. In hindsight my choice of footie was wrong, i should have devoted my time to Sheep On A Tree. Period.

Next on Pointed Sticks and i am now making a wild guess: Half of the audience was only ever there because 1990s and later American Pop Punk bands covered them – the other (older) half was there because they came across them in the early 80s. Here is how they looked in Dennis Hopper’s 1980 movie “Out Of The Blue“:

They have been around with local success (and, given they signed for Stiff at one time, international recognition too) from 1978 to 1981 and came back together in 2006 with some regular shows and some new output (next to a plethora compilations, best off’s, re-releases).

The good thing though is that it is still the same people, well aged. And here is how they took ownership of the Molotow Sky Bar:

Great sound, great light and most likely the 2nd best band backdrop behind the drummer i have ever seen (it looked like a ripped t-shirt). Love that humble attitude!

Fun fact: The drummer looked really old but did a stunning job (eagerly eyed by some of the local drummers in attendance, who raised more than one eyebrow and more than one surprise smile).

They started with some upbeat songs and sounded very well: An almost lightweight 80s power pop sound (thanks for sure to the keyboard) and not over paced (and error some bands that come together sometimes do).

They did lack consistent stage attire but at least they had a stage trick: Singer and keyboard had a drink being served to the stage by their tour manager after three songs. That is the wild life of world wide rock’n’roll i guess.

The initial songs got quite some cheering but i sensed in the middle of the set that the audience was bit more reserved. Their detailed discography is not at my mind at all times, i can only assume they slotted in some songs lesser known.

Towards the end came more upbeat and sing-a-long songs, some covers (where the Beatles cover could have been dropped but i guess because of the proximity to where the Beatles played in the 1960s in Hamburg they wanted to do it) and it all accumulated into the one song that for many defines them:

Somehow it must be frustrating for a musician i guess, feels a bit “one hit wonder“. It also does not do them justice, as they are indeed a gifted power pop outfit with a much wider œuvre than that song.

Appreciation by the audience at that point was large not to say enthusiastic. So enthusiastic that they did break the early curfew opposed on them and gave a Sonics cover as their final song.

Great show by a long lost beauty. And quite surprising how many people after the show got records, t-shirts, tickets and god knows what signed. I was stunned and i guess that small but tight circle of devotees keeps them Sticks floating and enjoying. I did read that Japan was the sheer reason for them to get on again in 2006 and bet ya out there it is even more crazy.

Now back to square one – did the singer had a bald scalp (he is now hiding under a hat) back then? No, he sure had not:

Just like Maniac the day prior in the depths of the Komet cellar the Pointed Sticks up there in the Sky Bar should have deserved a bigger stage and a bigger audience beyond Punk Rock record collectors.

Nevermind, thanks for finally gracing our shores in style my Canadian friends! Your are welcome to return! 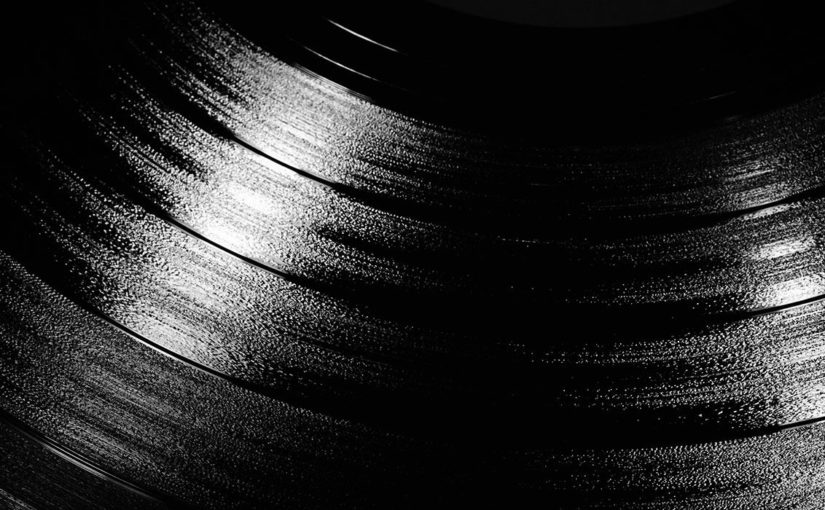 Fer fucks sake – i just realized that the review of the Fucked Up show was my blog entry 1000 and that i completely omitted to capitalize on that little fun fact.

04.08.2011 marks the day i put this up, whilst the domain was in my possession actually many more years. But back then i decided to put www.oldpunks.de on permanent hiatus and go back expanding a wee bit more, just like in the early 80’s when i was putting out a small fanzine.

And now we are in 2019 and i have passed a thousand blags, wow. The only item i still don’t know is how many readers actually enjoy this shit. And what they enjoy. If you want to fill some of the void, just leave a comment.

Else it is fast forward to more books, more shows and, eventually, back to some footie.

D. – Custodian of the Archive