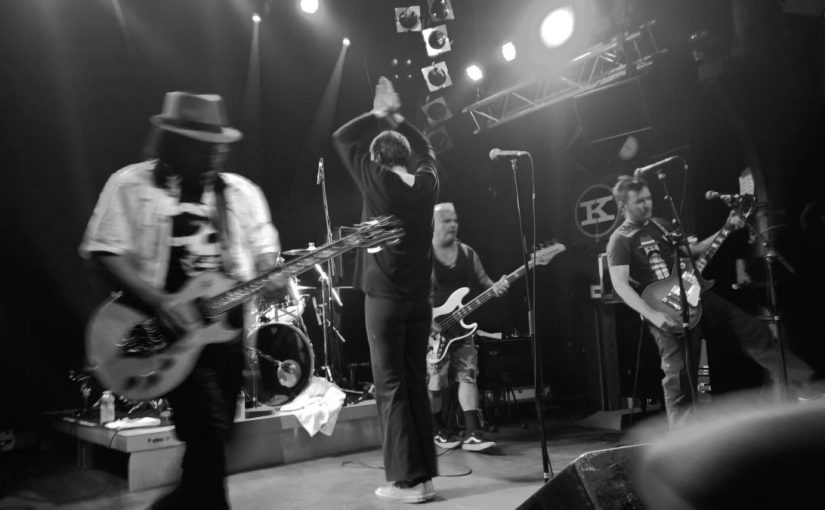 It is August and thus the Rebellion-itch is with many people – those who do the pilgrimage and those in Hamburg who need to decide what shows to see, as many bands use the short hop to Hamburg to add a couple of shows. It is oversupply times dear Bookers!

The Knust spared no expenses and rented a ritual dancing secret society to perform a ritual dance in front of the venue in order to lure people into the club. About 180 followed, which created some open space in the club that easily hold double the capacity. I’ll take it is down to another odd 100 folks from Hamburg ditching this show as they will see them next weekend in Blackpool.

Kick off was for Shirley D. Pressed who claim their mu-sick as “Poorly played Skatepunk since 2007” and who made no impression on the audience as far as i can make out. They sounded too much No FX, too much Epitaph or Fat Wreck for my liking and lacked the genuine “this is us” moment. But judge yerself:

I only watched a couple of songs and resorted back outside to engage with friends and listen to their Rebellion plans.

After some re-arrangements on stage The Dickies greeted the audience with their ode to Rosemary (and a little hick-up on the stage entry backdrop music):

It ain’t only the band – there is a new PA in the Knust and the sound is stunningly clear. And from there The Dickies took us through their catchy tunes and covers, all with a shitload of humour and comic style.

Stan Lee the ever smiling hat wearing guitar hero, Leonard the quirky singer plus their younger backdrop: Adam the well dressed drummer, Ed Tater the sturdy bass player and a new guy on guitar (as far as i could make out).

It was hit-on-hit but it was also a wee bit short (and lacking some songs i would have selected). When querying Stan Lee after the show why they did not play their cover extraordinäre “See my way” he agreed that it a class item but adding songs to the setlist with Leonard “… is like pulling teeth“. So after 40 minutes they called it a day.

Warning! They dropped “Killer Klowns” and pulled “Rosemary” to the start of the set – so do not just copy this into setlist.fm you donkey who has not been there!

And that giant mutant baby? He and his friend annoyed the majority of the audience, got two times what he deserved and he and his family generally made a laugh out of themselves. Pointless but well justified pit violence: Hey, THAT is punk rock you dickhead. Keep telling us you invented punk rock and that your behaviours are the only correct ones … makes our day.

This song thus is for you: