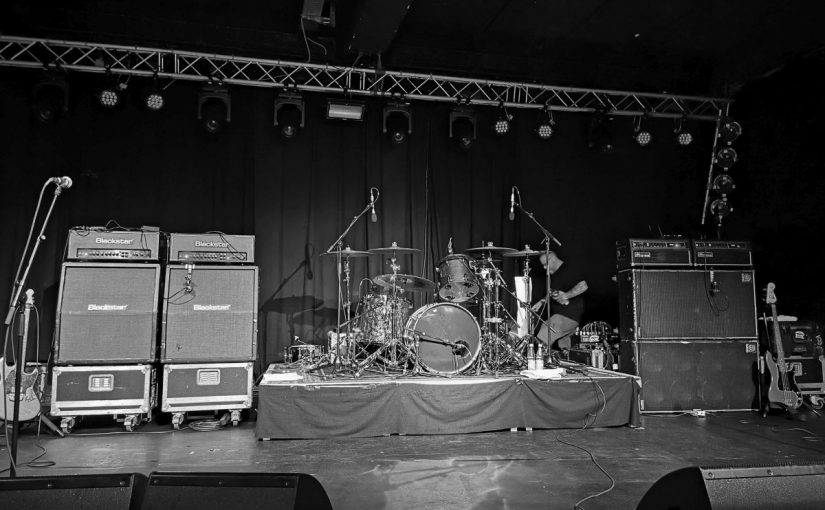 Last time World Tourage (a neat euphemism) stopped in Hannover (2019, actually) there where plenty of folks from Hamburg who took the trip down south to Hannover. This year many where already en-route to Blackpool for Rebellion on the weekend, so the Hamburg contingent was rather small, though i met some surprise connoisseurs.

We took sail rather early from Hamburg on a hot & sweaty day and managed to get down to Hannover without a single traffic issue, on top we found a parking spot just next to the Faust – perfect. We knew that MakeWar would take the stage very early and we also realized once there that due to Holidays, still raging Covid and maybe a zillion other individual issues the show would be far from being sold out.

MakeWar we dropped, we rather had a beer, a bite and a chat in the lovely beer garden of the Faust.

When we decided to head into the Faust i was surprised how empty it felt, my guess would be that roughly 450 people attended (and i guess the Faust can hold ~700). A bit of a let down for the Descendents. Putting it into perspective i would also guess that in Hamburg, if they would have played the Markthalle again, it would have been similarly a feeling of emptyness.

A Wilhelm Scream i only ever saw in context of the Descendents, be it support in Hamburg or a the Open Air Festival in Barcelona, both in 2018. Both times they did not appeal to me at all, thus i decided to give them a full 3rd chance now.

Unfortunately they still do not resonate with me, too much of their sound is up an alley that i just do not savour. Their biggest asset to me is that everyone to the front is actually singing, so they got some nice multi-vocal songs and choruses. Also, after the show, they turned out generally friendly, interested and humble people. But for me it did not help, it is not my mu-sick.

Thanks to the Rock Star setting their equipment was moved off stage quickly and we had an unobstructed view towards Stephens twin Blackstar Amp & Speakers, Bills massive Drums and Karls twin Ampeg Amp & Speakers. If you bring me blindfolded into a club and just show me that setting – i would instantaneously know the Descendents are on.

And what where the on for tonight?

Comparing to the last EU Shows a bit of a mix, a couple of standards where dropped in favor of some new stuff and the whole thing took an upside down makeover. I was eager by now and sharp at 21:20 (+/-) Stephen, Karl, Bill and Milo took the stage.

For the first couple of songs the sound on our end of the stage, just in front of Stephen, was terrible – the guitar almost non-existent. Luckily this was fixed and further down the set it was audible in the right way but by and large i was not happy with the sound. Maybe the lack of audience shifted resonances or whatever, i have seen and heard much better sound in the past.

Still, the lot had fun and also the band was smiling down from the stage. More to the center of the stage, fronting Milo, was actually a large female contingent having extra fun and being protected from the pit by that one pole – a lucky spot indeed.

How did it sound? As i was not happy with the sound i did not bother to take a video but me mate Beno did, so here is the ode to that little girl in pursuit of partying, using sex to get her drugs and alcohol. As she becomes the village bike, everyone gets a ride…

They played a hot SO36 the night before and i had the feeling that they where a bit exhausted. Somehow it came across as rushing through the set though it could also be down to the simple fact that i did sing-a-long to almost all songs and it went by like a fly.

Perfect away game though we came home feeling like having seen a good draw rather than a mighty away win. But as it was over early it meant we could all be in bed like 01:00 and get up at 06:00 for work, which we did.

Whilst some in Blackpool did hope that the Descendents would jump in to fill the Bad Religion vacancy short notice it was clear from their rooster that this won’t happen. But good to see them spending more than two weeks in Europe, lets hope that this will be the regular pattern for the future (and lets also hope they continue to alternate between Hannover and home sweet home).

PS: I have smart friends. Some just ask to hand a thanks to the band (which i did to Bill), some bring on some nice gifts. If you want to taste it, get your Descendents coffee brew down below (Click!Bait!).