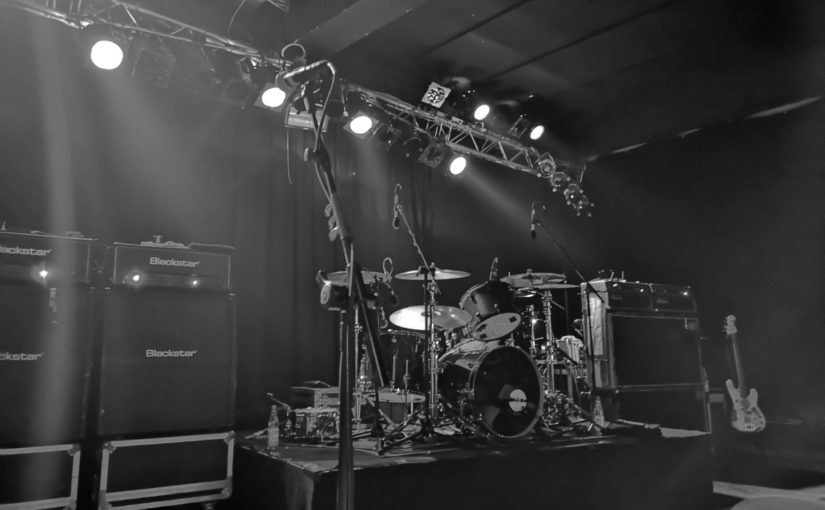 When this years summer stint of the Descendents in Europe was confirmed i got quite eager to see where they would take camp besides known events like Punk Rock Holiday or Rebellion. To my surprise it was Hannover and the rather small Kulturzentrum Faust.

The good thing: I got 4 tickets (equals a car full of friends) on Day One of the ticket sale. The other good thing: Hannover is like only 160 KM south of Hamburg, so in reach of a quick ride.

The bad thing? It would be a weekday and it would be during peak traffic. The even worse thing? Construction on the motorway, narrowing it from three to a single lane. Paired with a chain of trucks, broken down trucks and end of summer school holidays this resulted in queues. Long and slow queues. It took us from our after work meeting point in Altona more than 3 hours to get there… … only to realize that No Sugar (who had a slightly longer drive) got stuck and could not make it in time at all.

As we spent way too much time in the car we were thirsty and hungry, so instead of Useless ID we had a drink and a bite at the Faust with the other folks from Hamburg who made their way. We got a bit of the end of Useless ID and for my liking they are just way too soft. That type of Fat Wreck mu-sick that i happily let go.

Many people in the packed Faust left for fresh air after the Useless ID set, the Hamburg lot rather advanced to the front of the stage to make sure it can live out it’s Descendents appreciation. Fandom. Support. Whatever.

Most important things first: A scan of the setlist. And 30+ songs would wait for us, with a pretty good spread (though missing like 30+ favorites).

As the Descendents did the headliner rock’n’roll setup (support had to setup in front of the Descendents gear) they were ready in minutes. Still, they took some extra time to kick off, eagerly awaited by the lot (checking times every minute). And in their typical unpretentious style they took the stage, smiled at the audience and gave it a little chatty intro to Suburban Home (and yes, we want to be stereotyped, we want to be classified).

From the first chords on i had the feeling of something slightly more intimate, something more outgoing than the last two shows i saw: Markthalle and Barcelona last year. It may well be the much more cozy location, it may well be the not barricaded stage or it may have just been the fact that we had handshake distance to Stephen and got individually carried away into „this is my very own private show, they play just for me„.

Bill as ever towering behind his giant drumset (i guess he uses the biggest crash cymbals i have ever seen on tour), the smiling Buddha with his headphone. Karl, the only guy i recognize to avoid a plectrum on the bass, holding things together and always looking out for the others. Stephen with his relentlessly shredding of his guitar and constantly throwing faces at the audience. And Milo being the most subtle front man, taking some songs light and on others throwing himself in like nobody else. I guess he takes some lyrics indeed personal!

And funnily they are all my age (MYAGE!) and a still „I don’t wanna grow up“ means as much to them as it means to me (having had the poster on my wall for ages, actually until i got married and moved into a single apartment with me love).

Here is a snippet from @descendentscrew:

And if your eyesight is not impacted by computers, TV’s and mobile phone screens you can see the Hamburg lot at the far end of the stage, dancing away led by our Punk Rock Hamburg Nightingale, a Descendents fan extraordinaire. Sure thing she is also known to the Descendents and as the Hannover lot failed to pick up singing a chorus Milo resorted not only once but twice for her assistance…

Will she wash her hands? Will she be able to sleep back home in sunny Hamburg? I guess she was simply happy as a fuck, though being a Rock Star herself with GERD (a band that fills stadiums rather than small Hannover clubs). As a Rock Star she doesn’t give a damn about her bad reputation and lives out her fandom totally unconstrained. Luckily only one audience member from Hannover recognized her, else it would have been news in the yellow press yet again.

The Descendents played on and on but also somehow rushed through their set (at least it felt so). I lost count of the songs, they also did re-arrange some of the order and at the end surprisingly came back for an encore. Years ago it was alien to all the US bands coming over  but today most of them have adjusted to give something extra once they feel they got some extra appreciation from the audience.

I did not take count but they finished around 23:00, so that’ll be 75 minutes of perfect popular music if you ask me. And indeed the feeling we all had („this was better than Markthalle last year„) seemed echoed from the stage: Whilst the rest of the band was already off stage Bill stood behind his drums and smiled away with a bright and bold smile, two thumbs up. The Hamburg lot did echo this, making it 4.

And also the Hannover crowed did cheer a lot. On top i saw a lot of smiling faces, actually also quite some younger ones. I guess for them it was the first time to be blasted away by the Descendents.

We did not rest long, as we all had to work on Friday. A quick beer, a chat and back into the car. The drive north was nicely empty, so we made it home in less than 2 hours. And thanks to the foresight of our youngster on board we still had cool beer for the drive home.

I think i noted a couple of times that i am not a big friend of away tours when it comes to mu-sick. The Descendents though are worth that cause, period. I guess i will have to make sure every summer to catch them at least once. And i know that i have friends in Hamburg who will happily join in – just puurrrfect! #thereaintnuthinbetterthanlivemusic!