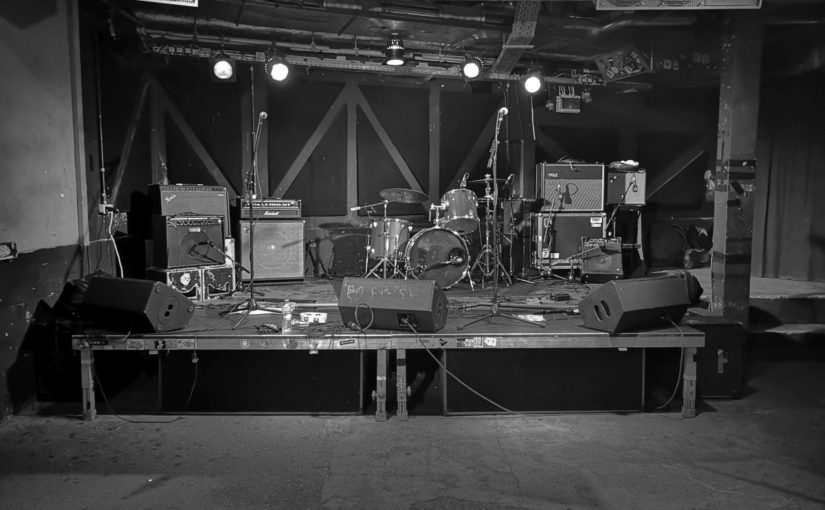 The triumphant return of the Moving Targets last year at the Hafenklang was a wee bit a short show for me, so i was eager this year to get exposed to a full set of blistering guitars and smiling bass players. Whilst i was fully committed, the mu-sick-al connoisseurs of Hamburg did somehow let them down. The parallel Reeperbahn Festival with it’s thousands of shows did suck up audience, at the end i guess a mere 80 people came down to see them.

They where paired with a north eastern package travelling through Europe: Cockbox from sunny Helsingin kaupunki and Rat’s Eyes from dark Mосква crossed their path and thus provided support.

Cockbox had the pain to start early and in front of almost no folks, though they provided quite interesting visuals: A rather heavy drummer with a strange pullover, a silent bass with all the 80 Punk insignia and a small and rather fully styled girl on guitar.

They had some twang but did not offer a compelling proposition. On top the time it took to fix a dislocated string took the energy out of the audience somehow, specifically as the bass player was not really an entertainer that could keep folks away from the bar.

Worst moment was when the girl did an Iggy crawl – that felt just like a poor replay of visuals rather then genuine expression of herself and the mu-sick.  Still, i would give them a 2nd chance in the hope they just had sorta teething problems on stage – their Demo sounds so much better. En koskaan päästäisi suomea alas!

Next Rat’s Eyes from Moscow and they took things into a more serious and slick direction: In your face hardcore with some nice influences from traditional Russian army music (as one in the audience joked).

I definitely did like that more, they also lured more people to the stage including the bass player of the Moving Targets. Their drummer literally did beat up the drum set (and specifically the cymbals), every hit was with full energy and anger – stunning. The guitar looked a bit odd from the look but provided some great shredding.

Check out their releases or just listen into this snippet:

They got the audience to request not only one but two encores, something i hinted to the Moving Targets standing next to me to be the bar that they need to pass and Kenny tongue in check answered that they’ll beat that and will provide us with even more. Plus he would reimburse me personally if i would not love it.

I told Kenny that he could save his cash, i was rather expecting the best. They kicked off quick, without too much fuzz and surprised myself and quite a number of people with energy and … a rather poor sound. There was a lack of balance between back line (bass and drums) and guitar and vocals.

Even when moving around it did not really get better, so i guess it must have been the mix. Over time it gently got better but at least one trusted friend was offended so much that he did leave early.

What was surprising to me was that they nicely speeded up things and even ventured out into 1:13 hardcore like bursts:

Given that the sound was not yet perfect there was some reservation at the start but over time and whilst the sound got better people got more enthusiastic.

And it is anyway fun to see them: Sturdy and heavy drumming, a bass player that smiles away all the time (as he had fallen into a crate of Zaubertrank as a youngster in Augsburg, where he did grow up), jumping up and down full of energy and Kenny providing the swirling guitar plus the distinct vocals.

Once they where done with the set after about an hour they provided the promised extra (with some extra hired in). Their german merch guy was enlisted and with him they set out as a 4 piece doing some covers.

BY now the sound was almost there and the audience did get going. Specifically when they did play “Youth of America” from the Wipers, a song that just lends itself to be covered by Kenny, as it has plenty of that guitar swirl.

I did not count but they did like 4 extras (thus beating the bar) and finished off late (and after midnight) with something special just rehearsed once on the day before.

That was a matching finish, a band that just had great fun playing and getting into it. They audience did cheer them big time but rather quickly left. Some, including myself, got the new record and some of the other vinyl, hopefully that helps them to fuel the van (or repay customer not loving it).

As they are a very accessible band they mingled with the lot after the show and showed genuine interest in how people liked it and to discuss life, music (me mate Thomas and i praised and sicussed Candian punk to the two Canadians) and the world as such. We did not discuss fucking the singer of the Sleaford Mods backstage though at one stage of the talks it was mentioned too in passing by one lovely female attendant (over just another beer).

The Hafenklang had to expel us at almost 02:00 after plenty of beers and i had the fun to stroll uphill to home with the two Canadians, who where up for some food and fun on the Reeperbahn. I left them at the capable hands of a mate for final directions as i had to work on Friday.

I can only urge the Moving Targets to avoid the Reeperbahn festival next year, i trust Hamburg will give them even a wee bit more (and yes i would believe a slightly different pairing would also work better).

In addition check out Kenny Chambers Music, there is a shitload of stunning stuff to explore!

And those options below?

Don’t let them go by – #thereaintnuthinbetterthanlivemusic