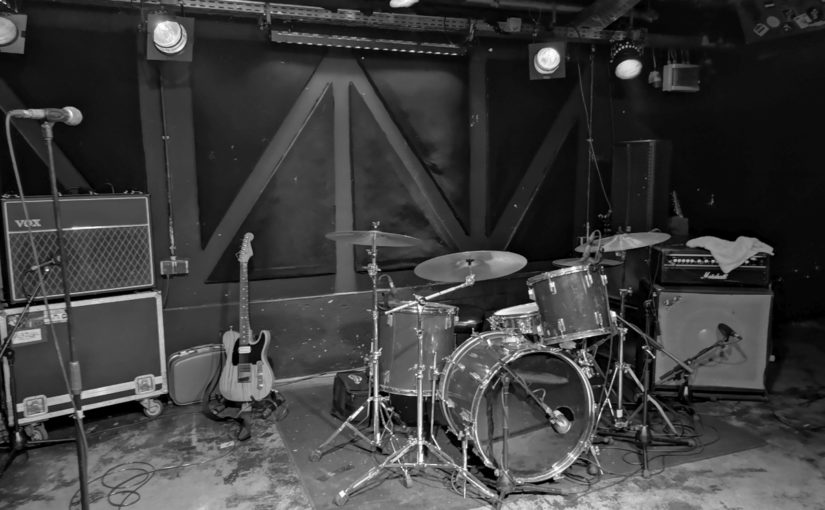 The Moving Targets coming back to Hamburg, sure thing i got my ticket early. Unfortunately my work schedule played some tricks on me and the only trick i could play back was to leave Rotterdamn on Wednesday at 17:00 sharp. But that only ever got me a flight back home dropping into HAM at 21:50 … even under best circumstances that would get me down to the Hafenklang at 22:30 only.

But thanks to me big love i got a lift from the airport, could switch clothes whilst in the car and thanks to the 354 horses under the hood of our Sir Q and me wifes stunt drive abilities i was able to check-in at 22:22 … but only ever to be greeted by the warm guitar sound of the Moving Targets, who already had taken the stage.

But good music requires extra efforts and sometimes hardship. I sneaked into the crowd but was greeted by friends already there with some raised eyebrows and notions of being late. Little did they know about the length of the travel!

The Moving Targets today are Ken Chamber (as ever) paired with two Canadians as far as i understood. Actually a pairing that worked well – all the charm of the mu-sick is still there. Their deep roots into Boston Hardcore sure are wiped off today but them being at par with the likes of Misson of Burma or Hüsker Dü is still the setting.

For me the sounded almost perfect, some hickups (this was the first day of their European Tour) and some slight deviations most likely will go by once they are fully together. What did strike was the smiles both on stage and off stage – i guess 120 devoted people savored them and most of the moved in tune with the music and smiled away.

My bad luck though still came – once i was fully into it the show was over, damn but sure thing my very little private problem. Whilst many left quickly i stayed around for a couple of drinks to wind down and actually had a little chat with Ken and the Drummer – super friendly people and spreading the good news that a new record and another tour is ahead next year.

Then i will make sure i am on time. Promise!