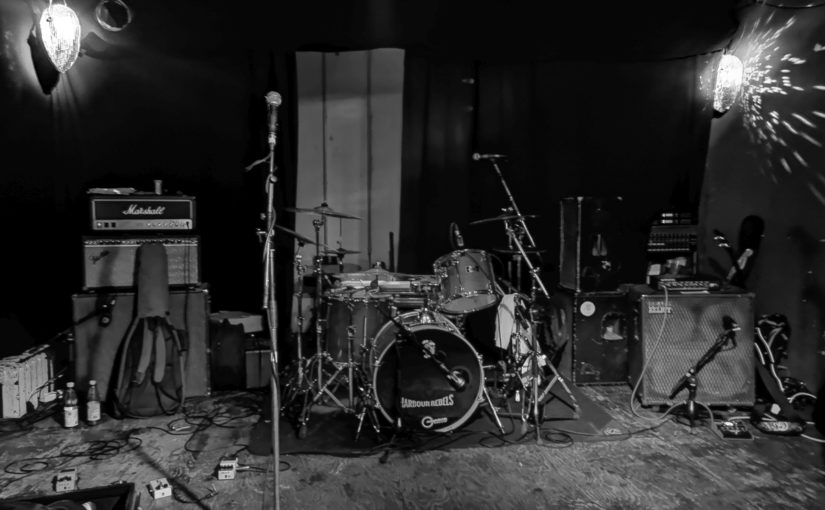 If there was an ultimate proof than it came late in 2018 and it came loud, fast and hard. And it hit me with friends and it hit me ears plus it did send me into a neat hangover. So trust me, #thereaintnuthinbetterthanlivemusic!

First on Brack from the sunny marshes of Oldenburg in Oldenburg, an area very unkindly left aside by us from the big city. They are around for some time but have not graced Hamburg a lot. When they took the stage i feared the worst, specifically due to the bass itself: It was a copy of Paul McCartneys Höfner Violin Bass and thus not necessarily the coolest equipment for a raunchy hardcore band.

Besides the bass Brack turned out to be a neat surprise as they not only sounded great (though the bass sounded just not rock enough – and i mean the bass not the bass play) but also sported something that made them distinct different and very fitting: The singer had a high pitched voice that at times reminded me of Ozzy and at other times of Paul Mahern (of Zero Boys fame).

And he not only got the voice, he also got the guitar play to make it a worthwhile effort and indeed a pleasant surprise (something you only ever will get if you go out and try bands you do not know). Check them out for yerself.

Next Yard Bomb from Wedel (outside of Hamburg city limits just beyond the posh west end of town) and they have been on a quite long hiatus, as they seem to be a fun side project of the musicians, who all now concentrate on different bands (not for a living but for more fun).

At times it had the feeling of an open rehearsal (including a spliff going around and a crate of beer on stage) but mainly it was kick shit US West Coast Hardcore from a Hamburg West Coast band. Some in the audience noted Black Flag or Circle Jerks in awe and they where not too much off.

Oh boy, they got it. They got it big time. A sturdy drummer, a large and solid bass and a frenzy guitar held up high and tight to the body. And an outgoing singer that wants his smoke, his beer and the ability to wander around in the audience. And songs short, hard and fast. No fancy making around, no fancy chorus-bridge-repeat. And it does not take a lot of words to tell the world to just fuck off.

For me a killer set and one of the reasons that i already had more beer than normally during the show. The other one was me mate Rudi who now resides in sunny Perth but for the first time in like 100 years was back to Hamburg during Christmas and Year End – that was a good reason to have another one. And with him his fresh love from sunny Munich, another reason for a beer. And there where more friends and as such you can guess where it all ended.

Back to Yard Bomb – they lack recorded output but just listen to this killer ode to our trusted friend Milhouse that is tongue in check with some of DC’s greatest:

Not convinced? Really? Sorry mate – either you better go up in smoke or have another  beer and try again!

Truly this was the best ever into what some (ok, one) dubbed Hamburgs best live band 2018 and so here is how that outfit kicked off their headlining:

Say hello to The Haermorrhoids, Hamburgs finest Ramonescore band! Whilst the like to stay secretive when portraying themselves …

… they got the message right: You got to check out bands live, as live mu-sick is the best you will ever experience (next to meeting the love of your life). And them Haermorrhoids have been playing a lot recently (up to and including gracing the best punk festival in Europe – Punk Rock Raduno) and they will play even more in 2019.

By now they have a large rooster of songs and they bash them out with all the fun, wit and energy it needs. Want more? Here is some:

And as much as Yard Bomb they know that songs that exceed the 02:00 mark may not be seen as hit material (or are way to long for the attention span of the average audience member).

As such they keep their odes of self reflection short. Like this one:

Any questions left? Any reason not to like them? And they finished off with some additional vocals and dancing on stage and i really need to stand by me mate how sees them 2018 Kings. Yes – quite some time that such a great Ramonescore band came from home town. Well done mates!

The only item missing for now is proper vinyl output that i can add to my collection. Their first recording is out as a tape on La Pochette Surprise Records (go an score it!) but i want damn vinyl! Please! Pretty please me!

The bands had fun and beers …

… and the audience had fun and beers too!

For me it ended nicely loaded thanks to Jana buying high octane spirits for me, Rudi and the Hafenklang bar crew. Good thing that the next entertainment for me was one day away – on Sunday the Razors rightfully expected year end worship, so i had one day of recovery. Still, live mu-sick is the reasoning!