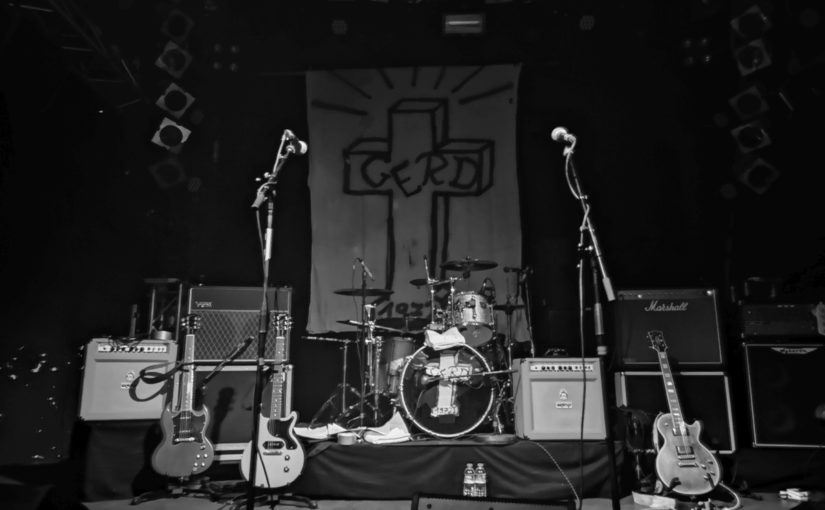 It has been a long time that a seminal Rock Band with decades of stadium touring has descended down on Hamburg – only 2nd class acts like Barclay James Harvest , Electric Light Orchestra or Slayer have come down to Hamburg recently respectively are to come. Within that rooster it was an outstanding achievement by the good people of the Knust to get their hand onto Gerd and somehow trick them into a club show.

The show was not only sold-out in record time (tickets basically where traded under the tables via tell tale) but also was setup with two class mates of Gerd (though of smaller rating): Worldlevel and DEVO made the cut for the most open secret club show of all times.

First on Weltnieveau and thus a seasoned touring engine that has been around Hamburg and lesser towns since 1996 or so. They bring all the rock showman ship that you need, starting with proper stage attire (including all wearing proper white showmanship footwear) down to inviting surprise guests onto the stage.

Weltnivau play fast paced rock with great German words and thus have made a fortune across the German speaking parts of northern Germany. And they have songs that many admire, be it about love, be it about no wanting to go home with her or being about the pure essence of life: BIRTH-SCHOOL-WORK-DEATH is their signature song that got everybody to sing-a-long.

How did it sound and look? See for yourself:

Great stuff, they even managed to throw a Gerd cover in (another Gerd original that went to fame on that island yonder with a band from Scotland called Bay City Rollers). They where the local heroes that the big stars want as support: Quick, efficient and getting some early movement into the packed house.

With some amount of changeover (and some installations on stage) the next star guests from Akron err Herne where to take the stage. They where indeed special guests and long traveled ones too. Their setup was not without hick-ups and the whole show was riddled with things that did not work out in the way it should.

Lights where below perfect, stage layout small and it had all the rock star annotation of the main act being afraid of the support act to steal their fans and put down a much better show. I think Gerd even used some voodoo channeling from their backstage penthouse to bring songs to a spontaneous combustion:

The lot had some high hopes for this but somehow all i spoke to where at least a bit disappointed. They played too many covers (eg. from Gary Newman, Flock of Seagulls) and they bypassed all their early 70s hits. Maybe they get a 2nd chance, a bigger stage and someone who fixes setup and lights. I’d love to see that actually.

And that paved way for the stars, descending down onto the rather small stage of a small club in a small town (at least compared to their more recent stadium tours).

And with all the rock star glamour they kicked in like this:

G.E.R.D. – the song that Lemmy somehow took off them to give it to those brothers in NYC.  And with that they took the lot by storm, from the first mighty chords it was a set piece that would lead to a nice first goal.

And Gerd followed up with song after song from their endless rooster of first class party hits.

Did anything go wrong? Nope! Did any chord sit wrong? Never! Where there technical issues (eg. „too hot for the guitar“ like)? No! They just had all the knobs of the amps to 12 and emitted all the routine of a perfect rock show from the stage.

There where some in the audience that took note of the recent announcement of Spinal Tap getting back together in 2019 and there was somehow an undercurrent of fear that Gerds prime spot could be challenged.

But lets be frank: with that rooster of hits there is nobody in the whole wide world to succeed in a challenge…

Gerd are the simple message that plain simple rock music is not dead, that rock stars can actually descend down into small clubs and that a successful show includes always a medley.

And Gerd have that medley themed after their little home niche in Hamburg – Hamburg Horn:

And with that all barriers where crushed, all borders where open and the floodgates could no longer hold back the fans (from more visits to the bar and more booze).

Without Gerd large parts of the 70 rock circuit just would not have happened.

Without Gerd there would not have been a reason for the punk revolution.

Without Gerd there would be no need to drive back to Hamburg.

And without Gerd, there would be no stiffening.

You, me – we all love Gerd. Try to be part of that universal love!

2 Gedanken zu „… after 27.5 years of stadium tours finally back in Hamburg: Gerd in a Top Of the Pops club show!“