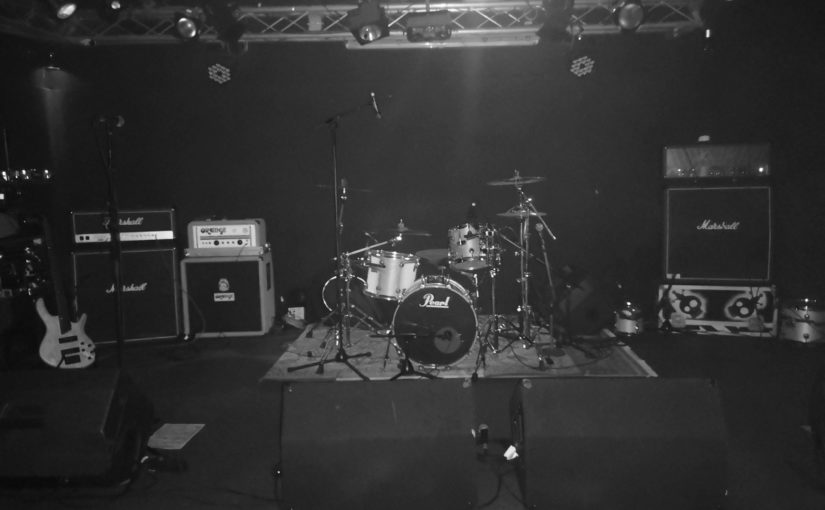 That was supposed to be a worthy entry into a long weekend (thanks to all the German public holidays in May) and it turned out to be so, though it took some stamina to get there. At least the outlook of The Generators taking residence is what is most likely the most fitting club for them in Hamburg was worth the effort to finish up work on time and get into a relaxed weekend mode.

The Monkeys surprised with the support slots: First off it was two bands and second they were of quite, lets say, complementary style. Kick of was with Death By Horse from sunny Sweden.

I did not know what to expect so took my time to listen in. The setting seemed ok, an agile female singer with 3 boys. But from the first song i had an itch, that seemed not to go away. It took some time until i could make out what i did not like and that was the clicking sound of the bass. It did not fit and it sounded too much rock.

They had though one song and one moment that made the whole club listen: It was a really emotional one, presented by Jahna in a very emotional way. And it was about being abused as a little girl. I do not know if it was a personal account but that one did stick (and the audience was taken off foot and afterwards did not dare to applaud – so personal and moving that account was).

Next on RoadRage from fucking nowhere in Limburg. And their sound was initially refreshing – 5 lads with too much hair: Both facial and on their head. They label themselves as „Motor Punk“ (you got to accept that you can learn a new thing every single day) and they pushed forward like a truck.

But soon, too soon actually, it got very boring both for my ears and my eyes. Whilst Death By Horse had something unique (that somehow did not sound good to me) RoadRage sounded so similar to so many bands (and had way too much rock posing). Sorry, not my thingy and like many others (who prefer their hair short) i resorted to the Pub for some more good old Guinness and watching Frankfurt taking Bayern Munich hostage for the German cup (and to see yet another reason to get rid of the video referee).

I was not the only one leaving them early: The drummer of the Generators stood in front of the stage during all of the Death By Horse set and took the same position when RoadRage came one – he also did not stay through the whole set (maybe just because he needed to prep). Nice gesture anyway to see the support bands from near (which i also always try to do, i think any band that endeavors to play a „support slot“ should get some sympathy).

By then it felt a wee bit late but luckily The Generators are a professional touring band so with not too much fuzz they did set themselves up (though Mike had some initial problems with his effect board and the backline … only to realize late that it might be helpful to insert that damn cable into the input jack of the amp). And once they had all things sorted Doug joined them on stage and they kicked off with all the force, all the strength and all the sound that i was missing so far.

It has been only two years ago that they played Hamburg but this time they actually had a full new LP with them, so some part of the set was devoted to actually playing new songs. And them new ones fitted into their rooster just perfect, loads of sing-a-long and loads of grins’n’moves from Mike.

Now i felt in business and also the rest of the Monkeys was in front of the stage and enjoying them. And you could also see that they had fun on the stage, it was the last day of their touring in Germany and they only had one more gig in Copenhagen before they would resort home to L.A..

And whilst it all felt late earlier it was The Generators who made up for time: They did play long and they did add not one, not two but many encores. And then, against all american custom, they came back on stage to do even more. I think they where both in a good mood plus thrilled by the feedback from the Hamburg lot. Here is one of the many attempts of a final encore:

And all of these encore got the crowd going even further, that extra mile that cements the fun emitted down from the stage on the floor in front of the stage. And within that audience one member had utmost fun: Johnny Slash, once bass player for the band, was with them and either was out of his head or just plain boozed: His permanent stage invasions and falling across the monitors did anoy some people though Doug made it clear that there was not yet the need to throw him out. So, to double the fun, we also got him singing. And in the end he just turned out a nice chap with just too much fun and energy that moment …

Stunning, just stunning. And worth a reflection: Since Schleprock scammed Warner out of a million dollars for their 1996 Warner LP that combination of Doug and Mike just works like a treat. I did love them prior to that point and have all the Schleprock output on vinyl but that record to many people was just a surprise 10+ points. And now with The Generators they already have 11 Albums out (and over 20 releases in total) and they remain just and amazing outfit.

And with that knowledge i resorted back to a final pint, some more chats and plundering the merch stall. A very worthy show and i bet ya they will be back at the Monkeys soonest: That little gem fits them like a glove.