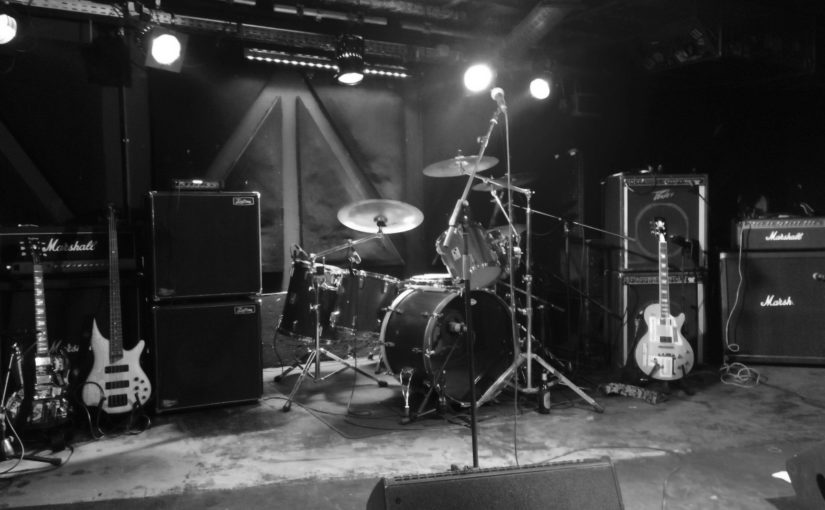 Timothy Smith aka TV Smith (of The Adverts fame) has been around on solo trips for quite a while, lashing our songs with loads of energy paired with an acoustic guitar. For this years visit to Hamburg he paired up with some Spanish friends to back him … once they called themselves Suzi & Los Quattros, for this occasion then went under the moniker The Bored Teenagers, something sure more meaningful.

First on where G31 from Hamburg and they looked like this…

.. and they sounded like … mmhhh … errrr … one of me mates said „Deutschpunk“ and spat it out in a way that his intentions where quite clear. I had an immediate dislike of the optical setting on stage (and yes, i took offence mainly on the one that would look and sound better in a metal band) and i really did not dig their mu-sick.

They had some good moments though they lasted not very long and most of their songs where ruined by what i call complexity. Simple is more, in my humble opinion. But they had fans and got some support as such i did not feel as bad.

And next on TV Smith & The Bored Teenagers and they kicked off like this:

Wow – what a contrast. Both the visuals (TV Smith in white, rest of the band in black and the lights only on TV Smith) and the mu-sick where hand-in-glove and just perfect in delivery. Wow – did not expect that power, that energy and that drive. And what stuns most is that he still has this crystal clear voice that almost pleases yer ears.

And the audience in the well packed Hafenklang went all quiet and all attentive, just like an audience receiving a play in a Theatre. And once the all-time hits came about then audience went from shy appreciation into full time sing-a-long, just like here on one of the greatest ever Adverts songs – The Great British Mistake (a song that you better check the lyrics out, so relevant still today):

And now that hand-in glove thingy got a little rupture. That was too fast paced and actually crushing the simple punk style of the original and in fact crushes the vocals that actually carry the song (and the message). This song in style relies on less speed and more drums Mr. Smith! Remember?

(and that one is too for all those punks who where in love with Gaye Advert, one of the neatest female bass players of all time).

And fast paced it went on, this time in a much more fitting mode getting one of their signature songs across – indeed we where all Bored Teenagers!

And bored triggers another memory from that memory lane leading down to 1977 – The Adverts had a minor success in a German cinematic youth movie called Brennende Langeweile in 1979 (and where seen by Mr. Stickel of Channel Rats fame at the Markthalle in 1978, he’s got footage from the Bravo to proof it!):

It with all these annotations and memories it was a very worthwhile evening with lovely people on stage and in front of the stage, thought it was not really a run down of the first two Adverts records like some people did think it would be. And that is another great reminder: Whilst Crossing the red sea with The Adverts is one of the definite punk records (though 1978 not 1977) the follow up Cast of Thousands remains an industry ruined overproduced something that never gave the band the chance to capitalise on their success.

And that is why TV Smith ended up going solo and playing with everybody and anybody (almost). But he is still able to pen down hit’s, be it for himself or others. So here are his encores – first No Control, a premiere and and a song with a simple but so well fitting message. Listen up youth!

And they ended the rather long set with a song he penned down for Die Toten Hosen – let’s hope that stuff like this helps him to pay the dues and allows him to have some money saved up (so that he won’t fall victim to the NHS if he gets older and weaker).

Did i like it? Oh yes, i liked it. Mr. Smith is a splendid friendly chap and – given he has got an audience out here in Germanistan – well able to converse in German. And his backing band brings the power that nowadays is needed (though they should get some speeding tickets). Some of me mates had a bit more reservations but that was ok. Given that the show was followed by some mu-sick from the platter people stayed on for beer and chats … overall a perfect Friday after a week of being plagued with a cold.

And Suzy & Los Quattro? They did a fucking great job some time back transporting another gem of Crossing the read sea with The Adverts:

And that by all means is another worthy cause and effort!

PS: In case you want more about Mr. Smith then check out this BBC documentary (though you need a VPN via the UK to see the full one hour):

The full video is here!