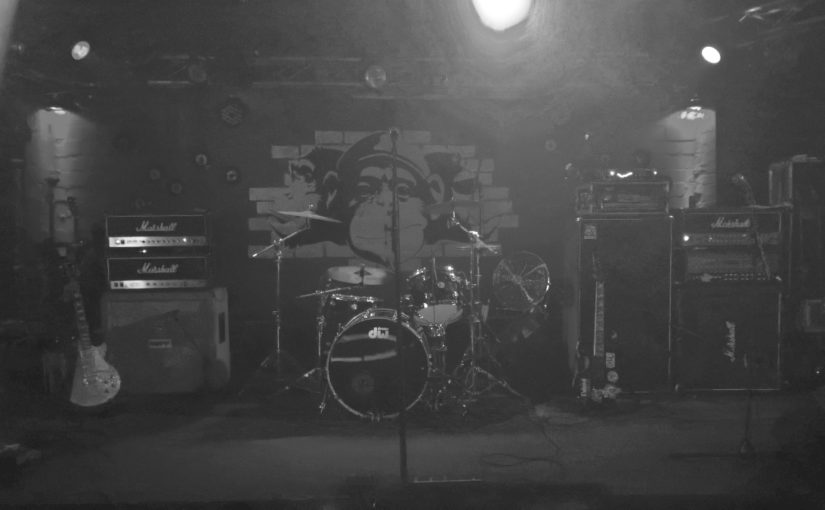 A year ago the Street Dogs had to cancel their European Tour rather short notice, much to the dismay of many folks in Hamburg. So when the 2017 Tour came about there was some scepticism if they really would find their way … and guess what, they did in stunning fashion!

Arrested Denial from Hamburg kicked off the proceedings and for the first three and about songs I thought „oh boy, that’ll be boring„. It took them a good while (at least for my ears) to come together and to ignite something in me old farts brain.

If i had to sum it up in very easy and black and white way i’d say „mu-sick-ally gifted“ and „to good for slow songs“ – once they picked up speed i tended to like them much more. What sure thing is a bonus is the voice (nicely harsh) and that they sing in German.

They got a fair share of support from the audience and by now the Monkeys was well filled. If they go down the route of less complex song writing and structures and keep it at pace i shall check them out much more (and eventually would end up buying a record).

Next on the Street Dogs, who have played Hamburg before but most times in a somehow odd setting: Down at the old Molotov in front of 8 people or out in a small youth centre north of Hamburg in front of some more. They never really got the turnout and the headlining they should deserve.

At for once, this felt different. The Monkeys well filled (though not packed) for a Wednesday evening with some rain and people being in the right mood and eagerly awaiting the Street Dogs. From the first chords you had a tight band and a singer that was on top of everything. Oh boy, what did i miss them!

It was the last show of their European Tour and you could feel that they where happy and wanted it to end on a real high (like Mike trying to use the rig for climbing exercises) – so the audience was very fortunate. And somehow i sensed that with the Monkeys they have hit „home abroad„. That was too echoed by fellow mates in the audience and actually by the band itself down from the stage by single-handedly declaring it „the best club in Deutschland„.

Nevermind a stage lie in the heat of a show but it is indeed so that the little corner that the guys who run the Monkeys have grabbed has become a blossoming beauty. And it hopefully is there to last (and they requires you, you and yes you to fucking go out there and see bands).

With little more than an hour played and an encore it was me mate Frosch who said “ … no more encores, they are from the US“ (and thus giving away his 40 years of show experience) – and was proven dead wrong. Them Street Dogs had so much fun and felt so appreciated that they came back a 3rd time for even more.

And we not only got to the the full body suit of Lenny Lashley (who was admired for his vocals and guitar play by the plenty Darkbuster fans in the audience) but later also Johnny sans his cap (and showing a much better tattoo design on his head than Tim Armstrong – a much better beard he sports too btw).

Oh yes, that was Street Dogs and that was most likely one of the best Street Dogs shows ever in Hamburg (if only we would be able to get them all listed). I did like it, many of the other people in the audience did like it and i think the band liked it too. Now they need to make sure to come back on a regular basis and next time to a fully packed club.

And indeed that was the well deserved applause at the end of the show.

And folks, be assured: No matter how great the records sound at home – the real deal is out there in a club like the Monkeys. And the best: As it was the end of the tour the Street Dogs tried to sell off all the merch they had with them. So i picked up 3 lovely shirts for me love for 10€ each only. A fantastic bargain!

And because it is great re-write fitting the time – here is their 2012 hit single based upon the old Menace standard: