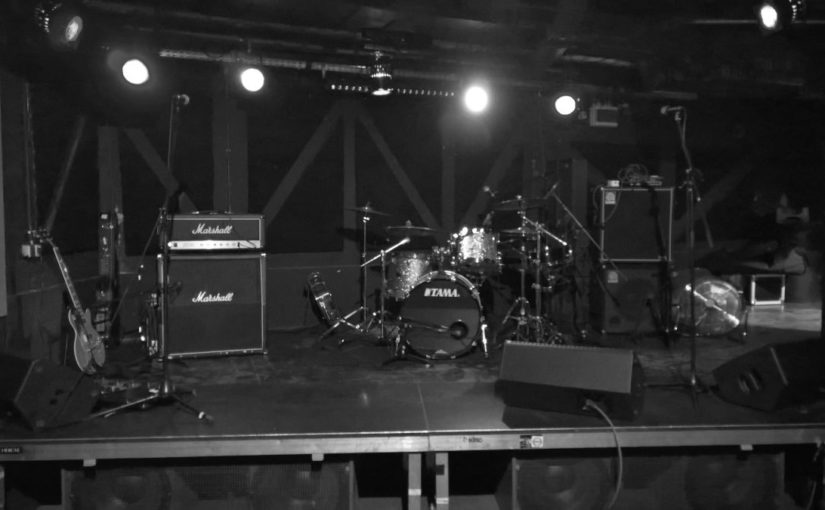 A leisure Sunday, sunny and hot, crowned by Ruts DC returning to the Hafenklang and against all odds a second week of leave @home for me. An almost perfect setting though the expectation was a small turnout: A sunny Sunday on the back of a long weekend ain’t gonna lure people down to the harbour when they face a back to work alarm clock on Monday.

Still about 120 odd people showed up, most of them of age, and gave them Ruts a warm welcome, as always in Hamburg (up to and including some gifts from friendly members of the audience).

There where even some who mentioned „never saw them before“ and for those it must have been quite a surprise as they would get all of the Ruts/RutsDC: The sing-a-long classics from 1979, the Dub-Fusion from the 80s/90s and new stuff just released.

A classic sing-a-long for sure got the crowd moving:

But they mixed their set in a nice way between their distinct different output and given the sunny and warm weekend in Hamburg most of the Reggae/Dub stuff (including the all time classic Jah War) got the crowd into real dancing.

It remains one of my biggest pain points that i missed their January 1980 show at the Markthalle (i was a 15 year old school boy who was not really in control of his agenda yet and short of money) and it remains one of my biggest mysteries why they did not break big and i mean really big – they had it all and they had it all beyond punk. Damn smack!

Here is one more from the later output:

Because it was Hamburg they actually played an extended set, we got to get so much more also because their next date was opening for Die Toten Hosen in a stadium show in Magdeburg, something that only ever get’s them a 30 minute set (but hopefully some dough). So they played on, got the crowed dancing, sweating and drinking and even lured the audience into serving them some beer.

They played an encore and left for good, only to be cheered back onto stage again to end the set with a furious smasher:

Them Ruts: Loved as The Ruts in 1980, safe bets on party hits (Babylons Burning, Staring at the Rude Boys and and and), initial disliked as Ruts DC but soon converted to love their Dub output and today just a great band that is able to draw on a wide range of songs and styles. In within that, i feel back to 1980 when i first heard The Crack and was stunned by the variety of styles on that record.

And for those who want more – go and score the book. Heartbreaking but essential to understand why they did not reach the top. And make sure all Ruts records and all Ruts DC output is in your collection. It is worth it.

Responsible disclosure: I pledged for their book, i pledged for their last LP and 7″ and thus i must have been very biased. And guess what? I feel good about it, it is a worthy cause for musicians who should have made it bigger (and neither fallen early due to smack or later due to the fucking big C).