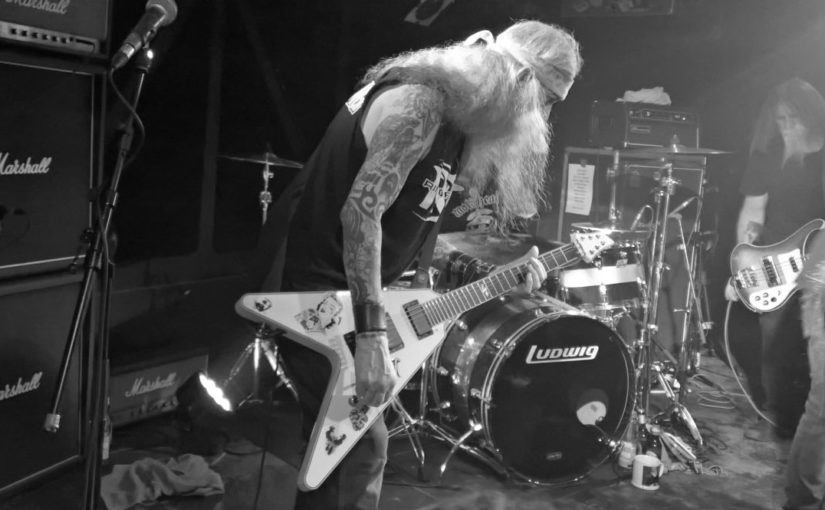 I generally do not like the „heavy“ section in the record bin, though sure Motörhead and some others are not alien to me (spare some time for The Moth from Hamburg if you can). But Saint Vitus, thanks to their SST Records legacy and their affiliation with eg. Black Flag do make sense to me.

And because of that we have a little custom habit with some friends, who are wider than my narrow mu-sick-al ambition, to see every Saint Vitus show in Hamburg. This time round it was at the Hafenklang and sold-out.

And that was strange, as Saint Vitus this time round where lacking Scott „Wino“ Weinrich (still not able to enter Europe since the ill-fated 2014 tour where he was caught with methamphetamine (or, if you prefer some street credibility: Crystal Meth, Meth, Ice or Crystal) at a border). Instead they sported Scott Reagers, who was the original singer during the early years.

We dropped the support band, Tombstones from Oslo, who claimed part of the full house as they are a much loved newcomer (as someone in the know put it). We had a beer and a bite around the corner and when listening to the last 3 songs from Tombstones i found them sounding really bad (and that was more on the account of the sound rather than the mu-sick). They got quite some applause still.

Next on Saint Vitus and … where are the vocals? You could see Scott moving his lips but barely hear the vocals. Also turning the stage monitors towards the audience did not help. Given he entered the stage with a pot of tea i assume his voice was weak or gone – and speaking to him after the show confirmed that.

Because of the missing voice it was somehow an odd one, as the vocals too carry some of the songs and are needed to blend in with the slower parts. But also on the faster songs they where missing, see „White Stallion„:

The good item though was that because Scott Reagers did sing they turned to a set list with a heavy load of early area songs. The bad one was that it was rather short and no bonus was to be expected.

The finished off with an 8-minute version of „Born to late“ that included Dave roaming the audience but i spare you that (as the vocals where not audible) and give you a snippet of „Saint Vitus“ rather:

So, was it worth it? From where i stand it was, Dave and his guitar are just killer assets and the rhythm section (Henry Vasquez on drums and an excellent Pat Bruders (ex-Crowbar) on bass) where perfect counterparts.

That said, to me it was lacking some of the Saint Vitus spirit that is injected when Wino is fronting and it did lack … the vocals being audible (confirmed by other people who roamed the room in search for a position that had it audible).

Lets see how they come back next time round – they still have credit with us!