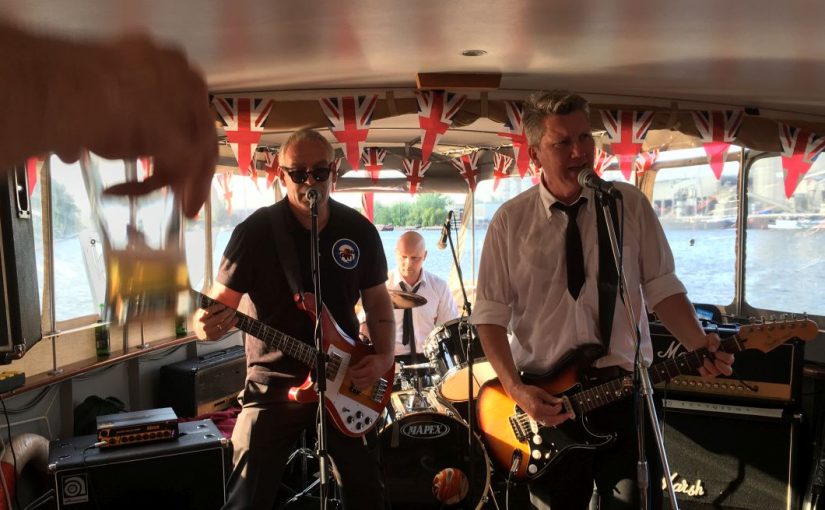 Me Mate Frosch reports from the Berlin away game of Jam Today:

My wife and I had to decide early on at the end of last year if we were going to take a trip to Berlin 1st weekend of May to watch our friends from Jam Today joining the Sex Pistols Experience on a boat trip on the river Spree in Berlin. And guess what? We took the challenge!

So we found ourselves standing at a pier in Berlin on a hot and sunny Sunday afternoon greeting Jam Today along with Johnny Rotter, Kid Vicious, Paul Crook and Steve Clones arriving back from their 1st sold out tour that day.

The little cruise ship “MS STRALAU” has space for up to 200 people but only 100 tickets were sold each trip. So it was pretty spacious and relaxed, no hassle at all to get a few drinks to start with. We had a quick chat with our friends in Jam Today before they already had to take the stage again.

It was their first proper show with a new drummer and latest after a couple of songs when they kicked into smash hits like “In The City”, “Down In The Tube Station At Midnight” or “A Town Called Malice” the party was on its way and a good part of the audience had fun and danced.

It would never match Jam Today’s boat trip in Hamburg on the river Elbe almost 7 years ago though – it is just different when there’s all friends and old companions in the audience eg. a home game… By all means try to get tickets and come to Hamburg if they are ever planning to do a trip on the “MS HEDI” again!

Just from peoples outfit it was crystal clear that most of them where here to see the infamous Sex Pistols Experience (SPE). Old School Punks, 40 and above, wherever you looked, but also some younger ones, including a perfect copy of Soo Catwoman – nice outfit!

The SPE made a start into their show and graced the little “stage” at the end of the boat with their perfect Sex Pistols looks. Since seeing them in Hamburg for the 1st time a couple years back I’m deeply impressed by their show. Having just missed the Sex Pistols in Hamburg January 1978 as they broke up little more than a week before, it was the closest and best thing to seeing them at the time.

Still honouring “Never Mind The Bollocks” as the best and most important album of all time I would have never wanted to see the “real” Sex Pistols when they reunited (that proved seeing John Lydon with PIL playing a horrible and extremely boring show some days later in Hamburg…).

I rather watch the SPE and as Steve Jones apparently put it: “They really are the Sex Pistols – superb”.

Half way into the set and the floor of the boat was soaked with beer and people started slipping and crashing to the floor like flies. What a great and wild show, the best I have seen the SPE play yet.

I had my moment when I pointed at Johnny Rotter during “Problems” and screamed that the “problem was him”. So he started pointing at everyone else, good fun and all around great guys in the band. And as usual it was “No Fun” that had to end a fantastic set and a terrific afternoon on the river Spree.

Looking forward to see the SPE at Blackpool Rebellion this year, thanks to Mario Irrek for setting this event up and Andi Incognito for the tickets – ‘til next time!

Thanks for that story Frosch and to Natali for pics and videos! And great to see Jam Today thrive in Berlin …

One thought on “… taking a cruise in Berlin with the Sex Pistols and The Jam – What an EXPERIENCE!”