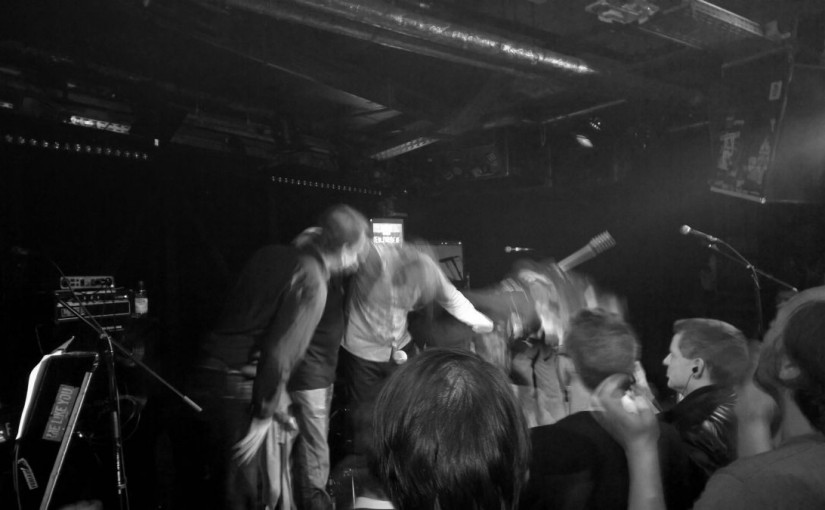 That was a bid off & an odd one, as it was not my mu-sickal standard setting but a huge way back to something that was important when i was a 16 year old teenager discovering what in Hamburg was coined „Neue Musik“ (and that was all sorts of punk, new wave, industrial and what have you stuff).

But all of that was void as earlier that week news came around that a fellow mate did meet fate and just by sheer luck was still with us (but in hospital and awaiting a pacemaker for his heart (which choose to no longer function as designed and desired)).

First on where Black Heino from Berlin, who dub themselves as „Post Punk“ and „Hamburger Schule“ and for me meant nothing – this is just not my type of music and way too intellectualized (if that word exists). They even killed one of The Who’s worst efforts – the 1965 hit „The Kids are alright“ which is a Beatlesque effort from where i sit was killed with a 12 string guitar (in itself something i dislike). Never mind – i am not here to judge them…

Next on Fehlfarben with that oldpunk Peter Hein (aka Janie J Jones), who can claim a long history in music, going all the way back to Charlys Girls (1977), Mittagspause (1978), Fehlfarben (1980) and Family 5 (1981) and a constantly evolving style. And no lasting mainstream success, something he anyway was never found off i take.

Fehlfarben in 1980 made a big impression on me, something different than pogo punk and something new (as in German). They folded quickly but where key instigators of what ended up as „Neue Deutsche Welle“ and was only ever a nuisance.

They still have on and off records, quite unique pieces of pop muzak with extremely intelligent German words or better rants by Peter. Also on the rooster is another household name from my youth – i always liked „Der Plan“ from Düsseldorf for both their simplistic electronic muzak but also for their incredible great cover and stage design – and that is Kurt Dahlke aka Pyrolator, who provides some of the throb-throb bubble in the backdrop.

So what was it like to see a name and a face from the past? Luckily they did not play their massive hits in a 1980 fashion but did stick to a 2015 style. It may have taken some people off in the packed Hafenklang but i believe this is the only way to do it if you want to maintain credibility for the stuff you are doing.

And whilst the rest of the band did stay „shut“ Peter entertained the audience big time and sometimes even falling back into local Düsseldorf slang. They played quite long (1 1/2 hours i bet) and they finished off their 3rd (or was it the 5th?) encore in style i’d say!

And me mate? Was not only on my mind but also on several other peoples mind – we all where quite shocked and considered him to be ultra lucky. Some already payed a visit to hospital, some will do later. But one will carry a small gift with some choice words from Peter Hein on the front cover. Get well mate, the world without you would be so much darker!