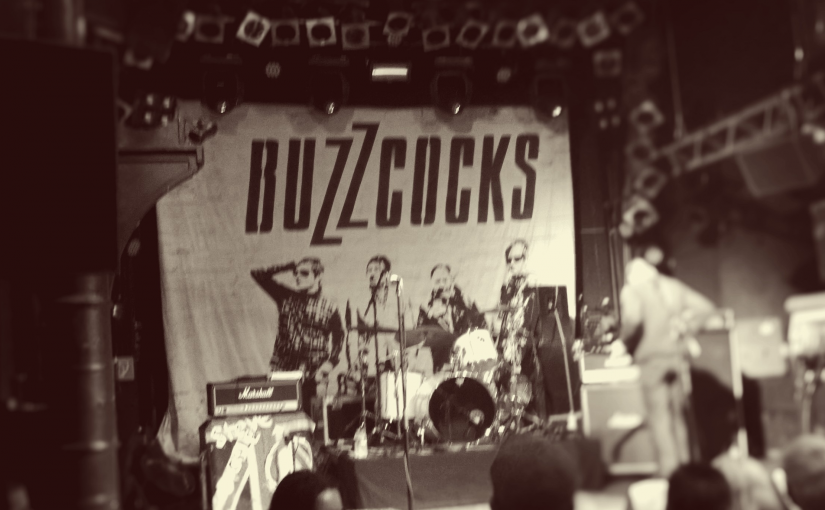 11th of March 1979: The Buzzcocks graced Hamburg for the first time. And this year both remaining original members Steve Diggle and Pete Shelley will celebrate their 60th birthday so there was no doubt that the Hamburg Oldpunks would be there to give them a hats off in 2015, 36 years later!

The support stint was for the ultra cool and retro Cyanide Pills from Leeds and the Buzzcocks confirmed stardom rumors (“…Champagne mandatory“) by pushing them and their gear to the front and by limiting their stage time. Odd. But the Pills made the best of the small space that was left. It did though take away some of the energy and moves on stage and that transpired through on the music. I liked them, they where tight, cool moves and cool non-punk white leather jackets. Class!

Next on the Buzzcocks. Almost 40 years in existence. And still going strong.

They kicked off with Boredom and i had some doubts if this was really going to be quality time – the sound was not really good and they where not together. I do not think that they practiced allot prior to their tour kicking off in Hamburg. But from then on it went better, sound was tuned and they got into it.

Fun was that though the average age of the audience was near 49 there where still some younger people in the audience, predominantly female. And even a full family was there and the daughter (i’d say 16 by age) was dressed in a Buzzcocks T-shirt and did sing all old songs, i guessed influenced by their parents. Good parenting by the way!

Somehow the packed (and sold out) show had an icehockey setting: First 20 mins old songs and slowly getting into it, 2nd 20 mins new songs and the audience cooling down (but the band gettin’ tighter and tighter) and then the final 3rd 20 mins with all these songs that can only be described as timeless beauties. And by now the band was at it, played even hidden gems like Autonomy and Harmony in my head (and in that one Steve Diggle managed the audience like it was his private army, which indeed it was).

A short sip on Steve’s stage bottle of Champagne (mandatory perk) and off they where after 60 mins plus 3 songs encore. What did stick? Pete’s beard and belly. Steve’s Army and that he looked sober. And the backline (drum’n’bass) that was lacking some of the groove that should be injected into the timeless beauties that are indeed the Buzzocks love songs.

But finishing early is most likely an age thing and thus i was home early (where me sick wife needed to let go the show).

Still, quality time indeed. So hats off to both bands!