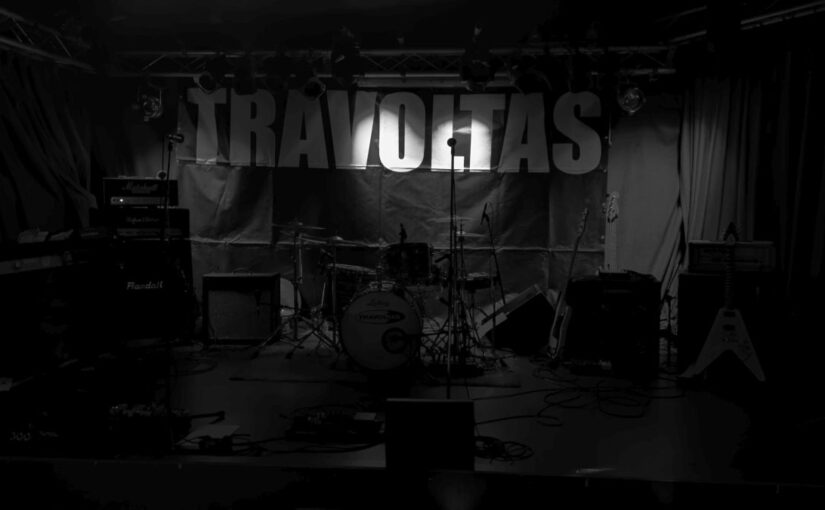 Hamburg not only has the Rebellion Pilgrims but also the Punk Rock Raduno Pellegrini. And whilst good old Charlie Harper (meanwhile at a whopping age of 78) would go on to play for the Rebellion lot on Saturday at the Fabrik the weekend started actually with a double feature for the Raduno lot:

On Friday it was Randells (Sweden) and Travoltas (Dutchistan) at the Monkeys and on Saturday it would be the Puke Fest in Münster. And not only Hamburgs local heroes The Haermorrhoids would be there, also a number of those attending at the Monkeys (and a few more) would take the train down to Münster.

Kick off was with the Randells from sunny Blekinge County in Sweden and they set the scene tongue-in-check with a sing-a-long that i guess everybody in Germany can sing to (at least in my g-g-g-generation):

And here is the original, in best Beat Club Fashion:

And whilst at it, there is sure a German cover:

With such a setting them Randells already have won me over, even more upon realizing that they adhere to one of my favorite ground rules: Matching and/or orchestrated stage attire!

Like many others from Sweden who play in the oddly dubbed Pop Punk genre (and remember, the “Pop” in Pop-Mu-Sick stands for “Popular”) they throw in a healthy dose of America, Beach, Sun and Surf. Which yet again on my side at least makes click for the last three.

Their stage presentation was very structured, three songs, little break, next three songs. Between the songs just a few word to the audience, they where not really chatty.

And this is how it sounded, this is Cheese from their 2012 effort:

I liked them and the longer they played the more they won over the audience, as their songs are rather on the clever than simple side. They also seemed to build more confidence on stage and at at the end really had a big share of applause.

I would suggest you check them out, just go here! And, frank, sporting a Flying V Guitar out of genre wins me over at any time, anyway!

Next on my longest wait as i never had a chance to see them before, so this forever was my mental intro (hum away):

Responsible disclosure: I am a Travoltas devotee ever since this song was song #1 on my Playlist #1 (done back in 2000).

Their set list was immediately inspected by those in the know and positively comment with respect to the wide mix the songs originate from.

So this is how they kicked-off, One For The Road from Endless Summer (2002):

Bang – all the ingredients i was yearning for: Speed variations, harmony bridges, vocal bridges, choruses. Plus energy. Plus positive vibes. Yippieeeee!

It sure ain’t a surprise that as a consequence their songs are considerably longer than the normal Pop Punk stuff, just looking at the stuff of them i have on file it is on average 3:31 (and all of the other stuff in the genre hoovers around the 2:20 mark).

With 6 people on stage they almost exceeded the capacity of the Monkeys stage but that is what creates their unique and wide sound: Keyboard, two guitars, bass, drums and the singer (with a very wide vocal reach).

It is a clever and damn simple recipe in the end, normally put to simple words as “… an energetic mix of the Beach Boys and Ramones with a dash of The Cars“. And to be frank, this is straight down my road:

Whenever i get mellow and the harsh sounds from H/C and Oi! need some offset it is this little niche of sugar coated harmonies that makes me smile, happy and sing-a-long. But it does need some Ramonescore under the belt, else it is too much sugar to swallow.

They played quite long, got loads of cheers and towards the end topped it with an endless barrage of hits:

First a cover of Major Tom (a true timeless beauty hat has also been flawlessly covered by Face To Face), then followed by Pray For Sun from their glorious Teenbeat album (all the way from 2000):

Little secret: That chorus always cheers me up and is in my mind when i stroll Danish beaches with the love of me life…

Next Waimea from Baja California (1997) only to return to another glorious sing-a-long from Teenbeat, that actually should have made it gold with any Radio Station serving a coastal area with sunny beaches:

Sing-a-long to that great chorus (that is also forever tied to my favorite shoreline on Jammerbugten):

And those two songs in an ever better setting, live at Punk Rock Raduno (the best little festival in the world), all the way back in 2017. And rumors have it that this year the Punk Rock Raduno Pellegrini might have it yet again:

It was a pity that the turnout at the Monkeys was more small then medium (and sure not sold out) but all present in front of the stage by this time had a smile (or a broad smile) and where moving. Those who knew them sang along, those who did not where positively surprised.

At the end plenty of cheers, plenty of applause and a two song encore. As far as i was concerned i was flat out happy, as far as my friends heading for Puke Fest where concerned they where looking forward for yet another dose of the Travoltas.

And those who where at Puke Fest came back with even bigger praise about a complete tear down of the sold out place:

Thanks to me mate Frosch for the summary and Kai Uwe and Kati for the pictures.

It is worth to note that since the Travoltas re-united they also face “long distance friendship” as their singer now resides in sunny Stockholm and runs a studio. Those interested in a wider mu-sick-al context might want to listen in:

In sum a great night that should have deserved more people in front of the stage and from where i stand a cemented love between Punk Rock Hamburg and the Travoltas (as visible on the tiles of the Monkeys loo).

My dream date anyway would still be: Giant Eagles, The Shivvies, The Windowsill and Travoltas as a Dutch Package, during Summer on the Hamburg harbor front or on a boat cruising the harbor. Can i dream? Anybody willing to make dreams come true?