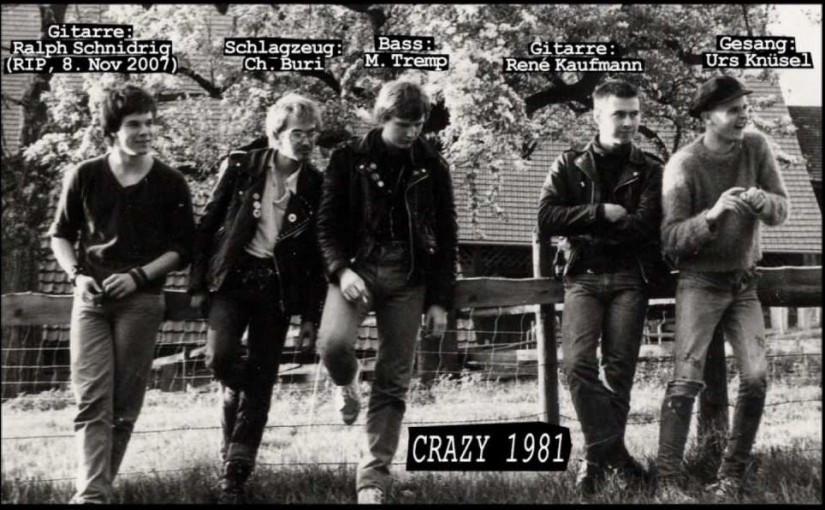 Hamburg was obsessed with Swiss punk, no sursprise that plenty of records made their way to Hamburg and some records got either re-released (like Crazy’s 1980 LP „No Chance“ was put out for Germany by Tom Meyer’s Moderne Music Lable) or even soley released. Also plenty of personal contacts between people from Hamburg and punks mainly from Zurich.

Crazy where not „first generation punks“, started in 1979 but made it to THE key event in Swiss Punk history: „Swiss Punk Now!“ in Nov 1979 in Emmen and burned quickly – just after finishing their 12″ EP they called it a day after feeling that hardcore punk was no longer them. But they made a clear stand, mixing high energy hardcore punk with outspoken vocals.

The verdict:
1977 – yes, yes, yes – early Swiss Punk definitly was 1977!
published by a cool lable – self produced, self issued, self marketed – that is DIY Punk!
found in a cool shop – Konneckschen, where else?
catching sound – Yes, back then so much better than german bands! Great driving chorus underpinned by pressing drums!
The lyrics – one of the biggest assets of Crazy, also not shy to theme homosexuality or eg. the death of punk as such!

The lyrics are in German (with a play of words on „Rechtsstaat“ (state of law) and „Rechts Staat“ (right(wing) state)) – so you need a translation, mate:

For my english friends it roughly translates to:

Make sure you crank up your audio:

See some rare live footage on one of their own DIY videos rescued through times:

When i was a young punk in 1981 this stage pic from Crazy burned itself into my brain as „that’s where i want to be“ (and susequently i tried to play bass but failed):