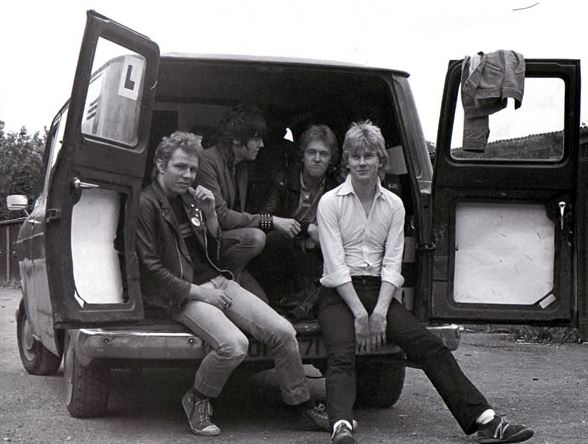 Rudi…long lost, long forgotten i dare to say! To me the forefathers of all bands that aimed to integrate Pop and Punk and that tried to mix eg. Beach Boys vocals with Punk (Travoltas, Windowsills and others). They where great, they where up against time and they lost it all due to … who’s fault was it anyway? Formed in pre-Punk Belfast in 1975 (if you want to list to the full account, go here – a Radio show about the history of Belfast punk) they quickly singned to the local Punk lable „Good Vibrations“ and later went down to London, where it was all … already over.

When Good Vibrations missed to put their signature Song „The Pressures On“ into 7″ vinyl (only released as bootleg in the 1990’s) and their fame with Paul Weller’s Jamming! Records took a death toll when Jam disbanded in 1982 they simply gave up!

1977 – naa, but a pure pop punk gem!
published by a cool lable – Ok, back then a rock star (Paul Weller of Jam) running his own lable for small bands was realy cool!
found in a cool shop – yes, sure – Konnekschen again (and again and again)
catching sound – great guitar taking vocal like leads, catching breaks, a splendid bridge towards the end and lovely altering of vocals style – a real sweet gem! With a better production it could have been a real hit! No, it is already, but could have made charts!
The lyrics – dark, tearfull and somewhat out of time (back then)

Listen to the 7″ version – a different version was mixed for the Rodney on the ROQ 3 Compilation:

And their signature song, here live and announcing the Good Vibrations 7″ that never arrived – „Hit or Miss?“ – sure Hit:

The lads folded and went on to play in many ventures. Brian Young (Rudi 6-string man) comments on Crimson:

„Ronnie, Grimmy and I wrote it when we were still a 3 piece and the riff and intro were originally part of a song called ‚Murder on The Second Floor‘ which never quite came off.. A few months later as if by magic we’d kicked it into shape and Crimson was born..!

Unlike most bands we did write our songs together..words and music..it just worked better that way.. We used to get slagged for writing ‚obscure‘ lyrics – well they weren’t obscure to us – but we hated the dumb sloganeering that was so prevalent at the time (and we’d done some ourselves when we were starting out..!)..so we let people figure it our for themselves..

Crimson, like a lot of our later songs was political – but with a small ‚p’…not silly party political crap but I suppose what people would call personal politics..though we never sat down and figured that out!

Idiot English journalists used to criticize us and the Undertones for not writing about the situation here – we always did but we avoided all the dumb clichés so I guess they missed the point..as if we cared! Anyways the way we put it was that we couldn’t have written the songs we did living anywhere else but Belfast…

Crimson was our quirky way of saying that if you wanna do something with your life, or change your life or whatever, that it was up to you to do it..and that no one else would do it for ya..but that there was always hope..even when it looked impossible…we where kinda optimistic back then!“