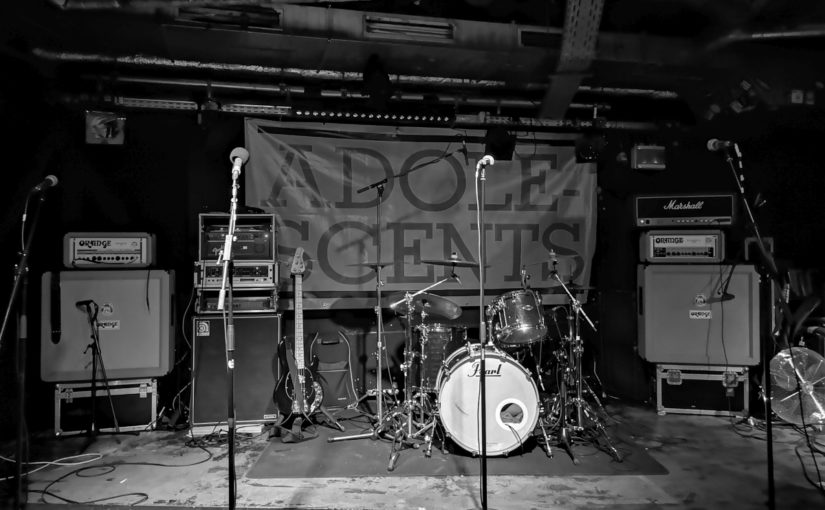 This was going to be a brilliant Friday night: Not only was i still on a high from the BossTones show on Tuesday but it was the Adolescents again (and ever since last years „For Steve“ show i would make any effort to see them) and a little not so well kept secret appearance of a band from … Brighton. As in United Kingdom. From that Island yonder. A band that loves Hamburg. And is loved over here.

First on and with a slightly shortened set due to the extra addition was Punktucke, the unfortunate locals. I guess they where not too happy with this but as ever had to bite that bullet. They had not more than a 1/3 filled Hafenklang in front of them but they just did not care…

A very precise and to the point set, for me deeply tied into a sound that also other bands from Hamburg do feature but with a fresh spin. They are not particularly my favorites but they got something meaningful to say, both on the mu-sick-al and lyric front.

Next on Fights & Fires from the UK. I saw them last year as support for Dag Nasty in Bremen and noted „The mu-sick to me was exactly that type of music that can’t choose what it wants to be„. This time they sported a wee bit less hair but they still came across to me as „no fish no meat„.

Others in the audience liked them from the start, got dancing and flying (and some of those even where on the guest list, so they do have local support). One of me friends was even so convinced that after the show he took home their record. They where friendly, they where hard and they where fast. Nothing wrong, just not my sound.

And that gave way to the Adolescents and they kicked in like this:

In front of the stage the sound was almost ok but somehow on stage the musicians did struggle. It took a couple of songs, some stops, some interactions with Witte (who did sound) and the removal of a mike in the kick-drum to get the stage sound acceptable for the band. And frank, also in front of the stage it sounded better.

They got a lengthy set list prepared and they pushed forward almost relentlessly. They definitely where not going to take any prisoners this evening and they knew that someone else would mop the ground with the audience to finish off – so they did let go!

They also traded some memories, like towards Jürgen Bitzcore (who to my surprise was in attendance) and a song long ago played for the first time in Hamburg. And they had people relentlessly dancing and singing along – to the known hits and also to the lesser known songs.

If there is one item that stood out for me then it is how tight, how fast and how energetic they where. It was thoroughly a killer set of you ask me and they never did hold back.

It was sure thing not possible to top last years show from a feelings perspective, the love & appreciation vibes last year where to heavy. But this night they topped it from a mu-sick-al perspective. Just puuuurfect!

You can see it from the many picture, loads of broad smiles and loads of fun on and off stage. And that forever makes a good gig, that simple recipe!

Whilst the Adolescents resorted from stage around midnight there was still one more fun item to enjoy: The Bar Stool Preachers had a day off in their schedule and needed a place to sleep. Hence they booked themselves into Hotel Hafenklang for a few hours and payed with some stage time.

That sunny lads from Brighton, who had all fun during the other bands, took the stage like this (in self made and highly stylish gaffa makeup):

From the first chord two items where clear: Compared to Tuesday as support for the BossTones on the big stage of the Freiheit they injected some nitro and supercharged the engine in what felt they were trying to match them Adolescents in speed.

Maybe the just did let go? I definitely like this raunchy & speedy version of the Preachers more and it sure fitted the location and the evening so much more. And raunchy and speedy it was also with bodies flying left right & center, up to and including crashing into me mates beer.

Someone should have pressed that big red „STOP“ buzzer – you can’t hurt a beer glas, that is very very unfair! But the mood was fun on a Friday night out so nobody was prosecuted and me mate simply strolled back to the bar: Knock it back and ‚ave another one!

In record breaking time the Preachers did drive full speed ahead through their set, always at the risk of speeding. Outside they would have been fined, inside they just got love, showers of love.

They finished their set off at around 01:00 (against a 02:00 curfew backstage) and if i am not mistaken their alarm clock was set to 05:00 as they had a long drive on Saturday in front of them. Still, they put everything in and they got they audience still going – see yerself:

I was thoroughly done after a long day and took the gentle uphill stroll home through a peaceful and quiet city with almost no traffic. Just over at the docks, some folks still did the good old hammer work.

The Adolescents had it a wee bit easier, their last date on this EU Tour was Berlin on Saturday and then back home. In this form they can come back every year (and every year i will put a little memory in … For Steve!).