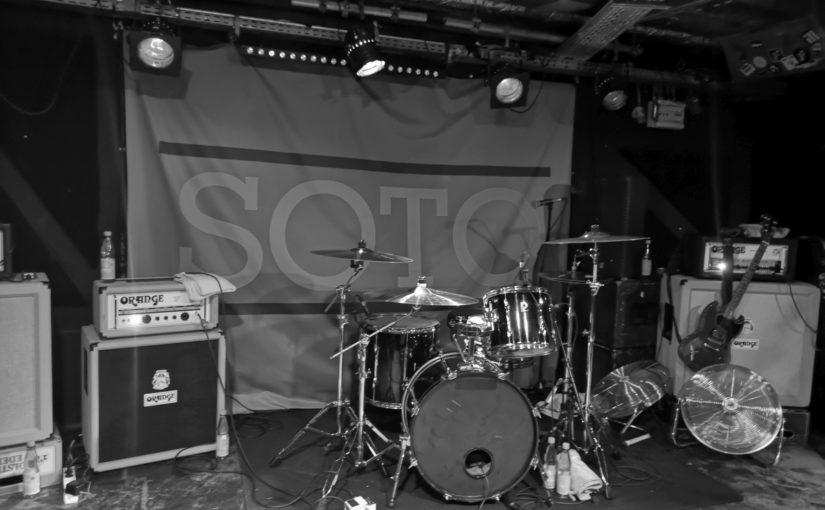 Although i know that our little scene is actually very close, very tight and generally full of mutual appreciation there are these little moments, these little gestures and these observations that do stun me. Tuesday evening at the Hafenklang was such a moment: What under normal conditions would have drawn say 100+ people to see the Adolescents turned out into an almost sold out show that the Hamburg lot come out for and provided the band with a huge wave of love and appreciation.

When the sad news of Steve passing away came over many people thought „…that’s the end of the Adolescents, they will cancel the tour“ and quite right so. We (and i) have lost members of our little scene in the past and not so recent past and it is a devastating feel. And now think of a band that just finished a new record, booked flights to Europe and all of that was managed by … Steve. It takes a lot of guts to then just hang in and come over. You could feel that the band was in two minds: The heavy push down by the sad loss and the uplift from the love coming back from the audience.

And whilst you should never reveal the end of the book at the start i think „For Steve!“ is a good reason to let you know that the Adolescents came out of that amazing: They gave most likely the best, tightest and heart-full set ever in Hamburg: For Steve!

The support slot was taken by No Sugar who sported some familiar faces. It was their 3rd only gig but individually they have some experience under their belt. They claim to do Proto-Post-Punk/Anarcho-Rock’n’Roll and that makes me smile, as i can now add another drawer to my mu-sick-al cupboard.

When they played i could actually not make out any connections to the cupboards mentioned, it think they play something with a good twang and have a special advantage by all of the three in front singing. Either individually, or in harmony or with some as chorus. Whilst i could not make out all lyrics (in English) it was their main asset.

Did i like them? Yes – i stayed inside during their set whilst half of the audience decided to have beer, sun and conversations outside of the Hafenklang. Their set was short (say 25 minutes) and only had one disadvantage for my ears: There was little rhythm change, little variations in speed. Whilst that per se is not an issue, i think their type of twang would work better with. Lets see where they head for and lets see how it works should i see them again.

And then came the Adolescents and they were greeted with loads of applause and loads of cheers. And they kicked in like this:

Bang, spot on. And sorry for cutting the cheers off at the of the video – there where many. It was clear that for them doing this was a heavy task, the heaviest most likely for Tony (who lost a life long friend) and for Brad (from F-Minus, Leftover Cräck and Rats in the Wall), who had to fill in on Bass.

And whilst they blitzed, bulldozed and stormed through their set they also took the time to remember Steve and let the audience know how much they appreciate the support and expressions of love. It was truly a show fueled by love and positive energy and it made everybody feel good.

As stated earlier i think it was the tightest and most energetic set of the Adolescents ever in Hamburg. The longer the set went, the the way above 200 people in the audience got moving and enjoying. And i think also the band on stage really enjoyed it.

And when it came to the end there sure were encores and the final encore was an obvious one:

Thank you so much Adolescents! That was a worthy remembering of Steve’s legacy and that was a great show. Hard things may hit us and hard thinks will eventually hit us – it is how you go about it. You went about it in the best possible way and for that we are thankful.

And with all that love and joy most of the audience set off to plunder the merch table, many got the new record and a shirt – one loner got the first record and subsequently was taunted by one of me mates (for no good reason). I got the new record and the „Free Melania“ T-Shirt and when i turned around 5 of me mates had done the same choice, so we decided to co-ordinate wearing it for one show in the future to appear as a gang.

I was home very late (and nicely hung over on work next day) but for a very worthy cause.

nb: And here is how the Adolescents phrase it: