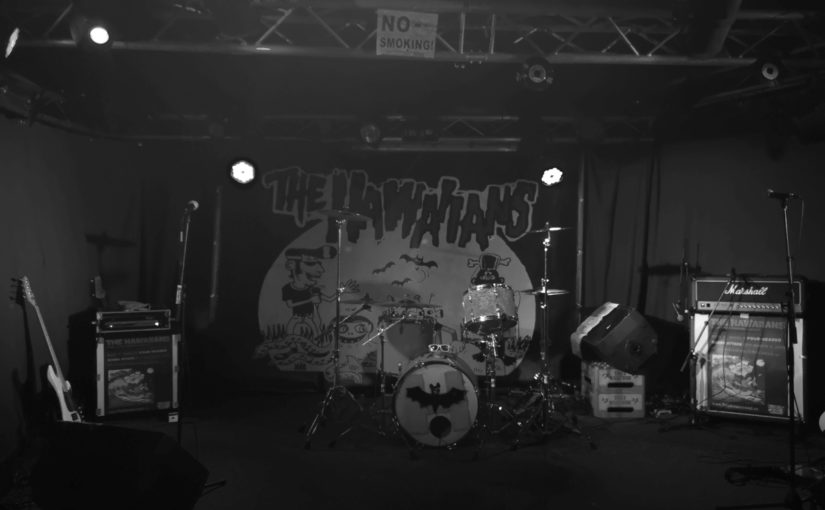 Only 4 years? For many the Monkeys is like a 2nd home and for many it feels like the club has been around „forever“. True is that it opened doors in February 2015 (with an „inoffical“ show and a fun wrong print on the hardticket) and thus indeed it was time for the 4th birthday.

The rooster was diverse (and unpretentious) as the club itself. Kick off was with some bubblegum ramonescore from Westerkappeln (a town with indeed a funny name). Three guys, three Hawaii shirts and three sunglasses – and off it took.

What is surprising is that the drummer plays standing but in the back. It looks different and i have to admit that this was a bit the tricky part: If you play drums standing and provide key vocals then you got to be on the spot, in time and in sync. Unfortunately sometimes it did not feel that way but listen for yerself:

That said i did like their bubblegum sound, their stage attire (always important to me) and their short set. At the height of that they actually managed to get some Travoltas-like multi voice choruses going, something that i damn like!

And with a swift makeover of the stage it was time for a world premiere: For quite some time some of the Hamburg lot come together in the Monkeys to sing together. What at first was dubbed as Monkeys Choir now is called Hamburg City Punkrock Singers and is a 20+ folks venture.

At first it felt funny, as in front of the stage it was a wee bit empty and that feeling was odd: Those normally standing next to me to see bands all stood up there on stage! Next to vocals they also had Hauke on a guitar to provide a bit of rhythm and by that means hold the voices together (though sometimes being too loud and too off).

Did it work? I have to admit that it worked only partially but as they are into it very fresh there is ample time and space for improvement. On some songs it went remarkably well, specifically when the song did lend itself to vocalization (and some challenge response singing was added).

On other damn simply the full frontal singing may work eg. in a football stadium but it ain’t in the choir setting on stage. But full credit for their effort and indeed i look forward how that venture evolves as the idea is a great idea!

Next chance to see them is open air on the Jolly Roger stage of the Hafengeburtstag – don’t miss it!

And once the choir had finished it was time for some surprise for Sam and Ralf: Instigated by Arne some of the regulars did collect some funds for the club to allow them to address needs outside the regular investment schedule. With some loud cheers they where handed over (only to be proposed by Ralf to be spend on a pub crawl with all the bar, stage and sound hands of the Monkeys).

Next on the eagerly awaited lottery – the big prize of a Golden Ticket (with 365 days of free entry to shows) was to be drawn (and the lottery tickets sold provided 525€ for a local charity. After some fun about the minor wins the Golden Ticket found home with a regular – well done!

In the aftermath of that lottery Sam announced 15 minutes of free beer for everyone and thus lured all of the audience to the bar and into the pub. And whilst everybody rushed to drink Faz Waltz took the stage and started to play – obviously nobody told them to hold back a wee bit until everybody was satisfied with beer.

But luckily their stone cold glam rock finally did lure people back to the stage and into dancing. Where Guida top their glam rock with some sugar it is Faz Waltz who deconstruct it more to the bare rocking bone and take it down the harder route.

It is retro for sure but it is delivered very very well. And it does not matter if you are into old punk or into Oi! – they carry all of these roots with them and give it back to you.

In the end a lot of dancing came about and a lot of smiling faces enjoyed Faz Waltz. It was not sold out but the Monkeys was well filled (and those filling it took good use of the liquid supplies).

Thanks Monkeys and thanks to all who make the Monkeys happen – may you stay afloat for many many years to come. A great rooster of shows is about to happen for 2019, i’ll sure be there.