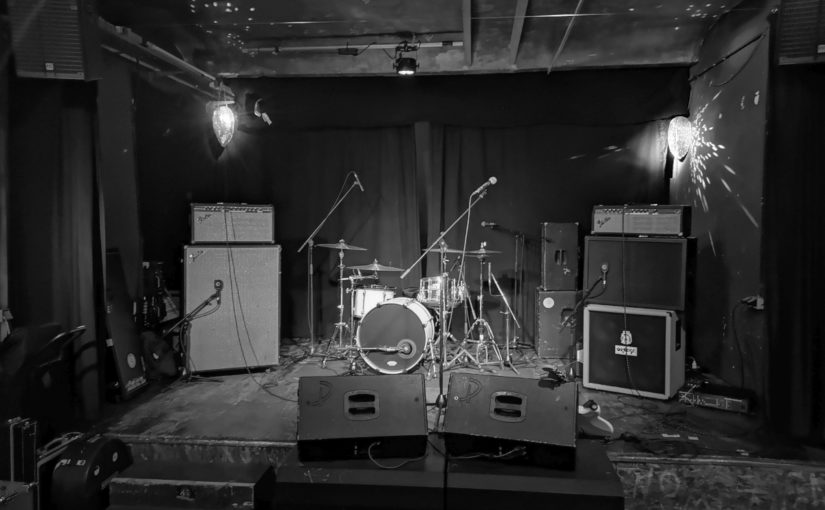 Following the raunchy party of the Bar Stool Preachers the day prior i felt drawn to the Hafenklang again, this time by word of mouth only: It’ll be great a trusted source within the business told me. Also references to Dead Moon were made but that band never got my ass of the sofa (for all sorts of reasons including “always the wrong date” and “too hairy“). But trusted sources are trusted sources and thus i took the short stroll down to the Hafenklang on rather lonely Friday evening.

The same would be awaiting me upstairs at the Hafenklang: Two bands, one bar hand, one sound man and one trusted source. With pride i was paying customer number one and my guess “… not more than 25 people will show up” turned out to be the euphemism i feared it to be.

First on H¥ena from Bremen, never heard of and to my surprise it was two guys only (with some big amps). And by the looks it was a Biker (that had better days) and grandma’s loved one – strange looks, strange setup. And once they plugged in and stumbled into the first song i was “uuummmmhhhhhh“. Whilst the first say 10 chords made all fear come true the initial song turned into the most heavy and massive wall of sound i have heard in a while.

I have no clue what the guy on the guitar does with his 6 string, a massive pedal board and two amps (and his guitar wired into both through some effects) technically but the outcome was sheer great for my ears. Wow – that got me. Big time. On top of that it turned out that the biker actually is a Professor for German Literature (and comes with the ability to not only produce a perfect drumming but also incredible command of the German language and it’s finer details).

It has been a while that a support band did strike me this way, what a massive sound. Stunning! And the songs where also not that bad – some just power blasts, some with neat stop/start and complex details. The set their turf as “two man- bluespunk / dirty rock for fans of turbonegro, the bronx, rory gallagher, beasty boys, queens of the stone age, motörhead and justin bieber” and i guess the only truth in there is good old Rory (though i believe that the guy from Bremen is not on a liver destruction path).

Well done boys, you surprised me! They claim to have a record out in weeks and it did strike me if this type of mu-sick actually works on vinyl. I will check it out but i can’t promise that it’ll work in the same way as live.

My advice: Go and feel H¥ena!

Next on Top Down and they started a bit holperig (i guess the 6 hours on the motorway from Berlin to Hamburg plus the empty space in front of the stage did not help to set the mood) but with a different setup and style: Sturdy drumming, and bass/guitar sharing singing duties on a single centered mike.

At times they were not my thing at all, at times there sounded almost perfect. For me almost every song sounded somehow sad but i could not make our the lyrics at all. They are a true international bands: Bass from Portland, Guitar from Berlin and Drums from Transylvania. Some of the few folks attending did nod on some songs and did smile on other – for me only those songs with some speed and in power pop territory made sense.

Would i go the extra mile for them? Nope. Where they bad? Nope. Would they deserve a different setting? Yes indeed. Playing a lonely club definitely is on of the challenges you have to face as a musician so it’ll be ok for them.

With that i took off back home, no hanging around just “time for bed”. But not without enjoying the empty harbor area just again.

That view is just a stone throw away from one of the old spots in Hamburg Punk History: The Krawall 2000 was located on this block to the right. And the area has changed big time from the run down area that was left to rot back in the 1970s to a lot of newer houses and better restaurants, bars and clubs. But that harbor is still there in always in view.

And that harbor never stops (remember, it’s a tide harbor) and as much as the harbor never stops you should never stop going and daring to take surprises on the live mu-sick circuit: It is worth it and much better than the telly (and at par with a good read) and you get complete surprises like H¥ena (from Bremen, of all places).

Good night and thank you for the fish universal scholar Dr. Axel Stoll!