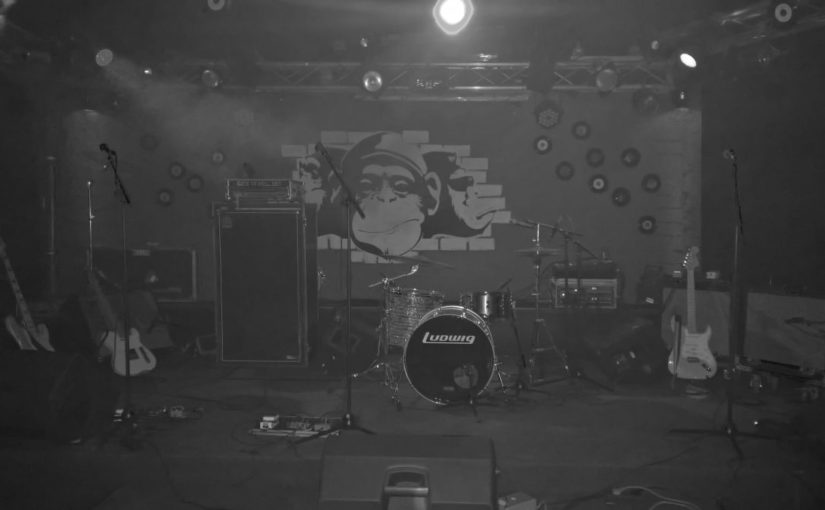 A wee bit more than two year ago the same package graced the Hafenklang and toyGuitar surprised me big time, be it their distinct pop sound or be it their unique drumming. So when that package returned to the Monkeys on a rather awful Sunday it was a sure must do for me and some connoisseur friends.

First on toyGuitar, entering the stage in front of a maybe half full club. Bad choice for those who should have filled the void, as they kicked off like this:

They have perfected their blend of pop, surf and punk – let’s call it Power Pop for now – even further and they are putting it out with a rigour (or drive, or force or .. joy) that feels unequalled. Sturdy drumming with a broad smile (a very broad smile indeed) , sturdy and hook line driven bass play, surf style licks on the left guitar and broad twangs and singing from the right guitar. Just perfect!

I have to admit i am sold on them, big time. The only pity was the missing merchandise (despite a lone T-Shirt), i think i would have bought anything off them. If i’d get a wish they should come back as a headliner for a Get Lost! Fest in the future, they would be able to send a packed Hafenklang dancing all night!

On the fun side they had quite some in-jokes of needing to speed up and not loosing time tuning instruments or replacing broken gear as that would make them Utters late, something that should not happen. Great band, great sound and a set that did make the audience smile and feel the sun on the skin (in desperate Hamburg April weather).

With some rearranging on stage, them toyGuitar members Miles and Jack where moved to left, Swingin’ Utters took the stage and blasted into their set like this:

Something felt different from the start and throughout the set to me and me mates, we all had the feeling of this being a much tighter and efficient set than many of the Utters shows in earlier years. That feeling was also supported by the selection of songs – bang bang bang came songs with less than two minutes duration.

Show wise it was typical: Johnny being Johnny and raging it out, Darius being Darius and playing it out (and providing vocals to some songs) whilst the rest provided a perfect backdrop and as said a very very tight sound.

Yes, the even played one of me favourite songs! Sing a long:

Yep, that is the style that is them Utters and that is perfect (incl. the lyrics).

As the show started early to give people a chance to not be home too late and catch an easy start into the workweek they decided to give the audience something extra – they did two encores!

And with that they where done, thanked the audience and … returned to the stage to pack up their gear and prepare for moving it out and on … to further tour dates. Don’t miss the package – it is a perfect package!

Was the audience happy? Yes the audience was happy – actually even prior to the show even starting, as you can see from the these smiling lads. Well done mates, you made the right choice!

And as ever thanks to the Monkeys for setting it up as an early Sunday show, we all gotta go to work on Monday!