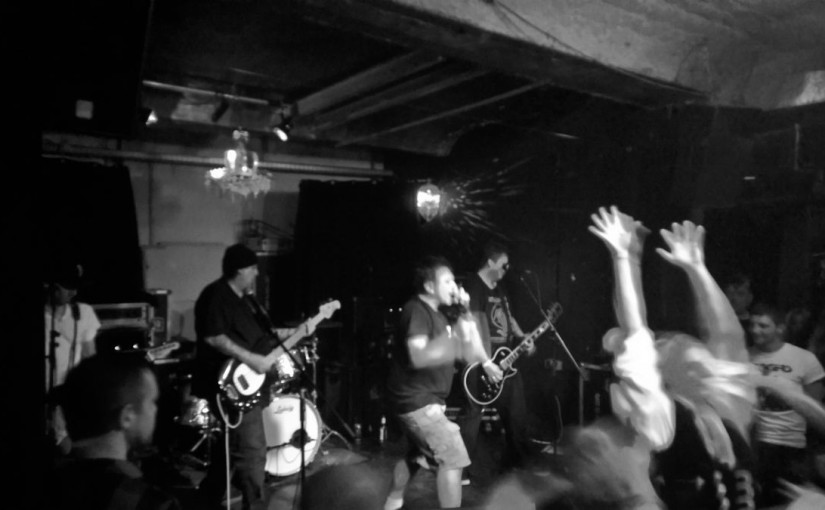 Their last real effort is from 1999 and their only steady member is Cliff Hanger, the manic singer. But their records are timeless beauties and i can still sing to any song from Rabid Reaction – so the choice between Anti-Pasti at Monkeys and The Freeze at Hafenklang was easy!

Support was Punktucke from Hamburg which was feared to be a bit of a downside, though they proved much better in the end. Me mate said „…they are boring, let’s go and see if we can have a drink outside“ prior to the show but then we stayed on. They have some good tunes, some even wander into post-punk territory. But what they don’t have is stage presence. And that add’s to the downside i guess. But a tight set and even some appreciation from the audience (120 odd who where there for The Freeze predominantly i’d say).

And then the fun started. It took The Freeze like 5 mins to get on stage, plug in, setup the drum and Cliff saying „OK, i think we are ready“. And real, rough and ready they where.

And there was no holding back, after Nazi Fun they stormed into American Town.

Bang! There are only few bands that could kick off with such a blast from the past i’d say. Sing-a-long galore!

And surprise, Cliff Hanger this time round was almost well behaved – last time in Hamburg he behaved a wee bit more … crazy!

And sure no hiding, backed by a rather sturdy band Cliff muffled his way through one classic after the other.

And that gave way to one of my loveliest songs – with just brilliant words:

That little story about loneliness is just on of the best songs ever.

And the people thoroughly enjoyed it, loads of singing, head nodding and dancing. And with a lengthy explanation they blasted into 25 seconds of „This is Boston, not L.A.„.

A nice way to sum it up indeed! Me mate Frosch, who sports a Boston (as in BossTones plus Boston skyline) tattoo had a big smile on his face!

And with some few choice words about how useless walking off the stage and returning is they threw themselves into what was the encore (not to forgetting to place a reminder on watching our backs when out there and facing them cops).

And a random bloke from the audience gave the classic that makes the headline on this one – trying to convince The Freeze to play another one he screamed famous word „… Germany, the punk rock capital of Deutschland„.

And Violent Arrest was followed with one of the fewer played old songs, Halloween Night.

And that finished off a great show and was some good Boston Hardcore. Loved it. And me mates loved it too!

And that gave way for a few more drinks in a dingy bar with some more classic sing-a-long punk. Great night out, best way to prepare for a work week away.