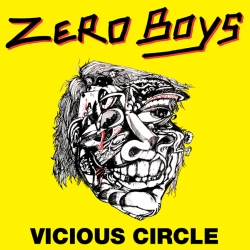 Boy, there are a couple of records that got me hooked on US/HC and next to Descendents this one comes sure in the top 5. The Zero Boys basicaly came from nowhere (or, as the US of A would put it „The Midwest“) and just like Hüsker Dü took everbody „left field“. I think they easily outplayed much bigger and more successfull bands of the early 80s but due to their location never made it big. Paul Mahern went on to become a producer in demand and they had a mass of re-unions and new line ups etc – their 1982 record though is the testament that there was sound out there in US nowhereland that we could never fathom.

1977 – it ain’t but this is early hardcore without all the metal – just punk rock
published by a cool lable – DIY on a local label, later re-issued by Toxic Shock
found in a cool shop – Konnekschen, where else?
catching sound – genre defining hooks and speed, no surprise that Paul Maherns other band was powerpop!
the lyrics – no bullshit and versatile on viewing the world!

Surprise that i actually like this one most: short, crisp, fast paced and a clear and easy message. But there is no bad song on this record, trust me!

Just class! Nothing to add!