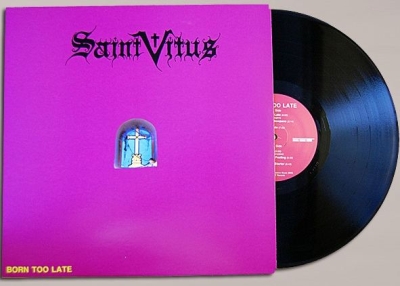 Now this is something completly different – at least back then, when we did crave for US Hardcore and stuff comming from SST (Black Flag’s Greg Ginns own lable). Saint Vitus reminded all of early Black Sabbath  and generaly where seen as Hardcore slowed down to the max. In short: They had a fucking unique selling preposition!

Saint Vitus where around the „hard“ music scene in LA but actualy only made it big when the charismatic Scott „Weino“ Weinrich joined the band in 1986, spot on when this record was completed. After an „normal“ disbanding of the band in the early 90’s (when Grunge broke big) they reunited in 2008 and are still going strong.

1977 – in essence yes but hey, this is now considered „doom“
published by a cool lable – SST, tick!
found in a cool shop –  … Konneckschen for sure!
catching sound – Yes – unique, slow, hard – best in class and genre defining!
The lyrics – dark and doom as doom should be! And no surprise drugs!

My loveliest song on this is a rather short one – if you dare check out the long rolling ones!

And see this just again as a perfect set, performing live at the Palm Springs Community Center on May 16th, 1986. It will kill all your thoughts about rock’n’roll galmour and brings it right back to the bare bone:

Note of warning: For those of you who complain about the visual effects on this video rember that back then it was VHS (analog) and most likely the guy on the camera was stoned too! So shut the fuck up – this was 1986 you twat!