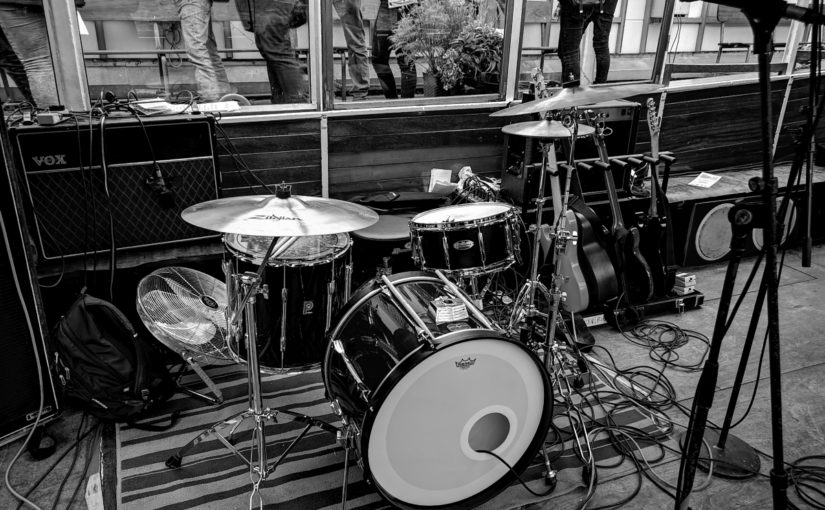 „All my friends went to Punk Rock Raduno and all i ever got was … Kepi Ghoulie and The Copyrights.“ On a boat. In Hamburg. But better than nothing. Actually quite good.

One of the Hamburg Punk Rock Raduno travelers was already back and joined me, the rest took easy flights home and were to be back in Hamburg later. And one of those who stayed on actually put an extra effort in to get me something more than nuthin‘ back from Bergamo.

What was at stake was something super cool, something handcrafted (and something i would have me love to accept in front of our door):

Ticket #55 did win this beauty, with #58 on me this was near but unlucky. And damn to learn later that the beauty was won by Marien Jonkers of the beloved Windowsills from Rotterdamn. I think i now must consider to burn all of their records in my collection. Whilst i was without luck, that one Punk Rock Raduno traveler that came home early had a lucky ticket and won … a guitar. Lucky you Uli!

The well filled but not packed MS Hedi was to set sail early, for two round trips through the harbor. First on Kepi with an acoustic followed by The Copyrights with their own set. After a quick changeover dockside for replenishment of booze it would be then a 2nd trip, this time with Kepi Ghoulie + The Copyrights = Groovie Ghoulies.

Kepi first and the ever charming guy. Armed with his acoustic guitar and his harmonica as a secondary weapon he provided us with some gentle songs from his vast output. I am not a particular fan of „acoustic“ as i prefer amplified strings. It may have worked better with some warm weather and sunshine but that Monday evening Hamburg was rather cloudy and cold.

Next The Copyrights, from Carbondale, Illinois in the US of A. From the school of Mass Giorgini as i like to refer this high energy pop-punk to. The internet (damn internet, never forgets) provides a much worse linkage: „Both the sloppy, slacker pop-punk of, say, early Green Day with the slightly more polished sheen of Teenage Bottlerocket or recent Bouncing Souls„.

And that’s what i did for the Copyrights own set – perfect pop (remember, it comes from popular) songs in best 1:23 tradition with loads of chorus, breaks and … little chance to make out lyrics given the tiny PA for vocals on the boat. But they have everything for getting a great live experience across. And they had a visible female support in the audience, actually not a surprise!

Bonus: Both guitars did not move the necks, hence non-one of the audience (standing in close combat distance) was hurt.

After a quick docking and a few more crates of beer being dragged on board the MS Hedi took off again into the sunset … almost. Kepi & The Copyrights took the floor and they kicked in like this:

It was to be a great mixture of Groovie Ghoulies songs either prepared or requested by the audience. Given the Copyrights energy and speed they where mostly uptempo and indeed they where fun.

For both it was the first time (as Kepi did not play bass for Chixdiggit when they graced the MS Hedi two years ago) playing on a small vessel and they had surprisingly steady feet (and stomachs) – nobody got seasick. They where lucky maybe, as there was little traffic in the harbor (ie. less waves from passing ships) and little wind.

An enjoyable evening with great music for me, my ear was also pleased by some sirens singing songs of „come to Punk Rock Raduno„. I think if i ever do a multi-day festival than it sure won’t be Rebellion and it can’t be Punk Rock Bowling. I guess then it must be Punk Rock Raduno. Let’s see what the 2020 schedule offers…