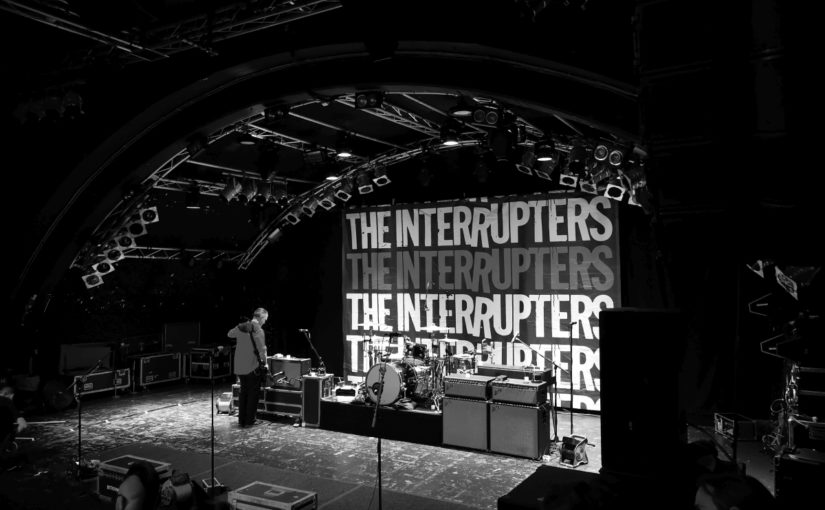 The Interrupters caught my ear early on in their career thanks to Hellcat Records, ie. the wings of Tim Armstrong. Their pleasant sound and quite fresh approach to fast paced Ska works well on record, hence i regretted it all along that they bypassed Hamburg over the years (they only ever came around as support for Bad Religion).

So when the show came up i got two tickets and was quite right, as it sold out in record time even being at the Markthalle (one of the largest club venues around here). So in the end a lucky mate, who missed buying in time, got the ticket. In return he treated us with free beer in front of the Markthalle.

Support was Not On Tour, the relentless touring machine from sunny Israel. They do Pop Punk and they never really caught my ear, though i tried multiple times.

They had to setup their gear in front of the Interrupters gear and that provided me with an initial feel of „rock show„. It was paired with a shitty sound, another „rock show“ feel. I endured a couple of songs but then resorted back out for fresh air.

Next on, sharp at 21:00, them Interrupters. They came on stage backed by „Ghost Town“ from The Specials and made a rock star entry. And kicked in from „0“ to „100“ in no time. From the first minute they commanded and pleased a willing audience, got plenty of applause and cheers.

All through the 80 minutes they delivered, they gave me a twist in the legs to move and dance (and many people did move) but that twist never arrived at my heart. My initial feel of „rock show“ was now paired with „professional“ and that would tear myself into two corners. One the one side they play pleasant and very endurable mu-sick, on the other side the whole show looked completely … mmhhh … rehearsed? Staged? A choreography (as someone suggest from Andrew Lloyd Webber)?

Not sure what words would describe it but is just did not feel real, it did not feel they way shows should feel or how shows should touch me. As such i now found a rare case where the records work for me (though they are getting more mainstream (radio ready) from album to album) but live it just did not work. No joy. No feelings.

Nevermind, the largest part of the audience did like it, including a wheele guy crowd surfing.

He got some flak from the security after the show, as despite him being a professional skater with his wheele and knowing how to handle that in extreme situations those that carried him won’t. And they could hit other, specifically to the front. It may be a cool thing (and a cool visual) to be up there but if you hit someone … it ain’t so cool anymore.

Once it was over 98% of the audience seemed to be happy. I had a final „rock show“ itch at the end: The Interrupters made a final curtain gesture but omitted their keyboard/horn enlist for it.

I enjoyed the music but not the show. It was 20€, so a fair deal. Will i continue to buy records of them? Maybe. Will i ever see them live again? Most likely not.

And on the sideline: Is Aimee the best crowd winning singer? Nope, whilst having a great voice and always reaching she falls way short of Jenny Angelillo. Way short.