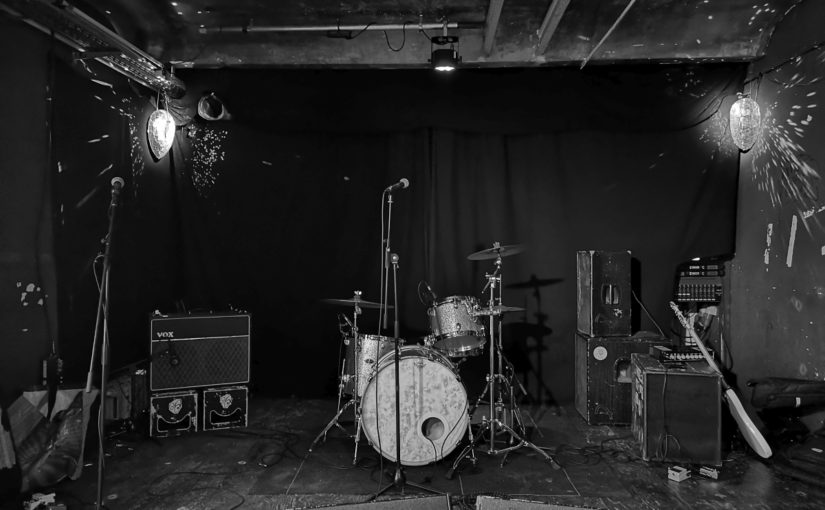 I have been taking camp at the Hafenklang over the last days it feels, 3rd show in 5 days and thus time to wind down. And wind down the theme was, as much as the good tradition of the K-Town warm-up was revived the K-Town wind-down was re-introduced.

And this time round it was two Swedish bands that where known not only for, lets say, outgoing live performance but also for taking no prisoners. As the Hafenklang stated in their own little marketending for the show: „Axe Rash  Hag will shave your head“! First on Hag and hair length actually was contradicting head shave. Two long haired boys paired with two girls. And off it went, full on aggressive H/C with a maniac singer.

Whilst the eye catching thing was sure Agnes on vocals the ear catching thing was the guitar: A great balance between shredding and a slight metal overcast. And to back that up sturdy and thundering drum and bass gave the backdrop.

I had no immediate comparison in my head and that gives you a hint how good it was. I liked it from the first song, the Swedes in the audience who traveled with the bands liked it and the 30 odd folks that attended the donation only Monday liked it too.

The interlude between the bands was short, chatting with people and watching a rather tiny cruise vessel leaving the harbor.

It actually provided a neat idea to maybe do a K-Town cruise – would the MS Hedi be allowed to travel through Elbe, Kiel Canal and the Baltic Sea to CPH?

Next on Axe Rash, where Agnes covers Bass duties. And you got less hair on the two boys, actually no hair but a great Void T-Shirt on the drums. And they kicked off like this:

Bang! I truly believe that bands who play live should make „intros“ (as much as i do believe in stage attire, in this genre most like to no avail) and as such this was a great start!

In your face vocals, aggressive undertone both through mu-sick and vocals and fast forward. Perfect if you ask me. They got the audience moving (both further to the stage and bodily) and they greatly extended their set beyond the 22:00 limit (where normally the table tennis starts).

Great stuff and at least one male person in the audience fell in love with them Swedish Girls on stage. Good luck mate!

As i am a greedy asshole record collector i have way too many records assembled over the years (4.759 as of today). As such some time ago i decided on some baseline rules, one of them is: Only ever buy a new record of a new band if the band has convinced me live. And then buy the record after the show from the band.

I took the Hag „Be my filth“ EP and the Axe Rash „S/T“ LP with me when i left the Hafenklang, so it tells you that both bands where convincing. Some of my fellow old Punk Rock connoisseurs who follow my adventures via social media claimed upon examination of the bands that it is just horrible noise.

I’d like to correct them: It is an Inter City Express, with a tuned engine, running at 200 mph through the station where you stand on the platform. And the passengers yell at you through the windows.

I loved that feeling on that Monday at the Hafenklang, it was a perfect wind-down.