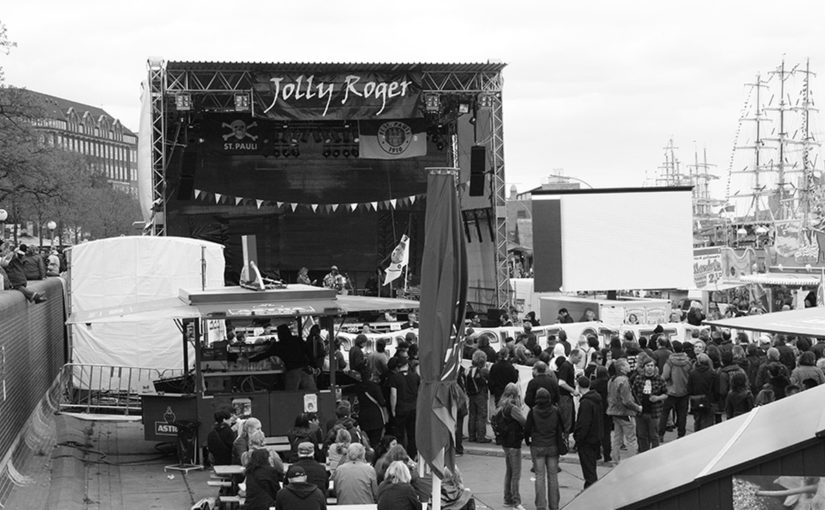 I have a natural dislike for Festivals and i have a much stronger dislike for Open Air Festivals. And i don’t like the big tourist things the city throws. Still, there was a small section of the line-up on the Jolly Roger stage during the annual harbor festival that did stick with me:

The Murderburgers are a top quality Pop Punk outfit from Scottland, the Monkeys Choir is full of friends and the Razors … are the Razors and a mainstay.

For me living on the harbor side it was a short but painful stroll through a zillion tourists, only to realize that them Murderburgers where reduced to a Duo. Their bass player was absent with leave, he was off sick in the Hotel. Still they decided to pull their set through, thanks for that.

Though the bass was sure a miss they managed to get the songs across quite nicely. I think this was down to the quality songwriting in the first place, some of them would also work on acoustic guitar only. Not a lot of people in front of the stage but still some decent applause.

Next Oxo 86, Ska influence Oi! with self proclaimed party potential. They had a huge crowd in front of the stage and they sure had a lot of movement in the crowd.

For me it was not so interesting, it was just that niche that i like a bit (on the edge) but not really – some songs where ok, most songs just did not work for me. Maybe the singer just talked too much…

What became apparent at this stage was that the concept of selling beer in bottles and allowing bottle onto the concrete is just stupid, most of the bottles ended up broken glass of some form and some even ended up as danger. Next Hamburg City Punk Rock Singers aka Monkeys Choir with i guess their 3rd official show, now on a big stage in front of a big audience. On the bigger stage they could position their groups well, the only thing that was lacking was a couple of more microphones to capture all participants well – but that would be a too big ask actually i guess.

They had fun and they emitted fun down into the pit – largely due to the sing-a-long potential. What definitely does not work is the guitar, way too dominant and way to many errors. It spoiled some of the great performances actually. I still like the concept and i do hope at one point in time they don’t need any electrical background anymore and the sheer volume of voices makes it happen.

Whilst the choir was singing there was also some interruption, a contingent of drug-infested street-living and on-the-ground-sitting-whilst-the-band-is-playing „punx“ did not behave and physical force was used to explain to them that their behavior was not tolerated. As much as i dislike violence i still believe sometimes it is justified like on this occasion.

By now it was dark and as it was river side it started to get a bit chilly, And i was annoyed by the too many people. But the Razors where still on and they do deserve my support, specifically as singer Klaus had his birthday that day (something that was celebrated in style earlier that day).

They took the stage, they kicked in with „1977“ and where i stood the sound was awful. The bass way too loud and harsh. I retreated to the other side, where the guitar was louder but the total sound was better.

Still, after a couple of songs i gave in to my dislike of the settings, a full week on antibiotics due to an infection and the cold.

Whatever the harbor fest will bring next year, don’t count me in. It does not work for me.