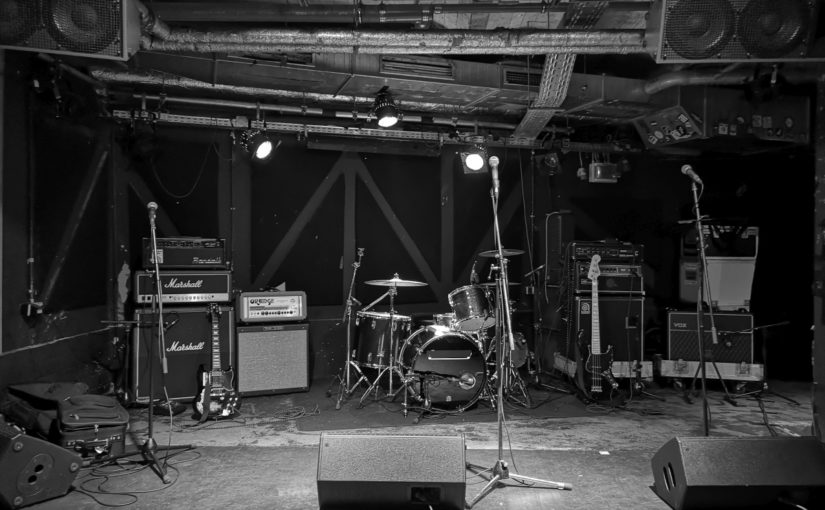 Bang Bang Bang – Hamburg not only suffers from a heatwave of a tropical nature but also from show overkill. Following Battalion of Saints i did let go Ruiner (and more) on Monday only to return to a packed Hafenklang on Tuesday. I am not sure if it was The Dickies, i think it was the combination of T.S.O.L. and The Dickes that was to be a wide spread mu-sick-ally and thus lured a wide range of people.

A surprise support slot was handed to Scooter Kids Must Die, local heroes. A friend of mine had them down as worthy though their self set style as „punk doom hardcore punk thrash“ did not speak to me. Others had them down as „THE new hardcore punk hope of Hamburg“ and that at least had me check them out whilst i guess 150 people decided to enjoy beer outside the Hafenklang.

For me they sounded at times hectic, at times fast and to the point and all the time with a singer that roamed the dance floor and yelled, mumbled and screamed. And moshed it out, more or less alone, in the pit. Mhhhh, tough one for me – i stayed on but left prior to the final song – i was not (yet) convinced. And the pairing was way too off against what was to come (says the man who preaches contrast is good).

Next on T.S.O.L. and ever since Jack Grisham in 1999 took back ownership of the name from the hair metal faction that did run it following the infamous Sun Set Strip Riot in 1983 T.S.O.L. are not only back for good but also enlighten the audience with a wide variety of mu-sick-al styles. Here is how they kicked off:

Ok, Jack has some additional weight on him but he still has a voice and has a band that fits him. They took the stage and gave the as good as sold out Hafenklang  a wide run through what T.S.O.L. recorded over the years.

And the audience was more than receptive. Actually rather enthusiastic (though not as much as for The Adolescents a week earlier). Loads of nodding, lots of applause and some dancing.

Fun moment was at the end of every song: If the drummer gave a fraction of a second of pause then Jack eyed him angrily and yelled at him to speed up and storm into the next song: Obviously he had a game plan and did not care if his team died at 45° degrees heat on stage. A plan is a plan and a delivery to the audience is a delivery.

Just perfect. And that is what i sometimes loved T.S.O.L. (and actually Joykiller too) and at times over all the years hated them for: Their spread of music is very wide and not that narrowed down as for other bands. And, on top, it is utmost fun when Jack starts talking between songs – he is a handsome entertainer!

Still they can trash out their old 1981 signature song „Abolish Government„:

For me they were just perfect. All i needed from a live show, although the sound was somehow not as perfect.

Next The Dickies, who seem to be on a two years rota: 2014 Hafenklang, 2016 Knust (a near perfect show with a „Hits only!“ set) and now back to the good old Hafenklang.

And surprisingly they took the stage with an old Beatles classic:

Unusual and it should continue in that vain – it was not to be a sing-a-long series of old hits, nope, it was Leonard playing some word tricks with hints towards the final album to come and new songs from that final final album where to be included in the set. And Leonard was not shy to announce that it would finally be end of … whatever.

The sound was still not perfect and on the stage it also felt a wee bit not in sync. There where quite some looks coming from the bass player towards Leonard and Leonard himself a couple of times was unhappy with the poor roadie who had to hand him the gimmicks to accompany the songs.

For me and some others it was a less fine show of The Dickies, something was just not right. Was it the band, was it the rooster of songs or was it the heat? Not sure – at least there is an outlook for a new Dickies LP and some final vinyl to accompany the many vinyl my collection holds (against a total 10 Albums (half of them live albums) and 20 odd singles (many in variations)).

The only wish i have – continued – is that i want to see them play „See my way„. That stunning Blodwyn Pig cover i desperately want to see live. Please. Pretty please me!

Just after midnight the show ended and it was more chats and drinks. And it was me at fault: The gang was there and i was not dressed for the occasion. What gang you might wonder? That gang with the „Free Melania“ shirt from the Adolescents show it was. The other sported it proud, i just completely missed out. Hence i accept that i was the culprit that night. Accepted mates!