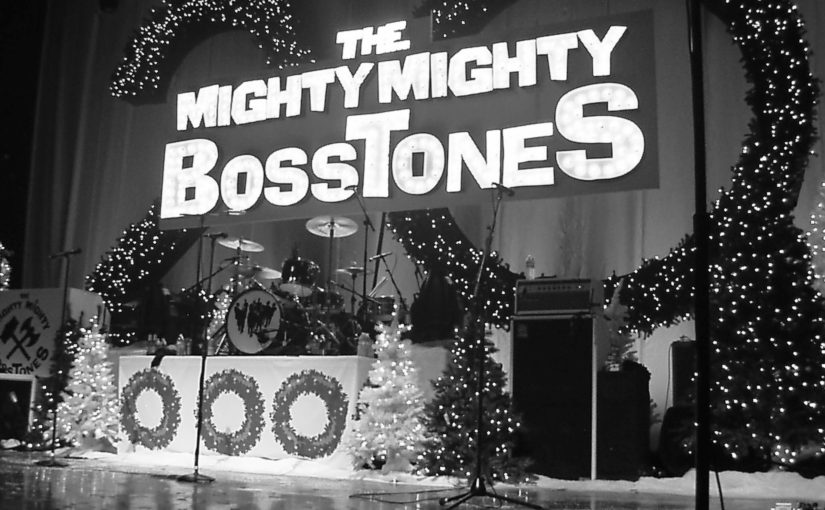 This is the 2nd time I am writing about my travel adventures to Boston to see MMB perform in front of their home crowd and if you’d like to read the full story in German you‘ll have to buy the OX Magazine, accompanied by a brilliant photo sponsored by Jay Hale from Fat City Magazine (thanks Jay!).

Actually it’s the 3rd time that I went to Boston for the Throwdown: 2010, 2012 and now in 2017 and the first time and this year weather conditions were pretty crazy. A heavy blizzard and amounts of snow that I hadn’t seen since I was a child almost spoiled the Throwdown in 2010 & the coldest temperatures ever recorded in Boston at the end of December welcomed my mate Wriedt and me in 2017 (- 20°C). City sightseeing during the day was a pretty freezing affair… I surely wouldn’t complain about a summer Throwdown, I love Boston but would want to see it in sunshine, with leaves on the trees for a change…

1st Night: Different than the years before the Bosstones invited fans for the Meet & Greet to the Foundation Room of the House of Blues instead of the McGreevy’s (a brilliant pub owned by Ken Casey of the Dropkick Murphys). Enjoying meeting old and new friends and the band we had to give the 2 support acts a miss unfortunately: Doped Up Dollies (female back up of Big D and the Kids Table) & Piebald had to give it a go without our support.

MMB had decided to kick off the Throwdown by performing their double platinum hit record LET’S FACE IT in full. The 20th anniversary of this fantastic hit by hit record, containing the title song that might sum up what MMB is all about best:

Such great lyrics mean so much in these crazy times.

MMB continued to play a dozen more songs across their 30-year career as a band that night, one of them a Johnny Nash cover version: “I Can See Clearly Now”, which they performed every night and which served as a protest song against the current state of the world and the US of A Government presently in charge in particular:

2nd Night: We arrived early at the House of Blues to catch VIC RUGGIERO of SLACKERS fame starting off the evening with a rather quiet set of acoustic songs. Then a murmur went through the crowd and Bostons mayor Marty Walsh officially declared what fans could already read in the Boston Globe and several Punk Rock websites the day before:

December 28 is the official „MIGHTY MIGHTY BOSSTONES Day“. What an honor for the band!

Later on during the set Dicky is going to tell the audience what kind of liberties he took „on his Day“: Shopping in the city without paying and parking his car in the middle of Boston’s busiest crossroad – it’s his city after all!

Next on stage are the RUDE BONES from Japan, a long running fellow ska core band MMB had toured with before and invited especially for their 20th Anniversary. They really got the crowd going and played a nice cover of THE SPECIALS “Little Bitch” at the end of their set. As a side note: While the lyrics to their songs are sung in English, the singer couldn’t speak without notes when addressing the crowd, he had to read every word off a notepad. Pretty funny.

Then we got treated to another 25 MMB songs cutting across all of their albums. Dicky points out once more that this year’s Throwdown raffle benefits the Shout Syndicate, a fund supporting youth arts projects, something the current government has absolutely no interest in as Dicky emphasized. Look out for recent interviews, Dicky is making absolutely clear what he thinks of Donald Trump, same as he did when George W. Bush was in charge.

The DOGMATICS cover of “Xmas time (sure don’t feel like)” opens the encore tonight, Xmas as seen from the perspective of a homeless guy, and they do have a really tough time in these kind of weather conditions! This thought-provoking song is followed by the fan favorite “Toxic Toast” and the wonderful “A pretty sad excuse”.

3rd Night: With the first 2 nights almost selling out there are absolutely no tickets available for tonight’s show. KICKED IN THE HEAD from Boston kicked this show off, followed by the mighty PIETASTERS from Washington, a band I was extremely looking forward to see once again, it must have been 20 years when they played Hamburg the last time. One of the very best in the genre, although their Ska is rather Soul infused with only a little bit of punk in the mix. Stephen Jackson has a phenomenal, very soulful voice and the 5 horn players are pushing their sound all the time.

Playing songs spanning their 27 year long career I could have done with some more songs from “Willis”, widely considered PIETASTERS best album – although I really love each and every one of them. Let’s hope they somehow manage to tour Europe again sometime soon – not exactly easy for a Big Band like this.

Following on from this perfect support MMB kicked into a brilliant, really strong set themselves. “I want my city back” and “They came to Boston” paid tribute to THE city early on. Saxophone player Tim “Johnny Vegas” Burton singing “Chocolate Pudding” was a special and rare, or rather “Medium Rare” (lol), treat.

Time for some statistics: If you are travelling to the Hometown Throwdown you’re not seeing the same show every night, all in all MMB play close to 60 songs spread across the 3 nights. I did count 5 songs that were played every night: “Someday I suppose”, “Rascal King”, I can see clearly now”, “Don’t worry Desmond Dekker”, the song about friendship and unity that you will always find in a MMB set list I suppose, next to the inevitable “The impression that I get”, their biggest hit to date, still played on the radios and turntables worldwide 20 years after it’s release.

I also had to think about the many smash hits that they didn’t play: “So sad to say”, “Wasted summers” or “The daylights” – just proves what an extraordinary band MMB are. Later in the set we got treated to the absolute highlight of this Throwdown, and of any Throwdown I’ve been to until now. MMB perform the PIETASTERS song “Ocean” together with them, same as “The Impression that I get” and finally, of course, “Lights Out” to end the regular set. With the power of 8 horn players on stage and 4 vocalists singing “A little bit ugly” this was a very, very special treat.

Next to Dicky, Stephen Jackson and the singer of a MMB cover band from Chicago the vocalist of the Australian Skapunk Legend PORKERS took the stage for this song. On the guitar, on all 3 nights of the Throwdown, MMB were joined by a special friend for a couple of songs, Tim Brennan from the DROPKICK MURPHYS.

Tonight’s encores are “737/Shoe glue” and “Pirate ship”, hardcore fan favorites to end a great night. The night shouldn’t end just yet though as we joined the aftershow party at the Foundation Room once more. While my mate Wriedt got his old MMB show tickets signed bassist Joe Gittleman told us that the new MMB album called “While we’re at it” should be out in May (might be June or July now), dancer Ben Carr would love to tour Europe again, hopefully that works out with the new album being released. And hopefully they return to the Markthalle in Hamburg, there are still so many fond memories from their last show there. Give it a try MMB’s!

Last but not least my dutch mate Grat, who must be Bosstones worldwide supporter #1, never missing a Throwdown, got presented with the bass drum logo for the 20th Throwdown by drummer extraordinaire Joe Sirois. A nice addition to his MMB museum in Venlo (he is still hoping that MMB will open it officially some day).

New Year’s day in Boston: NYE got spoiled by the weather somehow, no fireworks due to the extreme cold. Still had a great night out at McGreevy’s with pictures to prove it… Before our flight back to Hamburg on 1st Jan 2018 we visited the Middle East club in Cambridge, home to many Throwdowns and the MMB “Live at the Middle East” album from 1998.

And we got really lucky. Started a conversation with the barkeeper, dutch old school punk Paul, and as he was showing us around the owner took over and showed us everything, including the main club downstairs, with a limited capacity of 575, and the double platinum record of “Let’s Face It” on their wall. Unfortunately, the Middle East became far too small for MMB as the owner is pointing out, tickets were sold in a couple of minutes…

A superb finish to another great trip to Boston to see the best band in the world. We got lucky and just missed even more severe weather conditions that would have led to flight cancellations and made the news back home. I’ll be back for sure when MMB play their 25th Hometown Throwdown in 2022! (A big KISS to Frosch and Wriedt for this one, a more than worthy show to report on late – thus here you are (4 month into 2018). Let’s hope them BossTones indeed release a new record and make a surprise stint in Hamburg just like them Descendents)