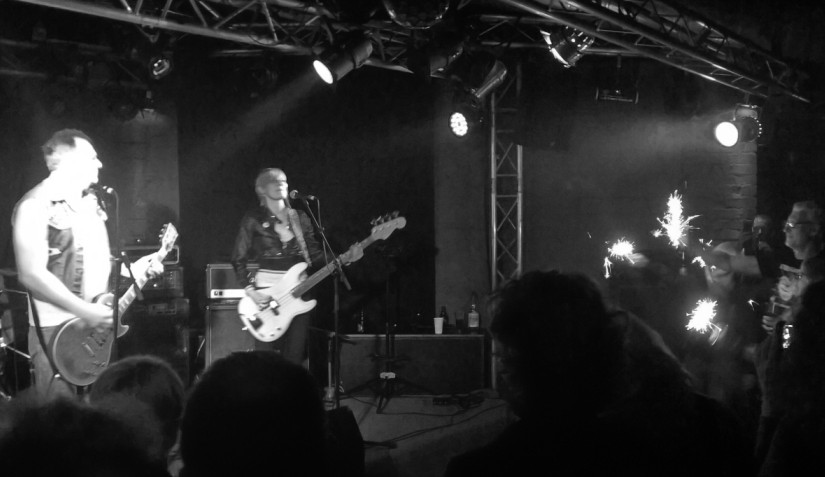 Whilst Thursday was devoted to explore new sounds and see new bands, Saturday was something more traditional and turned out to be equal fun, though with a setting of an average age quite above the K-Town Warm-up.

A surprise slot was down for The Mad Moiselles from Hagen and they where plagued manyfold: The audience rather boozed and mingled in the pub, they where singled out by one audience member as ‘… god, they all somehow look ugly’ and in reply someone else made a firm statement as in ‘… i lived for 4 month in Hagen, it is ugly and they all look strange there’. In other words the troops where not up for them but they still delivered some good 1976 styled punk rock with an emphasis on “76” and “Rock” (not unexpected for a band that sported Thin Lizzy and Downliners Sect T-Shirts).

Next Hamburgs own Gerd and the fun element of the evening sure was there, all the classic hits that Gerd did write 38 years ago where served and good interaction with the willing audience was ensured.

I guess it is called the home advantage, where 80% of the audience knows one or more members of the band on stage. Sometimes musicians are lucky!

And people got carried away, dancing and singing along and demanding Gerd’s 1967 smash hit – and once served celebrated it with fireworks.

That done it was time for the headliners. Two brothers on strings and a drummer. The most simple setup but also the most welcome recipe for winning. As in over the audience. See how they lured people out of the pub and back onto the dancefloor…

And sure thing the audience knew what was being served: Mid paced melodic punk, with great vocals and choruses and sure melodic hooks. And all of that served precise. To the point. No nonsense.

They are around for such a long time and they get their show across to small and large audience with a smile and with an eye for detail: For those who read here on a regular basis it is known that i do like consistent stage attire with something special. The Guitar Gangsters did get a 9 out of 10, their hidden gem was 3 ties – in Black, Red and Gold (from right to left) and thus the german flag. Nice hat off to the country where they constantly enjoy success!

And by the end they had everyone singing and moving, just a few barflies took it easier. How to sum them up? ‘Critically underrated for years‘ makes a good line. They are in it for the fun and they serve it with a smile. Well done lads!

As they where so great and they never had a hit on MTV here are more pic on heavy rotation:

And as ever thanks for those who turned up, supported the bands and supported that little gem hidden away in Altona. Love it. Love my pint of black gold too – where else can i have that and see great bands?