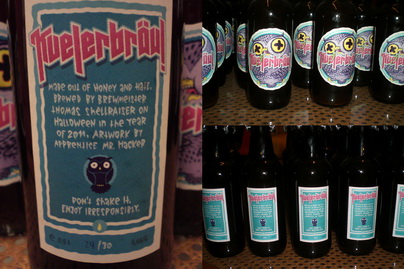 Now this time of the year we need to be more concious – so fuck vinyl, this is CD only. And the band is currently on tour in Germany but not playing Hamburg, damn it. I got accross this lovely beast from Norway via the movie „The Troll Hunter“ (a „fantasy/horror movie“ in the form of a mock documentary from lovely Norway, but this ain’t a place for movies) and they realy rock. And the video to the song they did lend to „The Troll Hunter“ also is quite nice – gore gallore! They rock with 3 guitars (!) and blend some fresh black metal into hardcore punk’n’roll. I’d say they took a crossing that Turbonegro walked by in ignorance. And with me, that was a wrong decission by the Turbo guys!

1977 – far from, but speed, speed and speed (and sure 3 axes) make it work!
published by a cool lable – no clue, but an independent metal lable from Norway. Mhhh?
found in a cool shop – no vinyl and modern times, via the Internet (damn Internet)!
catching sound – that the decisive one – their sound. best quote: „their dirty power-chord progression produces aural orgasm instead of disappointment“!
not too bad words – fuck, it’s norweigan. i speak a bit danish, that does not help. it’s screams anyway to me!.

Another comment i did find on this one is „this is live music bottled“ and yes, indeed it feels like that. In that fashion, they also offered a limited Kvelerbeer „KVELERBRÄU“ („made out of honey and hate and on Halloween 2011„) with (sic!) 6,66% alcohol: