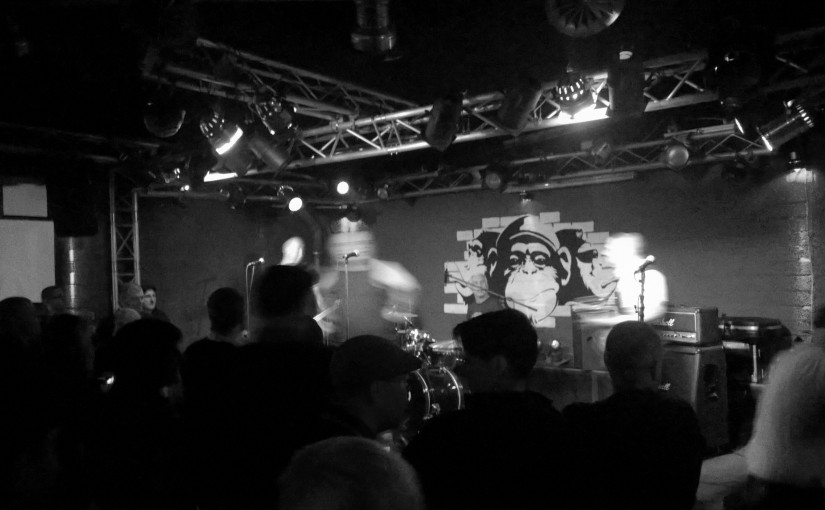 Another Friday night out at the Monkeys, another night for some unpretentious rock’n’roll.

The fun was that i was out with a mate whilst our wife’s decided to stay at our home, cook some great food and enjoy the Friday without us. So i left home for me mate when his wife arrived and came home late in the night only to hand her the taxi in which me mate was waiting – never had that setting and really had a laugh! At the Monkeys this time round one of the hottest new shits was waiting: The Suede Razors from the US of A had all the records collectors excited with their chain of great 7″s, so i thought it would be a rather full house and a lot of eager people to see them.

Wrong thinking, they are still a niche i guess.

The night started off with Last Crusade from the UK who, from all i could make out, are a rather new band too.

I think they fitted the bill with Suede Razors well, they play something unique too – a blend of old punk (as in 1977), harsh OI! (as in 1982) and they do also throw some hardcore elements in. They where though hampered by some technical issues and the lacked stage presence and persona, so they did not really get the rather small crowd in motion. But they got their share of applause for all the effort, at least. And in between they actually had some lovely chords.

Next on Jenny Woo, in her solo acoustic setting. Large banner, small girl and a strong voice.

I do like her stuff but i do like it more with a band and an electrically distorted guitar. But she does what she does extremely well, always with a smile and against many odd voices from odd parts of the skinhead scene – and it takes a hell of stamina to get on the stage just with an acoustic guitar and use your voice as the stage presence!

Finally the Suede Razors and from the start (an intro sans the singer) it was a different league: You could sense that they all had their share of experience in other bands and that they all where quite gifted in terms of handling their instruments. And tight together. Very tight. From the moment the singer entered the stage you knew it was to be a unique and joyful experience of rock’n’roll with a scent of Aussie thrown in (and that was late 70s AC/DC and/or Rose Tattoo i guess).

Singer Darrel not only has the belly but also the voice and guitar, bass and drums provide the perfect backdrop. Items worth to note: Tongue-in-check vocals and stage presence by all. Good chatting with the audience and all items i’d like to see covered covered, up to and including 3 points for „anyone’s team“ on the weekend. Puuuurrfect (though it did not happen in the end – the 3 points at home).

Did they live up to the quality of their singles? Yes they did and i guess they took the audience by storm. It was a bit like Giuda – people did not fully know what to expect and where positively surprised. For myself i was happy bunny all over: Out with mates, a pint of Guinness in me hand and some driving skinhead rock’n’roll. There is little that can beat that setting, so much better then say the TV Program on Friday 13th.

Thanks to the bands and thanks as ever to those who made it to support them at a cool new place for live musick. Love it.