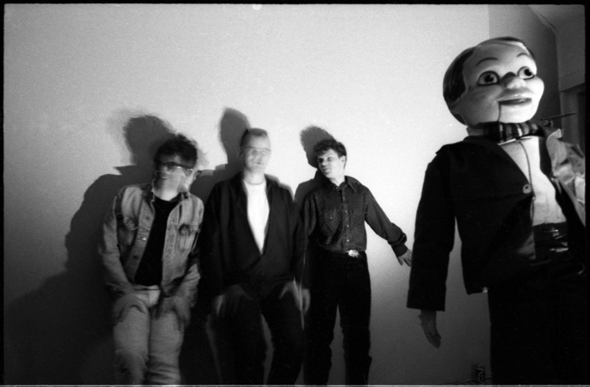 Now this is a fun one – one of the view times TV made me explore a band. Back in 1993 my soon the be wife already had pay-tv (“Premiere”, now Sky) and they had some strange stuff there including a canadian commedy called “Kids in the Hall”. Highly entertaining and with a distinct “twang” on the musical side. With a bit of pre-internet searching i found that the theme-song was from “Shadowy Men on a Shadowy Planet”, from Canada, and they released through Cargo – got it!

1977 – mhh, this is instrumental. few bands in 1977 burned their finger on that one!
published by a cool lable – Glass Records in the UK did the 1988 Vinyl, Cargo re-released it in 1990 when “Kids in the Hall” went big.
found in a cool shop – ticked, again Martin Stehr’s Drugstore
catching sound – reverb and instrumental. surf. dig it! next thing cool to punk rock!
not too bad words – hahaha, having a laugh and having a say is one in one!

They dispanded 1996 and left behind quite a legacy and where instrumental (sic!) in driving other bands. Sadly bass player Reid Diamond died in 2001 of cancer. Damn.

This is the famous theme song:

And this is my loveliest thing from “Kids in the Hall”:

Shadowy Men on a Shadowy Planet served as the background band and sometimes even played in the foreground. You can listen to all sound snipits from all episodes here!