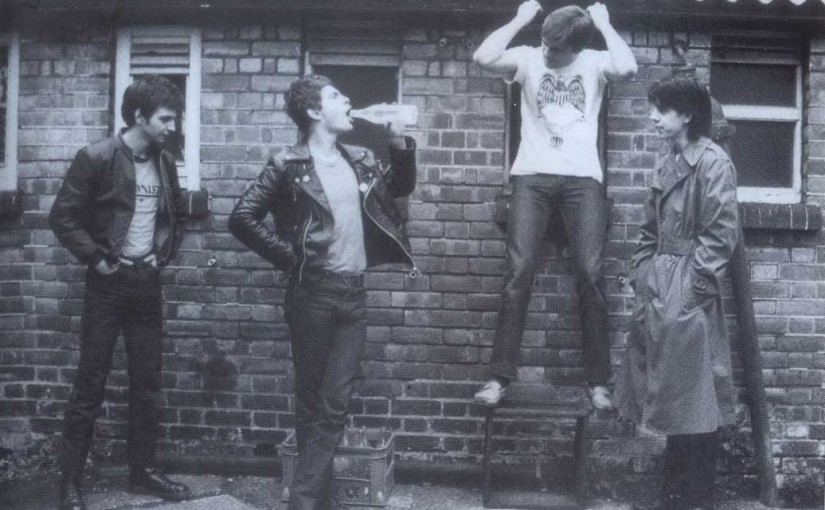 The might mighty Rejects! This was actualy the first record i bought of them, quickly followed by the other singles (Flares&Slippers! War on the terraces!). It is real, rough and with a snotty style – and it holds endless truth: WE CAN DO ANYTHING!

1977 – come on, who needs 1977 in 1980? OI!
published by a cool lable – that is Zonophone, an EMI outfit of T.REX fame revised as home of UK Street Punk, not realy cool. But was home for some cool stuff in the 80ies.
found in a cool shop – ticked, Konneckschen again.
catching sound – Mickey Geggus defined the a whole genre with his guitar, so YES!
not too bad words – this is how they felt – comming from the east end background they just felt they could do anything and right they where. for some time…
collectors value – do i fucking care?

And did they give a fuck about the world outside? Rightfully not! As in their own words: „The world against the Rejects … and the world never stood a chance!“

But that is not the only reason, the other sure is they where lads from the street and they where no-nonsene, see this 1981 interview:

Make sure you check out Mickey brother Jeff’s memories of the old days „Cockney Reject“ (John Blake Publishing, ISBN 9781844540549) – „As lead singer of the Cockney Rejects, Jeff Turner was responsible for some of the most explosive gigs in musical history. Adopted by West Ham hooligan mob the ICF as their band of choice, Jeff and his band frequently had to deal with the kind of violence the ICF usually reserved for the terraces. Although he never condoned their actions, as a teenaged boxing champ, Turner often found himself in the thick of things. This is a story of what it’s like to go from the East End streets to being a teenage pop idol and back again. Gripping from the first page, Cockney Reject is his astonishing story told in his own words.“