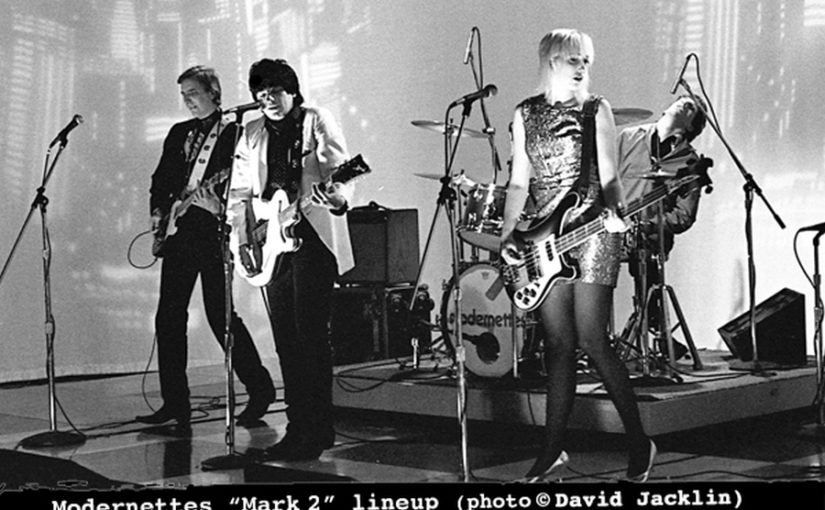 Oh Canaduh! This is more history from Canada and this is even more underrated – this is most likely the definite punk/power-pop trio in history. They got it all – style (and the good looks of the girl on bass), songwriting, punch and great tunes. The only lived short (from 1979 to 1983, with their peak being 1980). But they did leave something behind, oh boy, this absolut stunning 12″ EP.

„Some punky powerpop now and then is exactly what we all need to be able to coop with life. Canadas Modernettes does everything right, up till the title track. It’s catchy, it’s intense, it’s great, it’s awesome. Hell(paradise?) yeah, they make smile the whole sunday long which makes it’s so much easier to do the laundry and clean my apartment.

What’s for dinner? Mmm salmon. Pink innersleeve and pink food. Take note of the great looking sleeve. Always been very fond of squares and circles. AND! AND the production! Oh man it’s Bob Rock you know!“ That comes straight from our bible, KBD!

1977 – sure, The Jam where part and this truely is!
published by a cool lable – a local indepdendent lable, tick!
found in a cool shop –  … Michelle Records if my memories serves well
catching sound – POWER with a capital P like in Punk Pop!
The lyrics – simple teen fun – cool!

My favorite is Barbra, a timeless ode to school and love and girls and and and:

and it has been glued to film perfectly and even got restored to HD – modern times, tststs:

And for those who are by now deep in love with the girl on bass – Mary Jo Kopechne has for a long time retired from music and lives a remote life on her horse farm:

What do others say?