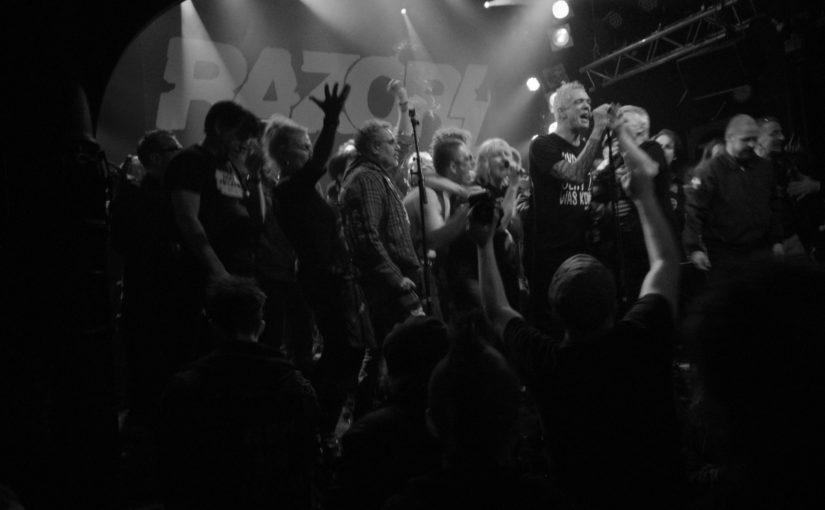 For a change this year me and me love stayed in good old Hamburg for the year end and thus i was faced with a dilemma: Sure i was due to attend the annual „Burn down the Baum“ Class of 1979 Party at the Knust but one of the greatest Ramonescore bands, The Manges from sunny Italy, where also to play Hamburg.

So what to do? Thanks to mindful promoters the stage time for The Manges down at the cellar of the Molotow was set to 01:10 of the 31st, so assuming that the Razors would finish around the midnight mark would make a swift change of venue possible. From where i sit, that was a plan! It came at the cost of dropping the after show party (and the associated hangover next day) but still it was good plan.

It started early and the Knust was facing another sold out „Burn down the Baum„, Version 11.0 actually.  And as ever it was one of the „Know 50% of the audience by name and know the other 50% by sight“ nights that had you say „Moin“ to an endless number of good folks – from near and even from out of town.

First off where Spit Pink from Recklinghausen, a young band that thanks to the Razors got the big stage. They sure where limited by the audience rather saying hello outside the big hall and, as far as i am concerned, they where also guilty of getting people to eye & ear them and move back out again.

I have to admit that i did not dig them, too much Rock infused Punk and without a real hook. So after a couple of songs i strolled back out for more talk (talk is cheap, you know) and did not really continue to listen. Me mater Peter later mentioned on one song „Hey, they now sound like Ideal from Berlin“ and someone replied „That was an Ideal cover„. I think that nails it for me, i saw Ideal 1981 at the Logo in Hamburg and they where nice but too much Rock – full circle back.

Next on The Outcasts from sunny Belfast, a band that is up there in the Top 10 of 1978/1979 Punk forever. And a band that the Blackpool Pilgrims continue to praise as „they still have it„. Whenever they played Hamburg before i missed them so it was the first time for me to see the current version and make me own judgement.

And that judgement is all positive and mainly that is positive because they do not try to play 1979’s sound as a 1:1 copy today but they have taken the freedom to both turn their sound more modern but also give some of the songs a slight spin to another style. And that makes it worthwhile!

What is odd though is that many of their songs back then where under some sort of Teen Theme and thus make you smile when grown up men in best pensioner age trash out „I don’t wanna be no adult„:

They where good fun and they also gave the audience a wide spread of their recordings, including their Rockabilly area. And they included an excellent Rudi cover (and thus another teenage angst song).

It was sure thing not „Hit or Miss„, it was Hit on Hit and presented with today’s energy and speed. And when at the end it came to one of their best sing-a-longs they had won the hearts and lungs of the Hamburg lot and their got the crowd singing (and many can still relate to the line „you better start running because the cops are comming„):

Someone mentioned before the show that the big stage of the Knust and the 450 folks in the audience is what they deserve, i tend to agree with that. If i had a wish to come true than someone would throw a Belfast Tour and give us SLF, Undertones, Outcasts, Rudi and Protex at the Markthalle. Damn, that’ll be a fun night.

And just because it is this time of the year: Here are the mighty mighty Outcasts at their height live at the Ulster Hall, Belfast. 24 April 1980:

Do i have to mention that i was and continue to be sold on The Outcasts?

And that gave way to Hamburgs oldest and finest, the Razors are now 40 years in and without a doubt they are a mighty force again. Nevermind the ups, the downs and the times of breaking up of sorts. They are here and they want to enjoy the time with the lot.

And thanks to the excellent sound system and capable hands of the Knust they sounded better than ever and even old trashers like „Madhouse Meeting“ sound so much better today than ever before:

It is thanks to the Razors that so many old friends get together and chat, enjoy and booze and if that tradition ever stops than plenty of folks will miss that feeling of unity, that little spark that ignited in 1979 in Hamburg and is still carried around by so many, no matter what they do today. Just splendid!

But where is light, there is also dark. And times have come darker for one and plenty of folks in the audience knew that one is on a hard battle with the big fucking C. So between songs they gave him support by cheering his name and when it came to „Heroes“ at the end of the set for many the biggest hero was up there on stage.

That and some encores finished set and at the end the Razors had their friends on stage to give support with a mighty voice:

And being young is a gentle reminder, back in May 1978 the Razors played their first show with Klaus on vocals and some pictures of that made the long distance time travel. Legend has it they only had rehearsed 3 songs and played them all over (because the lot loved them instantaneously).

It was a brilliant evening and i would have loved to stay on for cheap talk, cheap frills, cheap beer and not so cheap hits from DJ Schaub but, remember, i had a plan. And plans are there to stick to. So i muffled a quick „bye, see you at the Molotow“ (and got some „you’re nuts“ views) and strolled into home direction, which would take me to the Molotow.

I’d recon that for no other band i would have endeavoured such a double feature but The Manges are just a legend (and Andrea Manges has with The Veterans another high class outfit on the circut) and have never played Hamburg before. I made it just in time to see the support band packing up and realising that the average age of the audience has just dropped by 20+ years compared to the Knust.

At the Knust it was Oldpunks and the Class of 1979, down at the tiny cellar of the Molotow it was Pop Punk 20somethings largely.  Just puuurfect, as puuurfect as The Manges intro with their Hockey classic „Panic at the Ice Rink„:

From the first chord i knew i had choosen the right plan, there is rarely a band of the Ramonescore genre that can light up a tiny dark cellar with their songs as much as The Manges did. And it was not only the mu-sick, it was also the joy that emitted from the stage that did shine like a sun.

That sun though must must also shine on The Manges (remember, they are from sunny Italy), so my plea would be to get them back to Hamburg in summer and have them play together with their side-kicks The Veterans on the MS Hedi, down the river Elbe with a gentle glide into the sunset. Oh Boy, that’ll be like on of the best shows to watch out for. Most like that ain’t gonna happen so the 2nd best best thing would be to go down to Bergamo!

I do not even know where to start in my praise for The Manges, it was a perfect set – like 30 songs in 40 minutes, some Ramones cover and always with a smile.

Thanks to The Manges for waiting for me (and the two others that made way from the Knust to the Molotow) and thanks to that plan my hangover on the 31st wasn’t that bad – i was just fuckin‘ tired.

And because that genre is one of the genres i really dig and because it is that time of the year i give you two additional exhibits, both themed after a place definitely worth a visit!

Now go for Easter Island, where the sky is full of light: