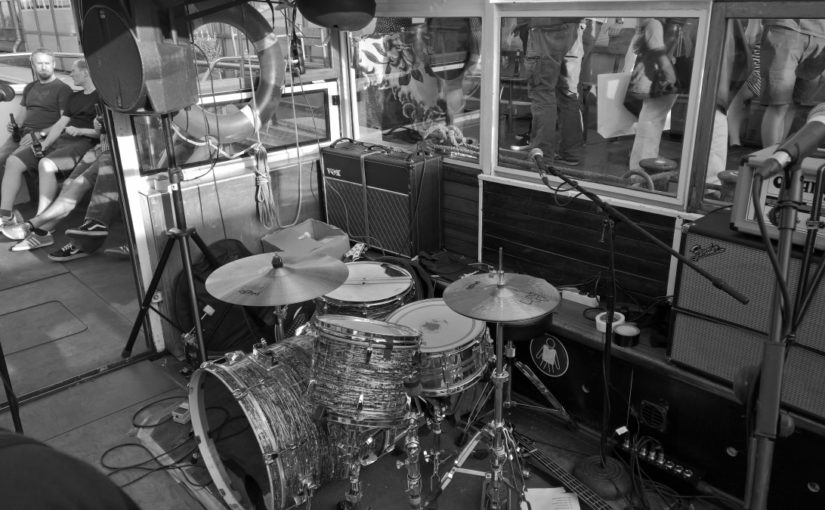 Ever since my beloved football team resides in the 2nd League it has been a common fixture to see a Friday home game that kicks off at 18:30 followed by a show in one of my favourite clubs nearby starting somewhere after 21:00 – so a nice entry into a weekend with some great footie and some lovely mu-sick.

This Monday evening it was all upside down: The Haermorrhoids and Chixdiggit (a professional rock band from Calgary) where set to grace the MS Hedi (a tiny vessel orbiting the Hamburg Harbour) and Dynamo Dresden was set to face the mighty FCSP at the Millerntor in what was the first home game of the new season.

The MS Hedi would set sail at 19:00 and kick-off for the televised Monday Night Top Game was to be 20:30 and thus throwing me and some mates into difficulties. We decided to keep the route, though reversed and in consequence accepted a run from the riverside through St. Pauli to the stadium, knowing we would only make it to half time.

Support on the MS Hedi was by hometown heroes The Haermorrhoids who, by today logic, sport a rather old fashioned pop punk in US style. Currently they seem the play every slot they can go onto and playing so often has created a tight set. And indeed a tight set was delivered on the slippery planks of the MS Hedi.

They have their own songs, they have some clever (Dicks – Hate the Wasserschutzpolizei) and some less clever covers (Ramones – Havana Affair) but most of all they have drive, they have chorus and they have presence:

Much to my surprise I did dig them, either must have been the sunny surrounding or simply the fact that they were indeed solid. I guess I’ll soon have another chance to grab them and then will see if it also works in a dodgy, filthy and dark club.

With some short re-dock of the MS Hedi and some swap of equipment the party set sail for another journey and this time it was for Chixdiggit to accustom themselves to the non-existing stage, the ever moving floor and the fact that you just can’t swing around with your guitar neck out as you would hurt someone.

Without further ado KJ and his ever changing backing band took the floor, did little adjustments of the volume levels of the amps and questioned the audience if all sound great. It did and thus the show went ahead. And from the start it was “fun fun fun” and loads of smiles.

And as always KJ was the ever friendly and talkative frontman that kept the audience engaged and in sync. And because of the setting on the vessel he gave the song selection to the audience, seeking input and consent on what to play next.

Fun moment was when KJ got slightly distracted and his eyes went really big: Two huge Navy vessels came into very very close view (literally the tiny MS Hedi came to deliver a broadside of Mu-sick) and for a second KJ lost his plot. But then he was quick-witted to change the words of the song on the fly and put these nasty gray monsters into the flow.

And as this seemed to be a lucky day I was able to get my very personal favourite song done by simply throwing it in at the right point in time. So here is the ode to the famous Boston Bruins goalie, not played on ice but on the jucy waters of the river Elbe. Nevertheless, it’s a timeless beauty and one of the most perfect odes to a sports hero.

And they kept playing, KJ kept informing fans (many came from abroad for this very special charter cruise) about the things to see riverside (like our fucking expensive Opera House) and they just could not stop playing. Even as the captain turned the MS Hedi back to the landing bridge they blasted another one only to try to do a final song when the vessel was already moored (something that technically wasn’t allowed).

Great show, loads of fun and with a perfect sunset. Me mate Frosch got all exited that he wanted a memory but he spoiled it by telling KJ that he has a ticket for footie and no spare for Chixdiggit (who were interested too). Bad move mate, bad move!

And then we had to hurry, already knowing that we missed two goals (unfortunately it was 1:1 rather than a joyful 2:0). I arrived on my seat  just when the half time whistle was blown.

Me love and me friends reported „soso“ for the first half and noted that we gave away a rather easy goal. Starting into he 2nd half FCSP got the better of it and was able to turn the almost perfect tactical set visualised below into quick attacks, scoring another goal by Buchtmann and almost scoring a 3rd one (offside by inches).

But then again a tiny miss in the defense gave away another goal and then Dresden did shut down and the mighty FCSP never got back into danger territory.

And just seeing one half was strange, so i never really got into it in the same way i usually do. Still, unbeaten and looking up rather than down – that’s a good start into the season and valued by the fans.

And as the evening started with singing it also closed with the crowd singing for the team.

And fun thing: All goals for FCSP this season scored so far by Buchtmann! Every „Team of the week“ of the German footie paper Kicker included … Buchtmann! Great to see him excel this season!

Forza FCSP! And thanks Chixdiggit for ensuring my upsidedown Monday evening did work out. 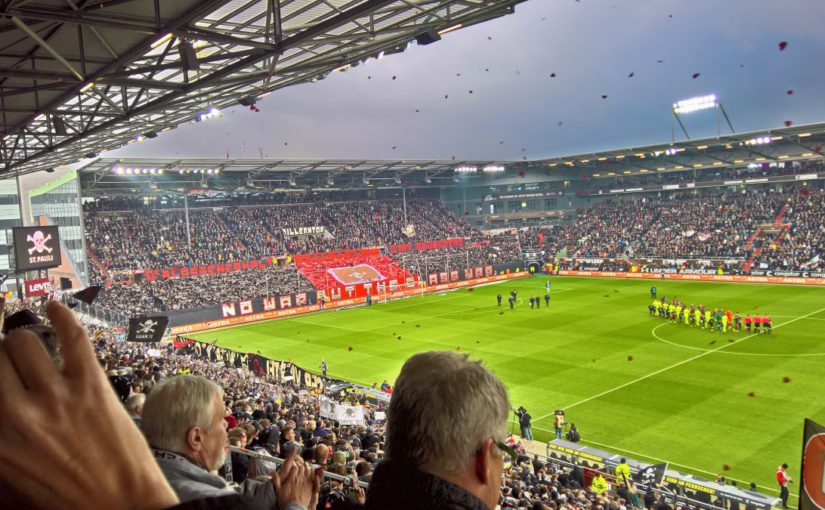