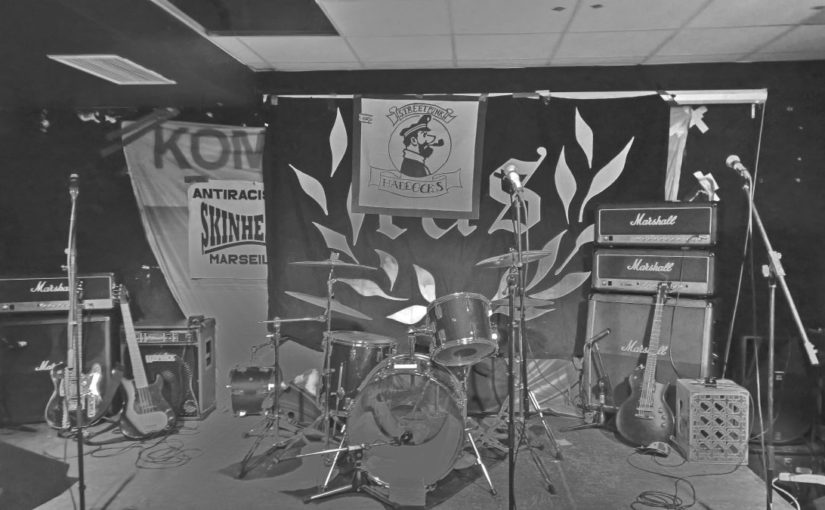 Once somehow loosing interest in German or English Punk round about 1982 me and me mates discovered US Hardcore and … France. It must have been around 1983/1984 when the Chaos Productions records, first the compilations then the records by Reich Orgasm, Komintern Sect, Les Collabos and others hit us and boy did they hit us.

On top we discovered other stuff like Sub Kids („Kids of Glory“ remains one of my hit singles), Camera Silens and Oberkampf. See a great snippet from back then and Camera Silens storming into their über hit „Pour La Gloire“ in front of a very 80s audience:

The most strange thing: They did rarely sing in English and even if they did it was with a heavy accent – we did not understand a single word. But the sounds where utmost catchy and the visuals where a great mix of punk’n’skins’n’herberts – something that in Hamburg did not mix at all.

Unfortunately US H/C then took over full time and i somehow lost sight of how bands developed in France, though great stuff like Les Thugs did catch my eye every once in a while. And  by today some great bands are in full view and have placed France back again with me (and today, do i have to name Syndrome 81 or Lion’s Law?)

So it was a definite date for me when Komintern Sect and R.A.S. where to play in me stadium, just a couple of floors down where i have my season ticket. And on top it was a neat DIY show by the St. Pauli Skinheads, just another worthy reason.

First on Haddocks from Jena and as much as i do love seeing bands and discovering new bands their sing-a-long Oi! Punk did not really stick with me – though they were both firm on their attitude and well mannered.

And that gave way to them French who seemed to be out there in Hamburg in numbers. R.A.S. (or „Rien A Signaler„) where quick to setup and crowded the small stage with two guitars and two singers and sure thing had themselves setup or better dressed for the occasion (and, if i got it right, one them guitar players actually lives in Hamburg).

They kicked off with their signature hit „Rien A Signaler“ from their first 7″ (that dates back to 1983 and one in me collection, greedy record collector scum that i am) and they where boy oh so 1983 indeed. There was nothing polished, nothing fancy and sure thing … nothing in English.

They even got Carl from Komintern Sect onto the stage and got him to sing a song with them (aided by printed lyrics):

For me it was a mixed bag, they had their good moments and they too had moments that provided the feel of „public rehearsal“ – quotes i observed in the audience ranged from „authentic“, „basic“ to „karo einfach“. What did come through was the deep love for the music and being out to events like this.

Next on Komintern Sect and they have come a long way since, for example, this rather old (and somehow funny) TV snippet (and note that The Dogs poster in the backdrop of the dork TV host):

Actually they have come all the way into Blackpool fame, as some people from the Hamburg pilgrims where very vocal about Komintern Sect last year in Blackpool pulling off a great set and making a huge impression on the lot. Though some of the enthusiasm them pilgrims express in context of the Blackpool pilgrimage is debatable it did place a little light into me head to make sure to see Komintern Sect next time round.

And yes, they had it all. Great music, tight set and the extra quality on songwriting. And Carl did his best to converse with the public in English so that the engagement was there.

And they got the crowd moving, they got plenty of sing-a-long and they got a tight set together that lasted much longer than Carl’s voice. He tried to finish but then they had another one. And one more.

Finishing off finally they did in style, a mixed bag of R.A.S. and Komintern Sect doing a neat memory to Micky Fitz and blasting „Real Enemy“ into an extremely satisfied audience.

And with that i moved outside to gain some fresh air (inside was too much smoking) and – thanks to the DOM already closed and being dark – to seek some stars on the clear sky above. Lovely.

Was my thirst for French 80s Street Punk covered? Yes it was! Did i see some neat references? Yes, a Camera Silens T-Shirt, a Syndrome 81 shirt, a Collabos badge and a Sub Kids badge! Did i meet nice people? Yes indeed, amongst them an old fellow from out of town that i have not seen for ages (who still had memories of me and me mates back then in our little fanzine (over-)promoting french bands and declaring „Chaos en France“ as a killer record.

Great stuff, now i need to explore some more French stuff (yet again).