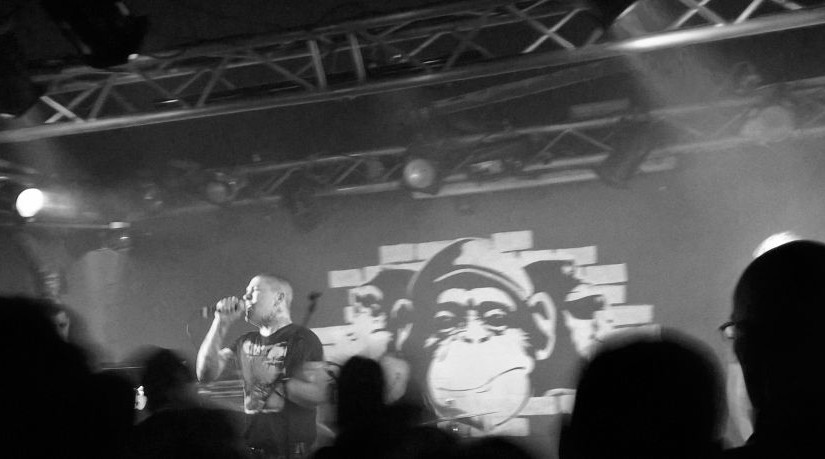 Live mu-sick is the best cure, it also works for getting yer mind focused away from the fact that me love is in hospital. So with a wee bit of a troubled mind i mad way to the Monkeys, first and foremost to see Bishops Green who yet again tour Germany.

Kick off was at 21:11 and large parts of the audience where glued to the TV in the Pub to see Footie (that other team in Hamburg on an away affair). They missed this:

It’s the Berlin Blackouts and they where quite a surprise – great kick-off into the evening. Cool and driving Punk Rock with a good judgement of style: 77, some Social D and loads of drive and melody. Plus: Stage personas! An ever smiling drummer, a solid guitar and a ramonesque Girl on Bass. And an entertainer with guitar in the center on vocals. Short, crisp and should have attracted so much more people!

A brilliant short but crisp set and by all means give that band a home in Hamburg (the singer tried smooth the audience by noting that he would move „…anytime to Hamburg but it is so hard to get an appartment here„) and then give them a bigger stage.

Next Seaside Rebels, who are somehow partly displaced Greeks now residing in London. And the bass player from Booze & Glory does sing. They kicked of rather lame:

It is actually not uncommon – some bands work on record but on stage they disappoint. The Seaside Rebel this night where just not in tune for me and their sound was just too .. simple and boring. Only on few songs the singing and the rest of the band was in a fitting sync. Also the singer did take all the action and thus attention, it was somehow not work. Young lads though that still can grow together.

Next Bishops Green, the 4th time in 2 years in Hamburg – somehow that feels almost „too often“:

They came in straight from Canada, this was the first date of their tour. From the start they where plagued with sound problem, up to the bass player almost too friendly needing to ask „… Mr. Soundman, can’t you set it back to where it was during sound check?„. So the first couple of songs i just felt something missing (guitar in my ears for example) but then they took the Monkeys in full force.

The longer it lasted the more i liked it. Though still somehow the sound of the guitar was too thin. But they have it all: Bass, Guitar, Drums in sync plus a great singer with a voice that differentiates him from those who below low.

And once they finished i was in a better mood and more relaxed, having a loved one in hospital is dreadful and drawing on your energy. This show injected some back and i could sport a neat hangover on Saturday when visiting her.