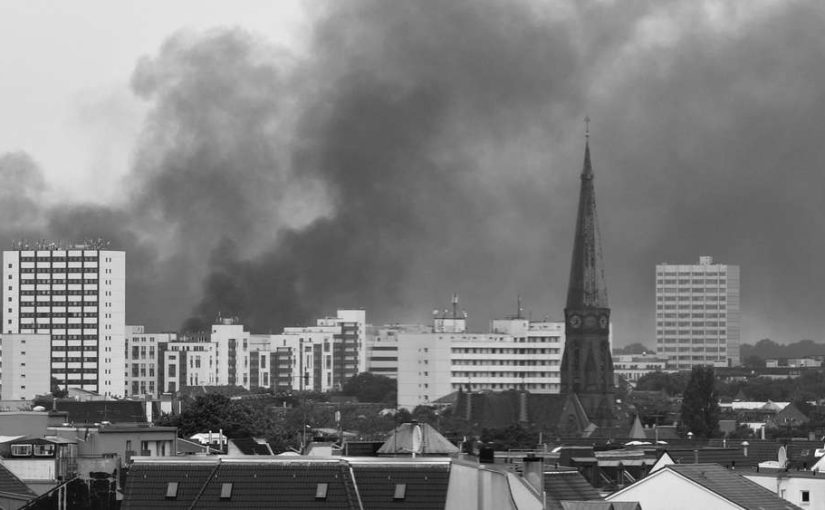 Oh boy, what a fucking weekend. Riots, peaceful G20 protest, 24×7 helicopter terror and a 20.000 strong police force under odd management to protect a bunch of people most inhabitants did not want to have in town in the first place.

Next to the chaos during the days it was also party, mu-sick and fun in the night. First on upstairs at the Hafenklang was Christianes Birthday Bash, a party that was fuelled by two live acts. And a party that provided the charming bass player of Hamburgs rock legends GERD with plenty of gifts and that emitted loads of love.

Surprise guest number one was Henry Cluney of Stiff Little Fingers fame who gave one of his acoustic solo shows – ie. strumming great sing-a-long songs (and sing-a-long the party people did with loud voices) and throwing in some nice jokes. And as a lot of the great sing-a-long hits of SLF where pinned in the late 70 and early 80s under the sound of helicopter rotors during „the troubles“ he must have felt home in Hamburg that weekend!

And thus here is one of these signature songs, try yerself:

That was great stuff with no question on street credibility. He was there, we not! What did stun people too was his guitar which was largely … without a body. Someone suggest it is like one of the folding bikes to enable Henry to fly hand luggage only and that it actually can fold it into a small bag. I guess that one is true. Great stuff and flying start into party and booze!

To take the lot further any Undertones, Descendents or Ramones would have suited, Christiane choose the Melones and thus choose Tommy, DeeDee, Johnny and Joey.

Someone very sceptical in the crowd noted „but they are wearin‘ fuckin‘ wigs“ but he did not dare to test it. It was simply full on Ramones blasting from the stage and light years better than what the Hamburg Ramönes provided 6 weeks back on the same stage.

And it was all in style – though my critical eye noted that two minor details where handled slightly wrong: The joint „forward – backward“ movements of Johnny and DeeDee where not copied correctly and not executed to the required level of precission and Tommy did drum in a slightly different style. But hey, who am i to complain?

And that happy family then took the party to the next level with DJ Starry Eyes providing the dance muzak. The (cheap) booze plus the will to give Christiane a great night and leave outside the non-sense happening on the streets did drive them kids into extra laps and overtime. I was home late and knackered (and me love noted i stink of booze next morning), others had similar stories – what a great birthday bash!

So with some hangover me and others on Sunday eagerly prepared for the return of Rocket From The Crypt. A band that in 1996 and 1997 took us all by surprise and – i won’t stop mentioning it – gave us the future of rock’n’roll. At their 2nd show at the Logo me and me mates all got us RFTC bowling shirts and we wore them until they faded away. I kept mine in good condition so i could – as a first in my life – void golden rule not to wear a shirt of the band that is playing.

Speedo was somehow irritated at the start of the show, as he did remember they played the Knust in 1996 but could not fit the visual in front of his stage with old pictures in his head (no surprise, the old Knust was a cellar in a different part of town and so much smaller).

And like any great showman he took time to direct the lights to his liking:

And once the light was set and the amps on full steam ahead they kicked into the show like this:

Rocket From The Fucking Crypt are back and they are back for good. And better. And it feels like they have not been away (and, technically speaking, they haven’t – they just had few shows over the years due to the endless amount of side projects).

The Knust was well filled (but sure not sold out) and the audience took RFTC straight into their arms (and hearts). A lot of people where sure thing leaning to the older side but that would only ever change if RFTC release something new and return to the touring life – something that i do not anticipate in real.

For me it was just great – it felt like they never actually disappeared. Me mate Frosch, most likely hardcore as a fan, did travel over the years to the rare RFTC shows around the world and not only kept spreading the message but also enlarging his RFTC tattoo (a pity that it no longer gets you free admittance).

They where so much together and so well oiled, it was stunning. The only item that was odd was that the stage of the Knust is big but not that wide, so the horn section somehow was placed to the backside (and mostly out of view for my preferred show position on the left). But all of that was made up by the full visual of the glittery backdrop and the stage dresses: A rock’n’roll show like a rock’n’roll show should be – with a capital S for show.

And by now RFTC have accustomed to the European demand for encores, so they stroll off the stage, come back on and mock fans up about that artificial awol. I’d say it is always the bands choice – if they have more to give or a surprise then by all means go for it. If they are done, then be done.

So RFTC gave us the extra, the bonus, the encore:

Stunning. Just stunning. And just perfect. I do know why i have so many records of them (though within that, there are some songs that are … err … let’s agree on complicated) and i do love them. And that love has just been renewed. And i do understand why me mate Frosch travels to all German shows to see them over and over again – there is something in it!

And sure thing for those who got out on the street and said NO G20 and FCK G20.

And if you like reading with a backdrop of helicopter rotors and them troubles – why not try a book by Adrian McKinty?

Grand opening of Sam’s new venture (with improved facilities since the Crack show) and somehow i managed to perform a vasovagal collaps, so the show ended in a coitus interruptus. Thanks (i owe you some drinks) to some around i was lifted, got a glass of water and then hailed a taxi to take a quick checkup in the hospital around the corner from home. No issues, „you have the blood data of an 18 year old“ the doctor told me – i guess a blatant lie!

I did see most of the Big Banders, Hamburgs rather large Ska 9 piece. The stage sure was too small for them, they where packed way too tight to be able to groove.

Due to my blackout i missed Hamburgs other Ramones cover band, the Melones. Thanks to Luke here is a pic:

What’s the net result: Great place with more great shows lined up, i guess i will need to split my time between Hafenklang and Monkeys now (and throw in the odd other place). Bonus for the Monkeys: Guinness from the tap! Else the evening was 2nd hand, damn. People told me it was a great evening – i tend to believe them!