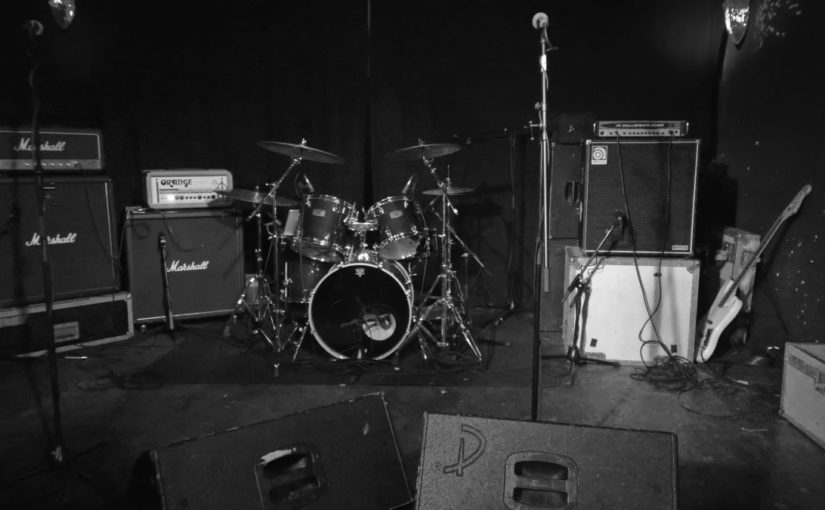 Thanks to Riebe Hard Skin made a short stop-over whilst on a mini-tour through northern Europe and almost packed the Goldener Salon upstairs at the Hafenklang. Nice’n’cozy and quite full, coupled with the promise of a working club show to get us to bed early, so that we can be up early for work on Monday.

Hard Skin seemed a wee bit tired (after a lengthy drive from sunny Malmö) and Fat Bob being a bit under the weather from a cold. Nevertheless they armed the stage just short after 21:00 and blasted into their sing-a-long hits – but not without complimenting Exhibit A for the nice tits (and making it clear that in some jurisdictions shirtless dancing means being expelled from the premises, something that in hindsight might have been a good idea in the first place).

But all of that did not stop them to tip off to Status Quo:

Besides some awful behaviour in front of the stage by Exhibit A, Exhibit B and Exhibit C it was all that a Hard Skin show needed, though sans some of the lectures normally given.

Whilst Hard Skin where Hard Skin the Exhibits made themselves … Exhibits. A was taunted from the Stage, B was moved into the silent corner by force at one stage and C tried to take it on with Fat Bob and got removed. Following the removal Hard Skin suggested to bring everyone back altogether and set sail into “If the cunts are united”:

… and because Exhibit C decided to take some fights with himself, with Exhibit D (like Drunk) and the world as such outside the club the song got stopped. Exhibit A by now had a shirt on, Exhibit B was no longer seen … it is quite a long time ago that i did see so many Exhibits at a show. Odd.

Nevermind, after a break Hard Skin came back and provided some encore, but still finished the show early enough so that people would get home in time. And thus they gave us (and them exhibits) “Taken Away“:

And, any morale? Nope, there ain’t no lesson hard enough to penetrate them brains (of them Exhibits) – so we better not waste time on that one. We’d rather pass the blame to Riebe for bringing violence, drugs, nudism and … let’s make it wanking to our little, peaceful and quiet community (on our pleasant and flat earth).

So thanks for that Mate! And for the show. The flyer. And the cardboard posters!