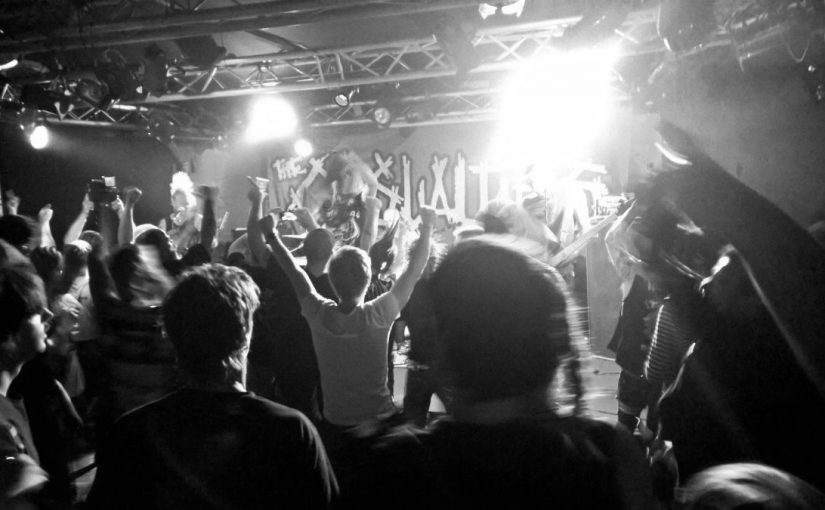 The Monkeys phrased it as „Killer rivets night“ which was a wee bit off but it was a setting for some serious streetwise punk rock (and a resort for some who did not do the pilgrimage to Blackpool).

DMF, self proclaimed Hamburg Hate Punk, sneaked into the rooster and made the start into a rather long evening.

As ever, they played to a rather small group in front of the stage and rarely some movement within the crowd. It wasn’t polished stuff for sure but it also did not strike any chord with me … go and check out for yerself. Appreciation from the audience was small, but i fear that is the hardship of supporting the support.

Next on Topnovil from far away down under and with a kick-start they had all the elements that DMF missed: Tunes, stage presence, showmanship (in a positive sense) and mu-sick-al abilities – this is how they took the stage:

The damn internet (the one that never forgets) had them down (in a local music website in Australia) as:

Topnovil got the crowd moving as in singing and dancing and should actually be on a bigger stage as they need room on stage to move around and do little funny stunts with their amplifier cases as platforms. Clever trick indeed!

A great and tight set and with loads off applause (though with some surprising technical issues of a non-working guitar). I guess they need to leave down under to really have success as touring that continent must be a struggle.

With some delay Total Chaos where ready to take the stage next and boy did they surprise me:

From the first chords and into the first song it was like a bulldozer coming upon The Monkeys and pushing the audience forward, forward and then some more. Fun fact: The bass player borrowed the „amplifier case platform“ trick from Topnovil and got himself a prime spot thus (against the rest of the band he needed an uplift as they all towered him).

I have seen Total Chaos before and did not particular dig them and thus have to admit that i was more then surprised to be engulfed by that wall of sound they delivered from the stage. Tight, fast paced and with a load of energy and commitment.

I think i need to put their early Epitaph records back on the player and re-accustom myself with their newer stuff. And a stark reminder to judge bands by the live performance and not too much by their recorded and released output. On this tour they seem to be just perfect, so go and make sure you get to see them!

And that gave way for the „headliner“ of the night, a quarter past midnight The Casualties took the stage and speeded things up further:

And indeed the crowd took things a bit further too and quite a large dancing pit evolved. The Casualties took no hostages and killed song after songs with high speed street punk. Some even tried to stage dive from the tiny elevation of the stage and should have known better but it was at least a try.

Way after 1:00 The Casualties left the stage and invited the audience over to the bar – both the band and the audience soaking in sweat and thirsty for beer.

A stunning show with a surprise winner in Total Chaos. And the Killer Rivets? Little where seen and nobody got hurt.

But still there was a negative déjà-vu: There seems to be a new and annoying dancing style that involves a giant mutant baby punk to ignore the music and just have his eye on pushing people around and slamming his shoulder into those who actually want to dance.

At the Dickies show this resulted in justified pit violence, at the Monkeys i could hear people after the show whispering „… i should have given that bloke a beating, he was just annoying“. If you ask me i will reply „and so shall it happen!“. Same for those who come in the pit with their backpack – don’t you wonder that you are being kicked around! There is fucking wardrobe to place it you cunt! 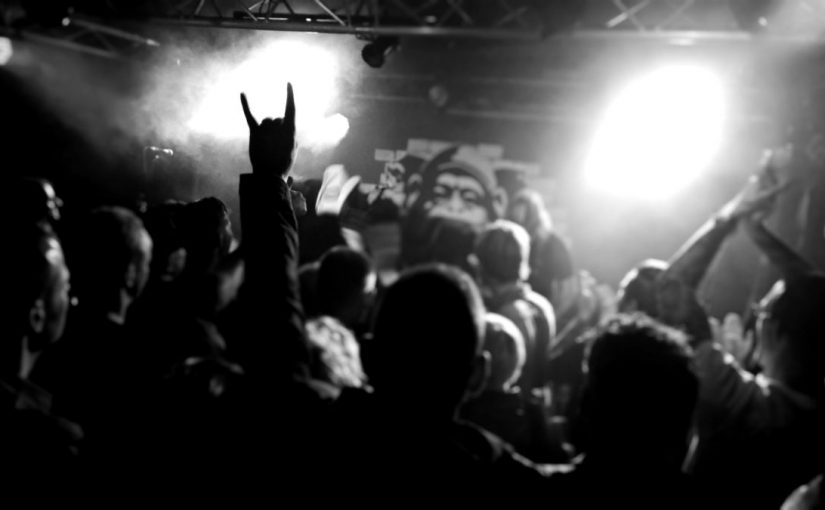 The last time the World’s Greatest Rock’n’Roll Band graced Hamburg with a tight rock show in 2014 and the subsequent tour of the The Worlds Allmost Greatest Country Band a year latter needed to be candled as Eddie Spaghetti was diagnosed with oropharynx cancer and had to undergo surgery and radiation treatments.

Another one down with that goddamn big C i thought, but luckily Eddie made it through (thanks to fans putting in some $ and Eddie Vedder helping out too – the health system in the US of A is fuckin expensive!) and thus 2016 the Supersuckers are back on track.

And with the help of a hired gun on Bass the Supersuckers kicked off, allowing Eddie to concentrate on his acoustic guitar and singing. The Monkeys was well filled and thanks to some marketending free drinks from Sailor Jerrys Rum prior to the show also well intoxicated.

Key question first: Did that fucking big C do any harm to Eddies voice? Mmmhh, not sure – i found it a wee bit more raw and less powerful but who am i to judge. For the more somber country stuff for sure it worked and the band got into the rhythm rather quickly – they are a well oiled machine!

As always with Eddie and his troops the interaction with the audience was little but making a nice joke of the rock star stardom up to and including asking the audience to cheer on the well orchestrated song endings – incl. synchronised guitar moves in the air. Rock! And! Roll!

I do like a rare country song thrown into something heavier, a full country show just does not get me as exited as other stuff (though i wonder why the Supersuckers not also try to branch out into a stiff Surf record – besides the musical capabilities it would also fit their bill i’d say) but 2/3 of the audience where quite happy (the other 3rd left, i guess they did not expect an all country set but rather the rock one). And as always, Eddie took a middle finger pic of the audience, so above is how Hamburg reacted.

They did 70 minutes and included some of their hits in a country version – all in all a tight set, a welcome break from the hard&fast world and i was surrounded by friendly people (and managed to not intoxicate myself with any booze that evening). Good to see Eddie back on stage and now looking forward to World’s Greatest Rock’n’Roll Band hitting Hamburg hard in 2017!

nb: May i get that Surf record one time gents? 22 Albums and 43 EP’s – there must be room for that! As an alternative i would reluctantly accept an Enrico Morricone themed record too … 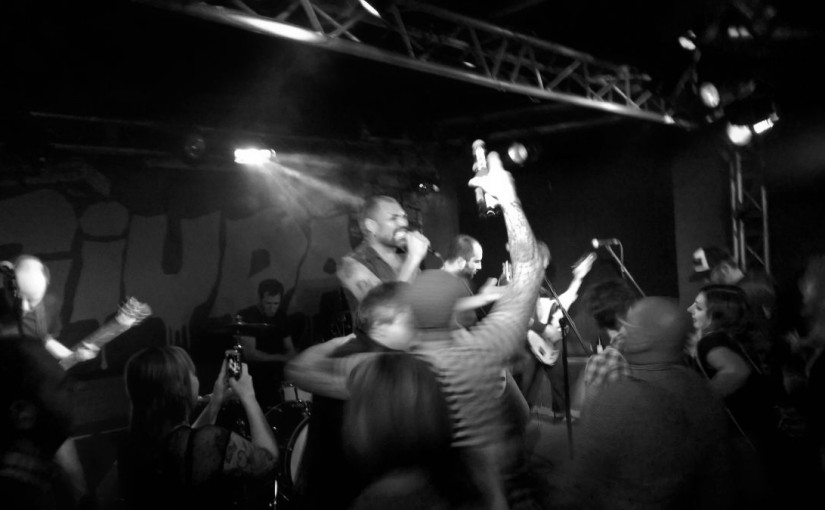 What was supposed to be a super-duper Friday night out starting with a floodlight home win of the magic FCSP followed by some cool Italian mu-sick had a wee bit of a bad start with the odd 1:3 … and the frickin‘ cold outside. So after the footie we made fast way into the well heated Monkeys, to kill the footie anger with some pints of Monkeys Red and some good sounds.

First on The Twinkles from Italy, very late thanks to Sleazy Jet’s own understanding of German Pünktlichkeit. Their lightweight Pop-Punk is not really known up here i guess, though their hit „You’re Poser“ was a minor hit with some (and a big one with my humble self). And they took the stage like this …

It was quite funny and entertaining – next to their own songs they also covered The Beatles, Cock Sparrer and The Boys (and that one most likely being the best one) and seemed to have plenty of fun the longer they where on stage.

What was specifically funny was the way the bass player did hold his instrument and did play it: E-String only (Kraut’s „Flossing with an E-String“ came to my mind). Non-Versatile would be euphemism i’d rekon. But they made friends with their summer influenced light weight stuff and has a bit of a school band charm. I did love it, others kept moaning.

Next on Giuda and the space in front of the stage became rather tight, though it felt that it was not really a sell-out show. As ever Giuda hit the stage quickly sans singer, who joined through the audience. And they hit off like this …

Absolut perfect sound, absolut in sync. They have perfected their 1973 retro sound even further, without loosing the edge in live performance. On record though i felt the last album to be a bit too smooth, to much softened.

Hard, fast and driven by the guitar player that does keep himself back to the left, i think he is the mean machine behind the Giuda sound – just perfect!

They performed a good mix of old and new stuff and they got the crowd moving on all counts. What was notable though was the high  number of ladies in the audience and to the front, quite a different feeling to the else male dominated punk and hardcore circut.

At the end they finished the set just within an hour, short to my liking but they are on a tour that makes them criss-cross Germany every day so there is some sympathy. What was also notable was that they still lack „any“ communication skills with the audience, though they neither please them or fend them off: They either just want to have the mu-sick speak for them or there is a language barrier.

At the risk of repeating myself: they have created the perfect niche for themselves and they actually deserve some success. I am a Giuda Fan!