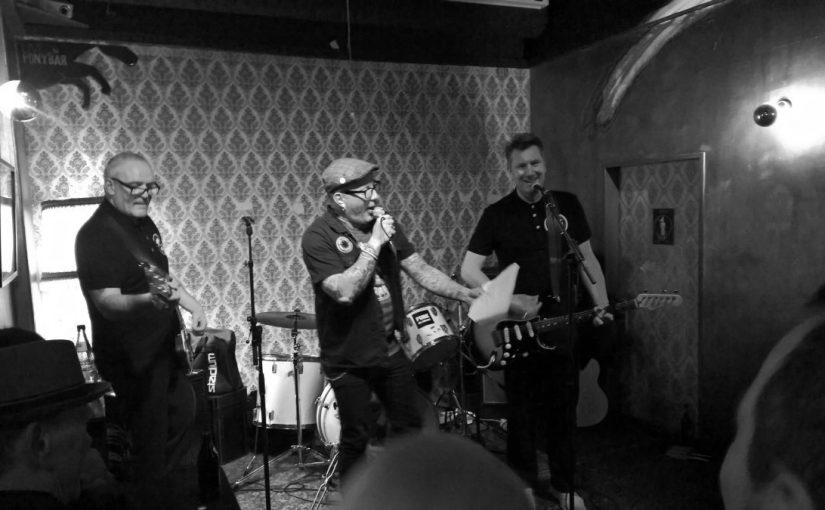 Jam Today have enlisted a new drummer (at great expenditure) upon departure of Meng, their long time and sturdy drummer boy. And they have some upcoming shows in Hamburg (on the Hedi) and in Berlin (on just another cruise ship). As such they invited friends and fans into the Pony Bar’s tiny backroom and took the small stage for some warm up.

As a warm-up to the warm-up Kent Nielsen and Thomas Christian aka Ukes of Tomorrow provided some bona-fide Ukulele version of classic punk (and other) songs. One some songs it works well, on some other not. Some drummin’ on a wooden box might help to get some backdrop variations but hey, who am i to judge?

And that was to the 40 year anniversary of The Damned, well done and in time!

Next Jam Today, in clean suits and brand new polo shirts – they really go the extra mile to make themselves attractive. Though some in the audience with an eye for detail made some comments on the shoes, not really up for a proper suit setting.

Outsch! Warning: Public Rehearsal! Helge’s Rickenbaker sounded like a tube had gone on his amp, Lui’s bass cable had a break and dropped in/out and his mike also had issues. On most songs. Damn. And the stage lights – god awefull!

In the end they sounded better and better, the new drummer got cooler and by the last songs they where at it, though they made Kent sing one too. So the choice of warming up was a good one, now make Hamburg proud when you play that cruise ship in Berlin with the Sex Pistols Experience!

PS: Fashion police ctd – that baseball hat needs to get off that drummer, that ain’t Jam Today style!