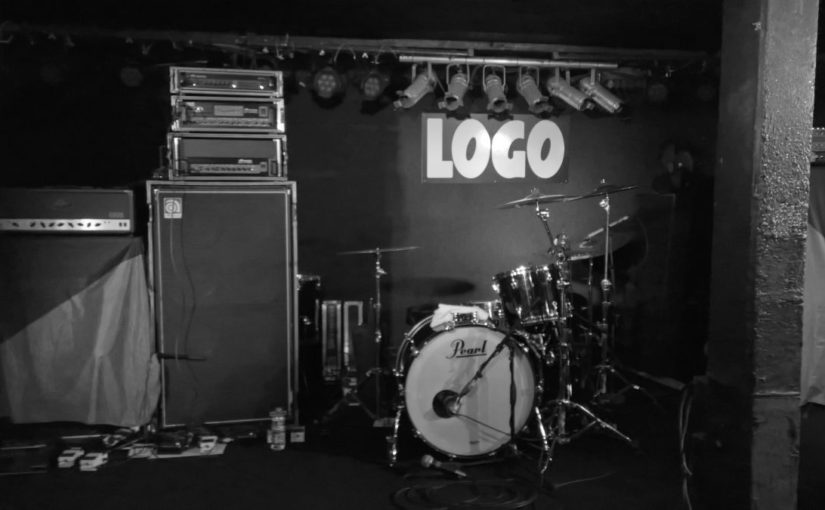 It was first set to happen in the rather spacious Markthalle, a setting by some people called „ambitious“, and that was the reason why i did buy a ticket upfront at a rather high price.

But soon it was moved to that black shed near the University called „Logo“, a sweatbox with 1/4 (or less) of the capacity. And even that place was only like 3/4th full on a rainy Sunday night. And, with 5 bands on a stretched but small stage, the breaks and changes between the set was a to-come annoyance for sure. First off WOLF x DOWN and the singer ruined it for me with a „Yo Hamburg, was geht“ intro. 5 angry young man in black and with a cause, 3 die heart fans in front of the stage singing every song and … a sound that i do not really dig.

Whilst they where technically gifted and their songs where together i just did not like the beat and the bellowed vocals, that ain’t my shit.

Next on Walter Schreifels (ex-Youth Of Today in the late 80s), who orchestrated the Tour, with his new Band Vanishing Life, for the first time in Europe. And what a stark contrast that was against WOLF x DOWN! 4 really different and distinct stage personas: A gifted guitarist that was able to pull sounds from his axe (and his massive FX-board) that i have never heard before, a tall dark bass player in a very stylish outfit, a sturdy drummer in the back and … Walter in a non-hardcore outfit singing with loads of echo but getting across clear words.

Wow! I was taken away – great sound, grounded in Punk but expanding so wide out. On top of that some few choice words by Walter on life, the scene and music as such. They took me so much left wing – i had not recognised their fantastic LP at all, an error soon to be corrected! And i demand them for eg. Get!Lost!Fest!

Here is a snippet for those who missed their output too – and then go on and buy it for fucks sake!

And that paved way to Trash Talk, from Sacramento, who took the proceedings into a different direction: A mix between short Hardcore bursts lasting not more than a minute and of lengthier dirty rock songs – in almost perfect fashion!

They also now had the crowd going, either individually or collectively and i also saw a rather slim girl running across the stage and throwing herself into the audience like a torpedo! Another Wow for the mu-sick and again the difference of the stage personas made it so much more worthwhile to watch.

If you need a reference – this is how it feels:

With Trash Talk being active, open and embracing the crowd it took only one change and the dimming of the lights to throw not only a complete different image but also a different style: Of music and of interaction with the crowd. None. Welcome American Nightmare, one of Boston’s finest outfits!

Now we where in just another territory – rock solid 90’s Hardcore Punk with a deep grounding in Punk and done in perfection. The only items that did annoy me was the complete lack of interaction with the audience, by the backing trio and specifically by the singer – he did not even look into anybodies eyes. But still, great stuff and if i am not mistaken the first time they graced Hamburg!

Here is a little story line on their re-union:

And that took us to the headliner. Ray was busy in the afternoon to give a Yoga class under his assumed name of Raghunath Cappo, which he took on when he left the NYC H/C scene for a life as a celibate monk in India, studying old texts and Yoga methods. And what took the stage was their so called „classic 1988 line-up“ with Ray, Porcel, Sam and Walter (who takes Bass duties in Youth Of Today).

They got the crowd finally forward and into flying mode but, as one of me mates mentioned prior to the show when he turned down attending, they or rather Ray spend also a fair time explaining some simple truths to the audience. So you got 50% classic NYC H/C and 50% something for your brain – an equation that actually could be worse although he was largely preaching to converts.

Fun moment was when the Italian Youth Of Today super fan Andrea from Turin was handed the mike and he could not manage that big cheque – Ray kindly reminded him that if he wants to sing than he needs to give it all to the audience and not keep it to himself!

Would this have been fun on the big stage of the Markthalle and say 300 people? Nope, far from. Would it have been fun with 1.000 folks – yes it would. So the move down to the Logo was ok though i would have loved if they would have taken the Hafenklang and split themselves up between upstairs and downstairs. That would have worked better.

As a diverse setting and branching out into different territories of Hardcore it did work for me, though i did have my problems with the styles (BEARDS!) of the audience and some dancing styles (trashing wings running into the boarder of the pit), specifically when it is hurting people and comes with a macho attitude.

Thanks for pulling this one together Walter, much appreciated. With two Amercian Nightmare T-shirts (one for me mate Frosch, who was in Portugal, and one for me Love) and the Vanishing Life LP (in coloured vinyl, record collectors are pretentious arseholes!) i took home, being positively infused for the workweek abroad in London (i may choose to see them again there).