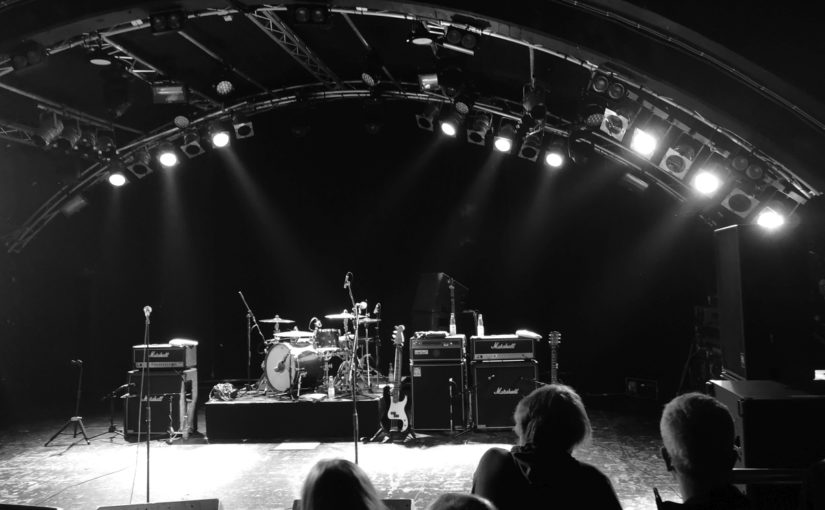 Two years ago The Undertones surprised the lot at the Markthalle big time – an endless barrage of 2 minute party hits delivered in a maximum joy setting. As such the return to Hamburg as part of the „40 Years of Teenage Kicks“ Tour was a fixture that even lured people from far, even a mate of mine from Rotterdamn came over after being blown away by them during their September show at the Paradiso in Amsterdamned.

It was an early night as they even sported a support band, but me and me mates happily let go that opportunity. And once it was 21:00 it was time for The Undertones, kickin‘ it in for i guess 850 odd people:

And from the first chord something was missing. On the one hand the „Undertones“ logo on the backdrop (has it gone AWOL?), on the other hand something with the sound was not 100% to my liking.

Nonetheless the only valid start if your tour is „40 years of Teenage Kicks“, as this was the A1 from their 1979 debut album. Most likely that record everybody has in his cupboard though it lacks said „Teenage Kicks“ (as it came out a year ahead).

What i did like was the humble setting on the big stage: Two Marshalls, one AMPEG and drums on the riser. Three mikes. And loads of free space that was rarely used, as they tend not to roam around that much. That „tend“ does not account for Paul McLoone who sometimes likes his Morrissey poses way too much (for my and some of me friends liking).

Did the rest of the audience like it? Yes they did!

For me it was slightly less enjoyable than in 2016 as they played less songs and did threw in a wee bit more that came out later. Sure thing that is my very personal problem and they have all the right to give the audience a full view of their 40 years – it is just that i have a wee bit a narrower view on them.

Still, it was lot’s of fun and we even got Teenage Kicks twice in the set as a customer in front of the stage complained to the band that he was delayed into the show and missed the first instance. Sure aiming to meet customer demand they did threw it in again – nice trick.

If they come back every other year and if they but a different spin every time then i will still be loyal and go and see them – they deserve it, as they continue to be humble and friendly  musicians from Northern Ireland.

And they played my loveliest song too … here it is straight from a January 1979 Peel Show with an intro by the honest John Peel himself:

And for me and me mate the night ended in way too much beer, and then some more. And then being thrown out of the venue (due to closing). But there are more humble and friendly Nothern Irish lads in Hamburg – one manages a watering hole not too far away and we even got a free pint there to top the night.

I can assure you i had a decent hangover going to the St. Pauli game on Saturday and that little snippet tells you actually how great The Undertones have been, are and will be. 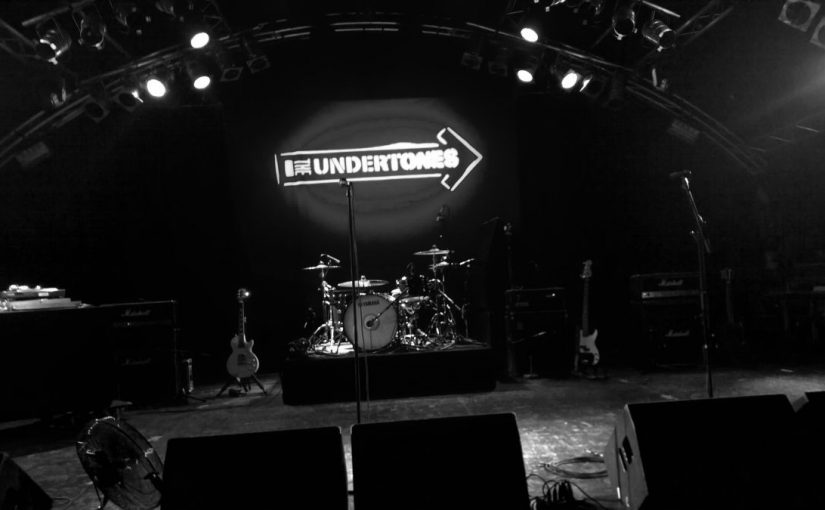 In Hamburg we have a saying that goes along the lines of „…if a party is in doubt throw in some Undertones and folks will dance and sing-a-long“ which is pretty much a true statement: Rarely a band from „back then“ has material that is as crisp, almost pop like and literally transporting a smile into peoples faces.

As such it was no surprise that a rather large crowd was up for just another „fond memories“ show at the Markthalle, where plenty of people felt like in a time machine: The sample around them was the same as in 1981 when The Undertones played Hamburg for the very first time.

DJ Tikiboy kicked off the proceedings and flooded the empty Markthalle with some neat sounds – but as most others i stayed at the bar and talked to many of me fellow oldpunks. I heard some reggae tunes, some NDW – no punk (at the request of The Undertones actually).

Quite early on at 21:00 The Undertones entered and kicked it off like this:

Unpretentious, smart and full of energy! And from the first vocals some of the doubts of some folks in the audience where settled: It is The Undertones and they do work sans Feargal – and that sine 1999 actually. So get used to it! Already now quite some sing-a-long in the audience and smiling faces. This is the real deal!

And without further ado they entered into what can only be described as the perfect party set: 34 songs in 90 Minutes, that is about or just less than 2 Minutes per song. What a perfect math! It really felt like an unstoppable party machine!

13 songs later they reached „Male Model„, just another smasher from the fantastic 1979 LP:

And the party just did not stop, on position 22 of the playlist comes „Billy’s 3rd„:

… and that is just another hit from that very same record that can stand the test of time. By now the audience was fully engaged, people moving, singing and a large part of the contingent had a smile cemented into their faces. Just great to see how Hamburg loved them (and odd that they do not come over on a more frequent schedule).

After a short break they came back and started they 10 song encore like this:

What can i say more than they know their trade and happiness was all over.

And down to song 27, can they still pull something special? Yes indeed – it was hats off to just another Northern Irish legend: „Just another Teenage Rebel“ from The Outcasts was thrown at the crowd and they loved it!

Next it was time for just another sing-a-long stomper from long ago (and most likely the 7″ with the smartest footie cover of all times – Subbuteo, hint hint):

Cool as fuck and just confirming that they are … just … so … smart. Or smarter?

Yep, they are. Without the slightest doubt. Some might call it „lightweight“ pop and dismiss it for that but i just phrase it out: pop is popular and by all means The Undertones play popular music. Period!

And once they where done and the playlist was completed they just could not stop and threw another classic – the critically underrated B-Side of „Jimmy Jimmy“ was to finish the set finally of:

How cool is to start such a show with a 7″ A-Side and then finish it off with the B-Side of that same single? I do like books and movies that at the end come back all the way to the start, that is a cool way of telling a story indeed but on stage? Who has dared that before? Fuckin‘ hell, The Undertones just made my day!

And the search for the 5th Undertone? That was on because Damian O’Neill played his guitar like a left winger that plays tied to the sideline: He stood way left on stage and somehow hidden for some parts of the audience (and you will just about see his head on some pics – he did not seek the stage light!).

In the end that old saying from Hamburg stood strong: If you have a party throw in some Undertones – the sun will come up, people will smile and dance. Thank you lads!

PS: Thanks for Christiane (of Gerd fame) and her memorabilia collecting habits we also have the full playlist (sans „Mars Bars“ at the end). Now all be jealous!

A heart throbbing tear shedding documentary about Derry in the 70s and why it needed a punk band to sing about love! A pity though that Feargal Sharkey continues to be „no Undertone“…